In the merry merry Bock of Mai

It's spring – at last, after what seems like four months of snow and ice. That's not a lot to the Canadians and Scandinavians out there, but it is for northern Germany. Finally we can really enjoy the Maibocks that have been impatiently sitting on the shop shelves since mid-February. Yes, in Britain it's the easter eggs that arrive two or three months early, in Germany it's the seasonal beers....

Maibock is a relatively recent addition to the German beer canon, although it is recognisably part of the wider Hellesbock (pale bock) family*, and is quite similar to Dutch Lentebock. Most of the Maibocks I see are Nordisch (Northern) ones – not too surprisingly, given that we're less than 100 miles from either the Baltic or the North Sea – but there are quite a few Bavarian Maibocks too. However, in the south they must compete with the tradition of Märzen, which historically was brewed up until April. For example. the Osterbiers (easter beers) I see from down south are mostly Märzens. 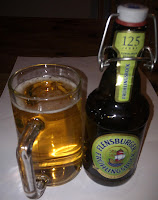 Also called Frühlingsbock (spring bock) by some, Maibocks are malty, but typically hopped up, drier and a little more bitter than other Hellesbocks. They range from amber to gold, and the hoppiness is often spicy, green, maybe lightly pine or citrus – and yes, it is intended to make you think of spring.

Certainly, the Einbecker, Dithmarscher and Flensburger examples are very much in this mould. There are exceptions of course – for instance, the Maibock from Vielanker, a microbrewery in Mecklenburg, just the other side of what was the Iron Curtain, is perhaps more like a Märzenbock, if such a thing is possible. (And if it's not, why not?!) 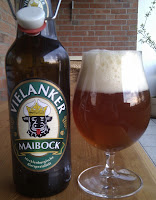 As I mentioned, look south and things change a little – the Maibocks are often maltier and, well, Bockier. Some claim this relates to a tradition that late April and May were the times when the first new Bocks of the year were tapped, though as with so many German "traditions" I'm not wholly convinced, especially since we have Doppelbocks and Winterbocks through January and February. It could well be that the fresh Bock of May is inevitably a hoppier beast than the aged Bocks of winter, I guess.

And no, I don't know why the northerners seen above are all 33cl stubbies while the southerners are 50cl long-necks. Nordisch quirkiness versus stolid Bayerish tradition, I suspect!

*Some people argue that Hellesbock (or Hellerbock) and Maibock are the same thing. I disagree – not least because Maibock is seasonal in availability, whereas the likes of Andechser Bergbock Hell are available year-round.
at 9:26 am No comments:


British plant geneticists have revived a Victorian barley variety, and used it to brew a "heritage special bitter". The barley, called Chevallier, was revived from seed in the genetic resources unit of the Norwich-based plant research institute, the John InnesCentre. JIC scientists collaborated with Sunderland University's Brewlab to evaluate Chevallier - apparently it has "valuable disease resistance that can prevent contamination of grain with mycotoxins, which are a concern in the malting industry."

They went on to grow half an acre of the grain, which was floor-malted by Norfolk's Crisp Malting Group and then sent to Stumptail Brewery who turned it into a 4.7% nut-brown ale with "a rich malty flavour and a lasting bitter finish." The ale is being launched next Friday in Norwich, to celebrate the start of CAMRA's annual member's weekend in the city.

"We wanted to find out how the variety performed, what the malt was like and how the beer tasted,” he said. He has now registered Chevallier as a conservation variety, and received a £250,000 grant from the Biotechnology and Biological Research Council (BBSRC) to explore its commercial potential.

Sadly I can't get to the CAMRA AGM, but maybe I will get a chance to catch up with this beer later. It's certainly a fascinating project - I think John Keeling of Fuller's said that when they started doing historic recreations, the closest they could get was a barley variety from the 1920s. The JIC work potentially takes us right back to the Victorian heyday of Porter.