There is a certain irony in an AB-Inbev brewery recreating a 19th century beer that demonstrates how wildly inaccurate craft IPAs are from a historical perspective. But that is what Goose Island’s one-off Brewery Yard Stock Pale Ale does – although if you look at it another way, it is also bang in line with modern craft beer fashions, being both barrel-aged and secondary-fermented with Brettanomyces. Irony indeed!

Brewery Yard came about after Goose Island's brewing innovation manager Mike Siegel contacted beer historian Ron Pattinson, inviting him to help recreate a historical recipe. Speaking at the beer’s UK launch at the Rake, in London’s Borough Market, Mike said that with Goose Island being inspired by the English brewing tradition he wanted an English recipe, and to give Ron something to work with, “I came up with two things – I wanted it aged in wood barrels and I wanted to use Brettanomyces. He came up almost immediately with Stock Pale Ale.”

“I’d tried to persuade loads of people before to brew this beer, Mike was the first gullible idiot to take me up,” Ron joked. He added that in the 19th century, “Pale Ale [and by extension IPA] wasn’t meant to be drunk young, it was meant to be aged for a long time. For example, bottled Bass was probably at least 12 months old before anyone got to drink it. It is a very different concept, the complete opposite of how we do IPA today – people liked the aged flavour and were willing to pay extra for it.”

Unlike Porter, which was aged in giant vats, Pale Ale was aged in barrels. In some cases they were just left stacked for months in the brewery yard, hence the new brew’s name. Stock, which meant aged, was the opposite of mild – Ron pointed out that Mild was not originally a style of beer, it simply defined how the beer was treated before sale: “Mild and Stock would have been the same recipe, except Stock had 50% more hops and a secondary Brett fermentation.” 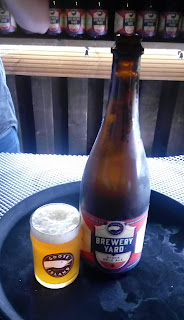 Based on an 1877 Trumans recipe for a Pale Ale from Burton-on-Trent, Brewery Yard seems about as authentic as you can get using modern ingredients. Mike used floor-malted English barley, plus English Goldings and US Cluster hops – American hops were widely used in Britain in the 1800s, but for bittering and their preservative value, not for their flavour which was generally disliked. In the absence of the neutral Memel oak barrels that 19th century brewers preferred, he took Bourbon barrels that had already been used for beer twice, so most of the whiskey character was gone, and steamed them thoroughly.

“It was a year in the planning, it spent 11 months in barrel and was then bottled in June,” Mike said. “Two and a half years is a long time to work on a beer project, I had to keep telling Ron to be patient!”

So was it worth the wait? From the drinker’s perspective, very definitely so. The first thing you notice about the beer, apart from its golden-brown colour and initially fluffy head, is a characteristic Bretty aroma – tart and almost fruity, reminiscent perhaps of ascorbic acid. Then there is a potent dry bitterness with herbal notes to it, and a tart woody winey palate. It really is fascinating – and worryingly drinkable for something that weighs in at 8.4% ABV!

Ron reckoned it was also quite possibly the most expensive beer Goose Island has ever done – its Chicago brewery is a 50-barrel (almost 6000 litre) plant, but by the time all the losses in the process were accounted for, there only about 20 barrels left. Of that, just over 2000 litres made it into 75cl bottles, and 600 of those have come to the UK (where they’re priced at £20 each).

As well as losses in the barrel-ageing, a huge amount was lost during hopping – Brewery Yard used whole-leaf hops, which the brewkit was not designed for, and a lot of wort was left in the wet hops afterwards.

“We’re really happy with how the beer turned out, it is truly the definition of unique,” Mike said. It’s likely to stay that way too – when I asked if he’d consider re-brewing it, he implied it was unlikely: “I’d probably look for an even more difficult project!”

It’s great that Goose Island is still able to do projects like this, even if, as one of the other guests at the launch (brewer and Brett expert Ed) pointed out they’ve perhaps played it a bit safe by using Brettanomyces Claussenii, which is one of the subtler Brett strains. And of course one reason they have the capacity for projects like this and their sours at Fulton is that their main brands such as Goose IPA, 312 Urban Wheat and Honkers are now produced at massive east and west-coast breweries belonging to their parent company, AB-Inbev.

The financial weight of AB-Inbev is also behind Goose Island’s push into the UK. The Brewery Yard launch was part of this, but so is the UK edition of its Block Party series tomorrow in Shoreditch – basically an afternoon of live music, with bars and food stalls – and so too was the appointment last year of a European brand ambassador, Josh Smith, who was formerly at the White Horse on Parsons Green.

“We don’t want to send beer over with no support – the storytelling and training is a big part of it,” Josh explained. He added that, unlike US brewers who’re brewing in Europe, Goose will continue to bring its beers in from the US. He explained it’s all about the logistics – an area where AB-Inbev has been a big help – with the beer being shipped and stored chilled all the way.

As well as introducing Four Star Pils and Green Line Pale Ale to the UK this month, Josh is keen to get 312 Urban Wheat as a regular on draught – he sees it as a good crossover or gateway beer for lager drinkers – and on bringing Goose’s seasonals in too. In the battle for the soul of craft beer, it really is 'interesting times'!
at 6:13 pm 3 comments:

Balancing insular vs international on a German island

I finally realised what’s been puzzling me about the beers from the Rügener Insel-Brauerei, a new brewery opened in 2015 on the German Baltic island of Rügen. The Insel beers are very consciously Craft – they are available in both 33cl and 75cl sizes, with attractive and unusual paper wrappers instead of labels, and they are pricey, at almost €10 a litre.

To top it off the beers are all top-fermented* and bottle-conditioned, in a country where making an IPA alongside your half-dozen lagers is still considered a bit adventurous, and Insel produces almost nothing that most people would consider a traditional German beer style. Instead there’s stouts, pale ales, a witbier and several Belgian styles.

What puzzled me though was that the Insel beers I’d tried didn’t seem terribly interesting. Oh sure, they were well made – the brewery was founded by Marcus Berberich, an experienced brewmaster who was formerly managing director at Störtebeker Braumanufaktur in nearby Stralsund, so I’d expect nothing less. (He really does need to sort out their yeast though, as it doesn’t settle well enough and the beers are too gassy, so it’s hard not to pour them cloudy.)

The thing was that they lacked the depth I would look for in a beer in this price bracket, plus they didn’t seem true to style. I wasn’t alone in thinking this – the beers get low marks from quite a few of the serious tasters on Ratebeer. Others seem to love them, however, and they look to be selling OK.

Now though, I think I may have a mental handle on what’s going on here. These are products designed to appeal to gourmets and the fashion-conscious, in a country where beer drinkers have been conditioned by the big brewers (via their disgraceful manipulation of the Reinheitsgebot) to be suspicious of anything different and/or foreign.

So if these foreign-styled beers still seem rather German to me – a Belgian Tripel that reminded me of a Maibock, to give the most recent example – perhaps that is deliberate. A case of taking a subtle German-friendly approach: “Don’t frighten ze horses” and all that.

The odd thing is that once I started thinking about this, my enjoyment of the beers increased. It just goes to remind you how much our impressions of a drink are affected not just by aroma and flavour, but by expectations, price and all sort of external factors, such as where we are actually drinking it.

Will I buy more Insel-Brauerei beers? It’s a slightly unfair question because I’m pretty sure I’m not their target market. I certainly don’t plan to buy more of the pricey big bottles, but if I see 33cl bottles of their sours, say, my curiosity may well take over – it does a lot of that!


*This must make life a lot easier for a German brewer, because the rules are significantly different for top-fermented beers – in particular, what most people think of as the Reinheitsgebot does not apply. (It is of course rather more complex than this, but this will do for a summary!)
at 9:47 am No comments: