The new Blackhorse Beer Mile opens up this weekend 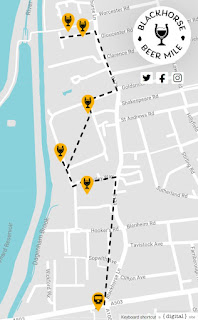 It’s been 18 months of pandemic since it was originally supposed to open, but Walthamstow’s Blackhorse Beer Mile is launching at last this coming Sunday, 1st May 2022. And the delay has had its compensations, because in the intervening time two more breweries have moved into the area: Beerblefish and Hackney.

They join the original four venues – that’s the Signature, Exale and Wild Card breweries, and the Truman’s Social Club beer hall – on a very walkable route up from the eponymous Blackhorse Road tube station.

Will it “rival the Bermondsey Beer Mile”, as its promoters claim? Not on the number of breweries, taprooms and bars, that’s for sure, and Walthamstow’s industrial estates aren’t big on Victorian heritage – but I reckon it’s a significantly fresher route.

It also involves visiting breweries that aren’t anything like as pressed for space as the denizens of Bermondsey’s railway arches. (Just think how many Bermondsey brewers have moved out – often to places like the Walthamstow industrial estates…)

Anyone, the fun kicks off at noon on Sunday, and we are promised “exclusive beers, live music, street food & brewery tours all day.” Looks good to me!

Yes, I know it was originally pitched as “Tottenham”, perhaps to capitalise on the nearness of Pressure Drop and Beavertown (until the move to Enfield), but it’s actually E17 not N17, and the two are separated by the River Lea.