What’s the chance that, two weeks after you go to a conference in a new-to-you location, you’re invited to celebrate a friend’s “significant birthday” – that’s one with a 0 on the end – via a weekend of events in that very same city? 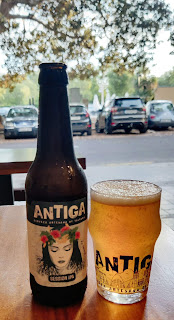 The best beer venue we found on this trip was Barbacana, which is the brewery tap for Cervezas Antiga whose beers I had enjoyed so much two weeks before. It’s a bit away from the old town on the way to the beach so it’s a good place to drop in and cool off on your way there. We liked it so much we visited again on our way back from the beach too!

I think we got through ten different Antiga beers, on tap or in can or bottle, without a single dud. Their lightly estery and cidery Cream Ale (4.7%) was particularly good, as were the Belgian-influenced Blonde Ale (6%) and their Vienna-style Social Lager that drinks a lot lighter than its 5.5%. It’s a nice venue too, with friendly staff and a menu of bar snacks and light meals, street-food style.

Our second favourite this time was Valencia’s international beer bar, Beers & Travels. This is clearly the place to go if you’re into Belgian or German beers, but it also has a decent range of Spanish and other brews, both in bottles and on tap. It’s where I found 1906 Galician Irish Red Ale (5%), a toasty and malty-sweet beer from the makers of Estrella Galicia lager, and another DouGall’s beer, their delicious lemony and piney IPA 4 (6%). 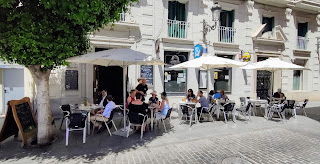 They also have Sidra, or Spanish cider, on tap, but for my last one before the trek to the airport I went for more Spanish Märzen. This was another 6%er, namely Del Sur from Cervezas Alegría, a local brewery I’d not encountered before. It was a little unusual for Märzen, with biscuit and coffee notes alongside the sweet toasted malts, but rather good regardless. 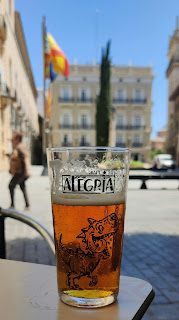 The rest of the time we just enjoyed the excellent birthday weekend events. These were mostly at mainstream venues, so they were less craft and more Mahou Cinco Estrellas and Estrella Galicia  – these big Spanish brewers do like their starry lager names. But we did manage to find a few more interesting things to drink as well.

It started on the very first day, when we stopped for the set lunch at a randomly chosen backstreet restaurant, and saw Damm Turia on the menu. Barcelona-based Damm is a macro, and yes, its best seller is yet another Estrella lager, but like several other big Spanish brewers it has a notable German influence. Turia is its 5.4% Märzen, and while not exceptional, it’s pretty decent and reliable – and I find it more welcome on a hot day than a rapidly warming pale lager. Rather unusually, they also do a seasonal Double-Märzen, called Voll-Damm and weighing in at 7.2%.

Something else you may see at some mainstream venues is more of the 1906 range from Hijos de Rivera, the makers of Estrella Galicia. Most likely is 1906 Reserve Especial, a 6.5% strong lager that’s malty-sweet and lightly toasty – they claim it's a Heller Bock, I have my doubts. 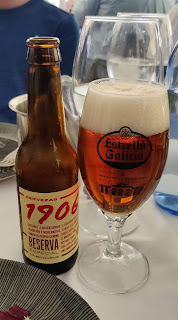 We also found a few local craft beers in a Consum supermarket – La Mari IPA, Borinot Tostada and B&B Hoppy Flower, for example. They were OK but nothing special – par for the course, I guess.

Well, there you go – I hoped to add a few more good beer venues to the list, and while I guess two counts as “a few”, it’s not many! But if you add those to the ones in my previous Valencian travelogue, you have a pretty good number to aim at. Just be aware that some places don’t open until late in the afternoon, and some don’t open at all early in the week – presumably so the staff can sleep off a busy weekend.

Overall, I was pleased with the local brews I found. Sure, some of the brewers are pretty obviously in it to make some money riding the craft bandwagon, but their beers were still well-made and drinkable. And with Spain not having much of a historical beer culture of its own, you’ll mostly find international beer styles, although there’s a few now working with local speciality ingredients, and even Spanish-grown hops.

This is a follow-on to my earlier post Beer hunting in València.

After two years of almost all such things being online, it’s both a huge pleasure and a slight shock to the system to come back to in-person beer judging, this week Champion Beer of London at the Ealing Beer Festival, and last week in a Kensington hotel for the World Beer Awards.

A big part of the pleasure is of course meeting old friends and acquaintances, making new friends, and simply spending time with like-minded people. The shock was the same but in reverse - feeling out of practice in such an environment (although if truth be told, sometimes you wonder if you ever were in practice!).

Ealing also brought the pleasure of arriving to find the beer festival centred on a circus-style big top. This housed all the bars and CAMRA stalls - and for that morning only, the tables for the beer judging. The rest of the week, the tables and chairs were as usual distributed across the enclosed parkland - and since the enclosure includes a few of Walpole Park’s mighty oak trees, there was at least some shade. One of the benefits of judging at a beer festival is of course that once you’re done, there’s a beer festival to attend - and Ealing's a good 'un! That’s schedules permitting, of course, as I know one or two judges had to zoom off not long afterwards, in at least one case to prepare for the following days’ brewing.

It’s also usually a shorter process, with one or two flights taking perhaps two hours, whereas the big international competitions are pretty much whole-day affairs. At WBA, for example, my table had nine flights, each of five beers, to get through - they’re tiny measures, to be sure, but each has to be assessed for flavour, aroma, quality in general, and trueness to style. You’d think brewers would get the latter mostly right, and yes, I suppose most did, but there were a few rather odd outliers!

I mean, I don‘t have a problem with a brewer making what they want or enjoy - but to then claim it’s something different? And the country of origin was no guide here. We seemed as likely to get a stonkingly good, true-to-style brew from China as a dodgy one from Western Europe!One way in which the two events were alike was the little bit of disappointment afterwards, when I realised how many more people had been there that I'd been hoping to meet, but somehow I had missed them. Then again, Ealing was a big open-air space and I had to leave by 5pm, while WBA was a big room with all the tables widely spaced.

And the space was welcome. After my bout with Omicron last month, my sense of smell definitely diminished, which is not good if you want to judge beer. Thankfully, it didn't disappear completely, and after a week or 10 days, it had largely returned. Still, I have no desire for it to vanish again, so space and air circulation are good!