València, like many – or perhaps most – Spanish cities, does have craft beer but it can be hard to find. Most places will offer you Mahou, San Miguel or Alhambra, which are actually all the same company.

Maybe there will be something excitingly foreign, like Guinness or Heineken. They might even have American IPAs from Founders of Michigan – which is less surprising than it might appear as it’s owned by, yes, Grupo Mahou-San Miguel...

But to find Spanish craft beer, and especially local craft beer, you’ll need to look a bit harder. Here’s the places I found on a recent visit to València that are well worth a visit if you’re in town. 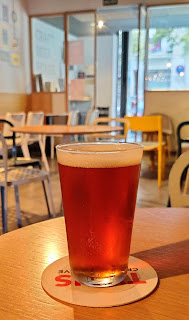 Olhöps Craft Beer House is hip, modern and international in that American-inspired but actually very European way. Grey walls, pale wood, mismatched but modern tables and chairs, and a menu of mostly Spanish plus a sprinkling of foreign beers – Croatian, German, quite a few English. Indeed, as I write this I see they have a Northern Monk tap-takeover going on.

I enjoyed a Paquita Brown from local brewery Tyris – they call it Brown Ale but to me it’s closer to a Brown IPA, with its toasty malt and orange notes and firm bitterness. Next came a hazy IPA from a brewery I’d not heard of before: Freddo Fox, from up the coast in Barcelona. Called Born to be Perfect, it’s a great twist on the style – pulpy fruit, delicately herbed and a delightfully light finish. Lastly, and to remind myself that not all Russians are orcs, Echo Passage from Moscow’s Zagovor Brewery was a juicy-dry and boozy Double NEIPA.

They have a second venue, Olhöps Craft Beer Lab, not far away. I didn’t get the chance to visit but it looks to have a similar range with mostly Spanish and English beers. Another time!

I mentioned Cerveza Tyris above, and a couple of days later I found myself near their taproom in the old city, Tyris on Tap. It’s an example of European cool and modern – lightly distressed wood and metal furniture, a swirling mural of the brewing process on the wall, and with a full kitchen out the back. Seven Tyris beers were indeed on tap, including their core brews and a couple of seasonals.

Spanish brewers trying to be Craft with a capital C can be a bit heavy-handed on the bittering hops, and so it was with the Tyris Märzen, nicely toasty and very drinkable, but for me it’s rather too bitter for the style. Rather better was Au Yeah!, an American IPA that’s part of their core range – it’s honeyed and smoothly bitter-sweet, and altogether well assembled and balanced.

Around the corner from there is a very different venue: The Market Craft Beer, which put me in mind of a hybrid between a Dutch cafe-bar and a British pub. All aged dark wood, bare floorboards, and an eclectic mix of cans, taps and memorabilia. Mostly Spanish beers on tap, plus one Croatian and Weihenstephaner Vitus which, as a 7.7% Weizenbock, I’ve never seen on tap before.

Prices are a little higher here, but there’s several stronger brews too. I kicked off though with God Save the Session IPA, from Madrid’s La Quince. Assertively hoppy, drying and light, it does what it says on the tin… Next was a Spanish interpretation of a British style for a change, instead of an American one: a modern ESB called Pint of Guv’ from Navarre’s Naparbier.

I liked this, with its toasty-dryness balancing the sweet malts – a Fuller’s ESB devotee might not go for it, but it reminded me of some of the collaboration ESBs Fuller’s has done, such as with Moor. I finished off here with Sant Rock from another local Valencian brewery, Castelló Beer Factory. This is supposed to be a Belgian Dubbel, but once again seemed a bit too bitter – still, it was estery and smooth, boozy and sweet, so everything else was in place. 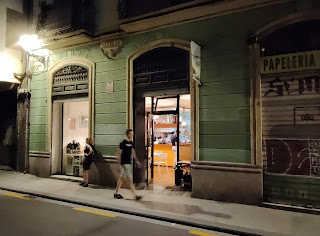 One thing I noticed with a lot of places in València is their narrow frontage. They usually go back a long way, so they’re bigger than they look, but from the outside you can easily miss them, and so it was with my last bar here, the grandly-named Buena Onda Gastro Bar & Craft Beer. This is actually a friendly and slightly cheezy mock beach bar, and again it goes way back from the small front bar next to the kitchen – so far back that it reaches the street behind, where there’s a few tables and chairs set out.

There’s just three taps, serving only local beers, but several fridges hold a selection of Spanish, UK and other beers in cans and bottles, all at fairly reasonable prices too. You can look in the fridges or at the empty cans on the bar, but there’s no printed beer list – “I am the beer list!” says the waitress, and she’s right, being both helpful and knowledgeable. 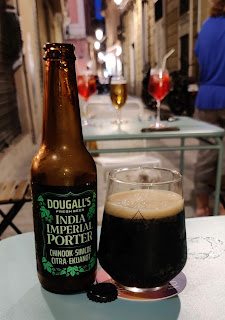 After an extremely enjoyable India Imperial Porter – think chocolate, liquorice, coffee, lots of tropical fruity hops and 8% ABV – from DouGall’s of Calabria on the way back to the metro one night, I liked the place so much I went back for a second visit. Incidently, and as the name implies, DouGall’s is one of the many craft breweries around the world founded by British or American immigrants, in this case an English guy who started his drinking career about 3 miles from me, down the road in Richmond on Thames. (I’m also a bit annoyed to discover only now that they were having a meet-the-brewer elsewhere in Valencia when I was there!)

The following visit, I started with another one claiming to be a Märzen, this time from Drunken Bros in Bilbao. What I failed to spot was that it was 7.5%, and when I opened what was the fullest can I’ve ever seen, sure enough it was more like a bittered-up Bock (also a little worty and oxidised, unfortunately). It reminded me though that Märzen – tolerably authentic Märzen, that is – is well known in Spain, as several of the big breweries make one.

Anyway, after that it was time to check out the taps, as our hostess had just put on a White IPA from local brewery Cervezas Antiga (left). I really enjoyed this – spicy, lightly fruity, juicy-dry and bitter, it put me in mind of a Witbier crossed with a hazy IPA, which I suppose is what you could very reasonably expect from a White IPA! Time then to finish with something dark and warming, and staying with Antiga I chose a bottle of their delicious 9 Grados (9%) Russian Imperial Stout. Rich and warming, with notes of chocolate and toasted treacle under a firm hoppy bitterness, this was just the thing for a nightcap.

There were a couple of other places I'd have liked to try, but didn't have the time. Maybe when I'm back in town there in a few weeks from now!

You can now read Beer hunting in València part 2 here.