There’s a lot for the beer-lover to look forward in London over the summer. I guess it started with last weekend’s Ealing Beer Festival, under the giant oak trees and in the grassy surroundings of Walpole Park – and once again mostly in the sunshine this year. A great selection of cask beers this year, all in good-to-excellent condition.

Perhaps to show that any style can work in cask, my absolute stand-out there this year was a cask Belgian Saison – but then, the original farmhouse Saisons would have been cask, so why not? Called Go With a Smile, it was a collaboration between two small Kentish brewers, Boutilliers and Iron Pier. By coincidence, my second favourite was also Belgian – but not just in style this time. One of the two kegs on the foreign beer bar, it was De la Senne’s Jambe de Bois, an 8%er billed as the most bitter Tripel in Belgium. Lovely!

I wasn’t just there for the drinking, mind you – I was helping judge CAMRA London’s Champion Beer of London, along with assorted luminaries from the world of brewing and beer writing. For the record, the overall winners were:

This weekend, there's still a few tickets left for tonight and tomorrow at Craft Beer Cares, which was the subject of my previous post, then in two weeks time on Saturday 3rd August there’s an open-day at the Weird Beard brewery in Hanwell, after which we dive into the week of the Great British Beer Festival at Olympia (August 6th-10th). That kicks off with the judging of Champion Beer of Britain on the morning before the Tuesday trade session.

Overlapping with GBBF this year, which I guess ought to make it easier for some people to get to both, is London Craft Beer Festival (9th-11th August). It’s back at the Tobacco Dock event space this year, and when last I looked there were still tickets left for all sessions. It’s typically £50 for each five-hour session, but unlike GBBF where most sessions are £11 but you buy beer separately, the LCBF ticket includes all your beer. Then again, your GBBF ticket covers twice as long, at ten hours.

And last for now, but not least, the London Brewers Alliance has announced the date of its 2019 summer beer festival: Saturday 14th September. Hosted in the courtyard and carriage house at Fuller’s Griffin Brewery in Chiswick, this is another all-inclusive event. Tickets are £35-ish including fees, and you can expect to find more that 50 of the capital’s brewers, each pouring at least two or three of their beers.
at 7:37 pm No comments:

Craft Beer Cares, the festival where all beer is donated and all profits go to charity, is back for a third year. It's this coming weekend, Fri/Sat/Sun, at the London Fields Brewery event space in a set of railway arches just off the eponymous park in Hackney.

The sessions will run from 6-11pm Friday 19th, 12-5pm and 6-11pm Saturday 20th, and 12-5pm Sunday 21st July. Apparently there's still tickets available for all three days - they're only eleven quid (inc. booking fees), which gets you a festival glass and enough tokens for five halves or thereabouts. You can buy more tokens of course, and I assume there will also be food and merch for sale as in past years.

This year all the profits - that's £10 from every ticket since pretty much everything is donated, including the volunteer servers - will go to Hackney Winter Night Shelter. This is a charity that provides food and shelter for homeless people during the coldest months of the year. Last year, the festival raised over £10,000 for the London-based anti-violence charity Art Against Knives.

More than 30 breweries, representing some seven different countries, have so far offered beer for Craft Beer Cares 2019. They include:

We already have our tickets for the Sunday - see you there?
at 11:07 am No comments:

The beers we almost forgot

If you’re running a craft beer bar or specialist real ale pub that caters to aficionados, it’s relatively simple – in concept at least, though less so in execution! You offer a range of styles, rotating as often as you can manage, always with something new and/or weird – and also with a known-brand but unusual lager for your less adventurous visitors, or the non-aficionado friends and other halves.

But what about venues where craft beer isn’t the main or only offering, such as restaurants, cafés or ‘regular’ pubs. The constant chasing after fashion and novelty is a never-ending game. Constant novelty, but it’s a business model that’s tough to scale and make reliable. Even those brewers famed for their frequent special releases usually try to build up a solid baseline of regular beers as well, just like craft bars needs that regular tap for those customers who ‘just want a beer’. 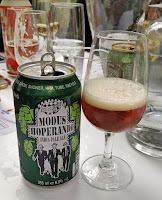 I arrived late at this month’s Imbibe Live trade show at Olympia, but just in time to catch Mitch Adams’ final talk and tasting, “Back to the Future”. In it, he encouraged retailers in particular to forget modern beer trends and fashions for a moment, and instead pay attention to some of the beers – and perhaps more significantly, beer styles – that have dropped off the headlines, but still deserve some love.

In particular, he highlighted Helles & Vienna (golden & amber) Lagers, Hefeweizen, Golden Ale, West Coast IPA, and Tripel. I might quibble with one or two of his exemplars – Stiegl Gold isn’t my favourite Helles, I’m afraid – but others were excellent choices. Erdinger Weisse for instance, and Ska’s Modus Hoperandi for classic American IPA, while I'd say Brooklyn Lager is the best Vienna Lager in volume production.

He’s got a very good point here, although as implied earlier I have no fears for lager. We’re seeing more and more craft lagers – it does seem to be lager that most ‘just-a-beer’ drinkers go for. So you make your craft lager a bit more malty and flavoursome than the big brands, easy drinking but nothing too scary, nothing too different…

The crafty (re)birth of lager

Even in Germany, where the craft beer movement grew up in large part in opposition to the industrialisation of beer, you can see this happening. German industrial Pils is yellow, fizzy, light-bodied and remarkably samey. Craft beer therefore set out to be the opposite – it’s at least hazy if not downright murky, amber-brown or even darker, malty, and comparatively heavy with aroma and flavour.

While that trend’s not gone away, more and more modern microbrewers are now producing a Pils or a Helles too. It’s partly that they have customers who want novelty, but familiar novelty, and partly the realisation that making a really good lager is hard. So if you want to show your skills as a brewer, it’s one way to do it.

But while offering a regular craft lager for the ‘just-a-beer’ customers works for the specialist beer venue, what about the reverse – a ‘regular’ catering for aficionados? Maybe it should be a guest Vienna, or a blond lager and a West Coast IPA. And it can’t hurt to have bottles of a reliable Weizen and Tripel (or Dubbel) in the fridge.

What do you think – are we worrying too much? Does this happen already? Or is there still too much focus on fashion?
at 5:00 pm No comments: