German Pale Ale: when a beer is defined not by what it is, but by what it's not

Just recently I’ve has a few German pale ales and amber ales, and noticed something common to them all – a yeasty roughness on the palate, and sometimes on the nose too. The malty body is still there, along with fruity modern-style hops, but overall it’s nothing like the clean brew you’d expect in the US, or in most other countries with a US-influenced ‘craft beer revolution’ underway.

It set me thinking. What are the fundamental things setting a well-made pale ale apart from a lager? There may be fruity esters from the warmer ale fermentation, say, but they can be minimised. The existence of Kölsch – which to the uninitiated might appear to be a pale hoppy lager, but some which beer geeks insist on calling a pale ale – shows how close the two can be, as do several British ‘lagers’ that are actually warm-fermented, such as Fuller’s Frontier.

In the opposite direction, so too do the snobbish descriptions I’ve read online of Eichbaum’s clean and smooth Steam Brew Session IPA as “lagery”. Then what’s going on with these rough-edged and yeasty brews?

Then it struck me: it’s most likely a legacy from the early days of German ‘craft beer’, when the most important thing seemed to be to differentiate yourself from the industrial Pils producers. So if their beer was golden, hoppy and as bright as a new pin, yours needed to be murky amber and tasting of yeast.

I had hoped it would have changed by now. After all, what inspired many new-wave brewers in Germany and around the world were the big flavours and aromas of golden-bright Sierra Nevada Pale Ale and its ilk. The opportunity is still there to create great Pale Ales, and differentiate or localise them by using all-German ingredients.

It’d be a huge shame if, instead of capitalising on the broader palette of aromas and flavours available to them, it turns out many German brewers – and drinkers – still prefer to lazily define German Pale Ale as “Hey look, it’s definitely not Pils!”
What's your experience - have you found a great German Pale Ale? Do you like the yeasty-rough edge, and am I missing something here?
at 8:20 pm 3 comments:

What’s the best city for beer?

It’s one of those questions that's really hard to answer. I mean, first of all you have to set parameters – what terms do you judge “best” by? And what do you mean by “beer” – craft beer, or anything from industrial lager onwards? On top of that, how reliable is your data to start with?

But in the quest for a headline – and to incidentally promote its other activities – the Money.co.uk website has given it a go. Working on the three measures of price, brewery density and bar density, it lists the top three as Asheville (in North Carolina), Prague and Krakow, with major craft beer destinations such as Denver, San Francisco and yes, London, way down the list.

Top 10 Best Cities in the World for Beer Drinkers

What they’ve done is to take brewery numbers from Ratebeer, venue counts from TripAdvisor, and the average price per pint from cost-of-living tracking site Numbeo.

Those who know the US scene will not be surprised by presence there of Asheville, a party-town full of small breweries, nor I suspect by Fort Collins, where 20+ craft brewers, most notably New Belgium and Odell, have grown in the shadow of a massive Budweiser factory. Prague and Krakow, on the other hand, benefit more from low beer prices and thriving nightlife.

Pricing – or rather the extortionate rate of beer tax in the UK – is a big part of what pushes London to an absurd 39th out of 40. And that’s despite London having more than twice as many breweries as any other city on the list, and being second only to Tokyo in its number of venues. Well, that and the fact that Money’s analyst has normalised by population, which drops sprawling London down below even Antwerp and Anchorage on "Breweries per 10,000 people".

Re-sorting the full list of 40 cities it’s interesting to see other effects apparently at work. For example, craft beer meccas such as Portland Oregon, San Diego and Denver report beer prices around $6 a pint, while in the likes of Kansas City and Milwaukee it’s nearer $4.

Is that because more people in the latter two drink cheaper macro, or because they’re less fashionable and wealthy areas, so prices are lower? I don’t know – although a quick look at Numbeo suggests that its data may not be the most reliable as it merely quotes average prices for “domestic” and “imported” beers. This is a crappy old Americanism from the days when the typical menu choice was Bud/Miller/Coors for Joe Regular, and Heineken or Amstel for Joe Posh.

It’s all a bit of fun though, and it certainly generates a few ideas for places to visit, as well as a picture of what you can expect to be charged in different countries around the world. Just don't take Money's promotion of debit cards as gospel – cash remains king in many places, including Germany where pre-pandemic habits are reasserting themselves.

Let's rephrase it them: what’s your favourite city for beers, and why?

After 18 months of not-a-lot, and 10 days after the absurdity of "Freedom Day", it felt weird but so good to be back at a beer festival, chatting with brewers and fellow beer fans. The oddness started of course with the trek across London to Canada Water - my first tube journey in 18 months, too, and the city still strangely quiet which somehow I'm not used to, as my local area has been pretty busy for months now.

Then the long-ish queue to get in, still reasonably distanced while we all waited to have our Covid passes checked, and finally into the cavernous halls of The Printworks... Again, it really was not busy - partly by design, as the organisers were determined to avoid crowding and said they'd gone for just half the theoretical maximum capacity, and partly because it was so early in the first trade session that some bars hadn't quite finished setting up yet.

Anyhow, I'm typically rubbish at taking photos, often only remembering once it's too late, so this time I decided to get it done while it was quiet. The early start gave a better view, even if it also meant a slight absence of atmosphere! Here's a few samples... 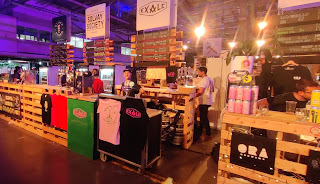 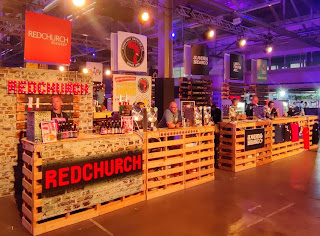 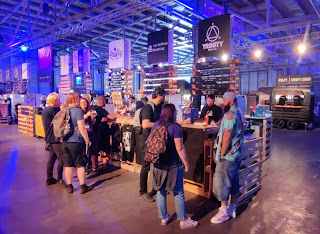 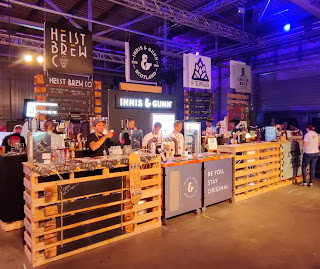 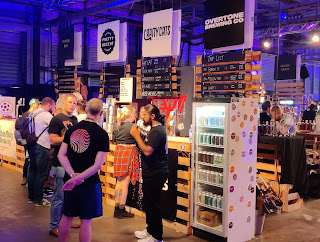 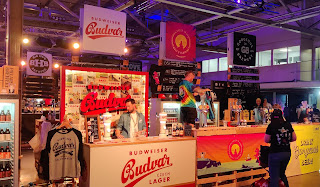 Needless to say, it got quite a bit busier as the day progressed - though never crowded or full, not even during the early stages of the evening public session - and there's quite a bit more to write about.