Under lockdown, maybe we can travel by beer instead?

I had hoped to be trying out the latest addition to London's beer tourism this weekend: the Blackhorse Beer Mile in Tottenham, which takes the walker to the Exale, Wild Card and Signature breweries, and also the Truman’s Social Club which I understand is the new Truman’s brewery tap. Sadly, the inept B Johnscum and his corrupt crew of venal dullards and sociopathic idiots put paid to that.

Thankfully though, I can still enjoy a little bit of canned Tottenham at home, courtesy of the afore-mentioned Signature Brew. Despite the pandemic, their musically-inclined brewers have been churning out new brews this summer and autumn, as well as their core beers. 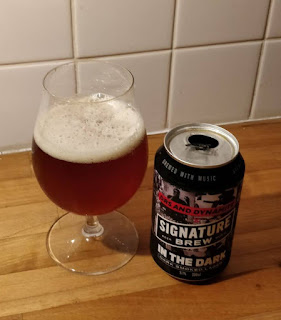 What caught my interest in particular was that they had done a couple of Bavarian classics. Now maybe it’s my imagination, or maybe it’s the brewers’ lockdown restlessness, but I get the sense there’s a bit of international beer style sharing going on. For instance, via Untappd I’ve seen quite a few German micros and brewpubs doing red ales for autumn, while some of the UK brewers have been working on classic German styles in return.

The two they kindly sent samples of were In The Dark, a 5.1% Bamberg-inspired Rauchbier, and Luftballon, a 5.5% Helles Festbier, usefully labelled with the warning, “Please do not drink 99 of them.”

So, how do they stack up to their prototypes? In The Dark has all the right pieces – beech smoke, burnt toffee notes, some dry bitterness – but somehow they don’t quite fit together. I suspect it’s just a bit too light-bodied – all the Franconian Rauchbiers I can think of are maltier than this, and most are at least 5.4%. Even my mug a few weeks ago of Spezial’s Rauchbier Lager (4.9%) had a bit more body than this. 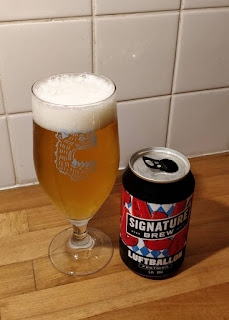 On the other hand, for all that Nena is from North-Rhine Westphalia rather than Munich, Luftballon is bang in the landing zone. Sweetish and lightly bready, with a dry-grassy hoppy bitterness, it’s a little chewy like its Bavarian brethren. Essentially it does exactly what a Festbier sets out to do, which is to take a Munich Helles and wind it up to 10. (One day they’ll get it to 11, but not yet!)

While I’m here, I should also mention some other Signature specials. C-Sharp is one of the modern breed of fruited sours, which is to say they’re not actually very sour – in fact, most of them are out-tarted by the macro-brewed Berliner Kindl Weisse you can buy in most German supermarkets.

C-Sharp’s differentiating point is lemon, not just from Citra hops but also from Sicilian lemons. It puts me in mind of both Limoncello and the Limoncello beers I’ve tried – despite the lemon juice aromas, C-Sharp is more lemon-and-lime tangy than tart, and fairly sticky-sweet too. It's intriguing, but I think I’d prefer it a bit more beery – if I had another can I’d try blending it with a West Coast IPA or somesuch. 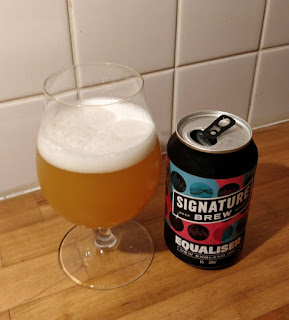 The next is Equaliser, whose gimmick is to take a hazy New England IPA and transpose it to the Antipodes, substituting Australian and New Zealand hops for the usual American varieties. And by gum(tree), it works really well. Notes of white grapes, orange and lychee, smooth and juicy, and with a firm bitter kick – very nice.

And then there's this year's brew of Signature Festival Saison – clean and dry-sweet, lightly funky and fruity, with hints of pepper and St Clements. Quite delicious! So, no black horses but three palpable hits and a couple of near-misses. That'll do for now. Cheers...