The only drawback is it's in the rural English Midlands, in December...

A press release arrived today, announcing Worcestershire pub creates pop-up drunk tanks to curb xmas drink-driving. It says the landlady of the Drum and Monkey, Newbridge Green had the idea while talking to one of her regulars, a chap who runs a camping equipment business.

The press release - issued by his PR company rather than hers - says he "immediately offered a range of camping gear including several large tents, three-season sleeping bags, nightlights and a toilet tent" to be put in the pub garden (see left, in warmer times) from December to New Year's Day.

The landlady, Liz Jennings, says that anyone over the limit at the time of leaving the pub will be offered a free sleeping place. "There was so much interest in paid-for drunk tanks earlier this year and I thought it was a good idea," she's quoted as saying. "But I wanted to offer my customers a free facility as it’s the season of goodwill. I’ll even be offering my overnight guests a mug of hot tea and a bacon butty the next morning before sending them on their way."

It looks like a bargain to me - get trolleyed on good real ale at a pretty country pub, free crash space for the night and free breakfast! The downside is night-time temperatures around freezing. Plus, if you're that far over the limit at closing time, you could still be over the limit after breakfast. Best stay on a bit longer, then. Oh, hang on - you're in a pub. Hmm, I wonder if she takes weekly bookings...?

Email ThisBlogThis!Share to TwitterShare to FacebookShare to Pinterest
Labels: winter

An ale that repeats a name from a different ale two years ago, and is also brewed on two different continents to different recipes. Confused? Once upon a time maybe you wouldn't have been – the versions would have been too far apart in time and space. But with the advent of the Web, all that has changed.

A few months ago, several US brewers travelled to visit UK breweries at the invitation of the JD Wetherspoon pub group. They were here to brew versions of their ales that would be cask-conditioned and sold exclusively in JDWs, nominally for its real ale festival. So far, so good – and indeed, some of the resulting beers were very good.

But it also resulted in a discussion on Untappd last night: the site had acquired three listings for what, at first glance, appeared to be the same beer: Stone's Supremely Self-Conscious Ale, which appeared in the most recent JDW festival as Stone Supremely Self-Conscious Black Ale, brewed at Adnams in Suffolk. All three listings included mentions of Wetherspoons – so what was going on? 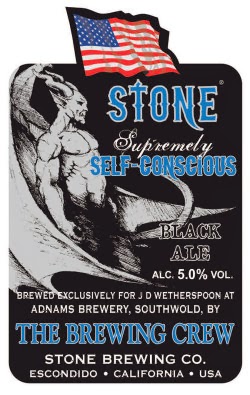 It took a bit of Web digging, plus a hunt through the 'archives' on Ratebeer and BeerAdvocate, to come up with an explanation. Along the way I found an entry on Stone brewer Mitch Steele's blog where he described his trip to Adnams and the fact that the Black Ale is a variation on a SSCA, which was a Black IPA brewed at Stone's Liberty Station 10-barrel brewpub, initially at least from the second runnings of its Sublimely Self-Righteous Ale.

(There's an interesting thing in itself – it's been a while since I heard of a separate ale being made from second runnings. It makes sense though because Sublimely is a bit of a monster – 8.7%, so it needs the highly concentrated wort that comes off the mashed malt first, otherwise you'd be boiling it for days to get the sugars concentrated enough. And there's bound to be lots of sugars left in the malt after that first wash.)

Here's what I think happened: in 2011, Stone released a 3.5% dry-hopped Black Mild (nowt wrong with that – 'mild' means un-aged, not un-hoppy, and milds can be light or dark), this was around for a short while and got listed on all three of the beery sites mentioned above. 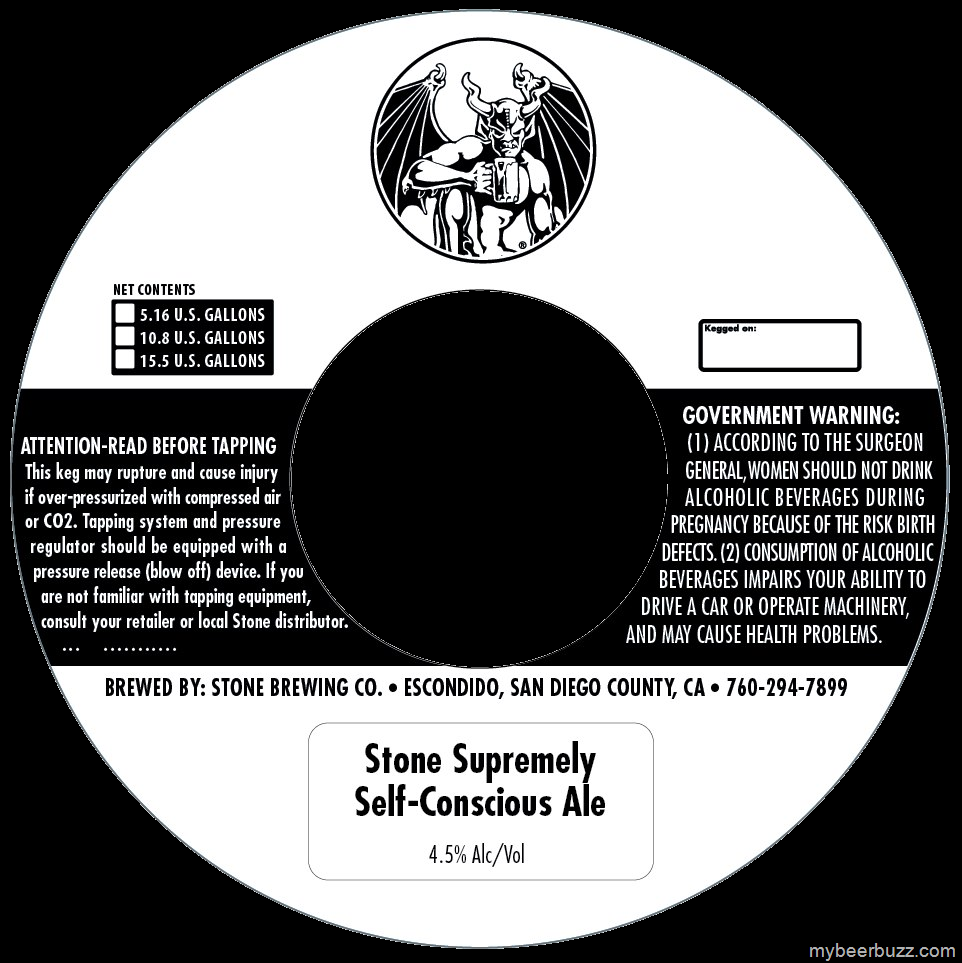 Then in 2013, it revived the name for a 4.5% Black IPA – here's the keg label – which was brewed twice (says Mitch Steele) and was also served at this year's Great American Beer Festival and at several Stone events. This too got picked up by the beer listers, all of whom seem to have rather carelessly (given the different ABV & style) assumed they were drinking the 2011 beer. The Ratebeer entry comes out weirdest – three-quarters of the rates are the BIPA, but it's still listed as a 3.5% mild; the Untappd one had its description and ABV adjusted earlier this year, the latter from 3.5% to 5.2%.

Why 5.2%? I don't know, but by the look of it the ABV changed from 4.5% to 5.2% - probably the former was the pilot brew from second runnings and the latter was the commercial brew at Liberty Station.If anyone from Stone is reading this, could they comment please?

Then there's the UK 're-creation', which was made at a different brewery, uses different yeast (Adnams) and a different hop bill, has a different ABV (5%), was cask-conditioned, and has a different name on the pumpclip – SSC Black Ale, rather than SSC Ale. Yet there's a bunch of Wetherspoon listings bundled in with the US version on Untappd, presumably by drinkers who didn't get past reading 'Supremely Self' before they went “Yeah, whatever.”

And then there's a couple of listings for something called Sublimely Self-Conscious Ale. I can't find this name anywhere apart from Untappd, and I will be astonished if it's not either a conflation or typo, especially as Supremely Self-Conscious's parent was Sublimely Self-Righteous. As they used to say on TV, “Confused? You soon will be.”

It was over to Egham this afternoon for the 16th Egham Beer Festival - there's three a year, so it's not quite as old an event as that makes it sound! I'd been to there before, although not for a few years, so I kind of knew what to expect: half a dozen real ales on handpump inside, and several more on a gravity stillage in the yard outside.

It was even more impressive than I remember, though - more like a dozen handpumps inside, and more handpumps outside, as well as several casks on gravity. The beer list was really interesting too, with lots from new breweries, especially around the London area.

(When we left London last summer, there were 20-25 breweries in the area, up from just two or three not so many years ago. When we came back to London this autumn, it's nudging 50-odd breweries. Maybe we should go away again - we might be able to get it over 100!)

The festivals take place at the Egham United Services Club, which is open to CAMRA members and guests as well as to club members. It's a great venue and very supportive of the event. Indeed, as the festival organiser noted, with that many handpumps it's pretty much a permanent beer festival...

It's also a very friendly venue, and as a members' club it is not just open to families but actively welcomes them. À propos of which, I know this blog has been a tad quiet of late, well here's why: this is the youngest attendee at the festival, aged just over a week, so as you might guess I've been a bit distracted of late. And yes, she and her elder brother were very well behaved and didn't annoy anyone, in fact she slept through the whole thing.

As to the beers, there were two or three standouts, only partly defined by how well they cut through the foul cold that has me sneezing and sniffling all over the place. I was especially impressed by Black & White IPA, which is the latest London Brewers Alliance special, a black IPA brewed at By The Horns, and then by two beers from Kent Brewery, which I don't remember meeting before despite it being three years old.

The first of these was Elderflower Saison, a beautifully complex, crisp and floral Belgian-style pale ale. The second was Dead of Night, a variation on Kent's highly regarded 5.5% porter that includes cherries - the result is dry, herby and ashy-bitter, with a noticeable red fruit tang.

But perhaps the most impressive of the lot was Plateau, a pale ale from a brand new - as in, so new they only started brewing about six weeks ago - Sussex brewery called Burning Sky. Just 3.5% ABV, Plateau features a mix of American and New Zealand hops for a spicy and tropical fruit character, and is immensely refreshing and satisfying, drinking considerably above its strength, if you know what I mean.
at 10:30 pm 3 comments: