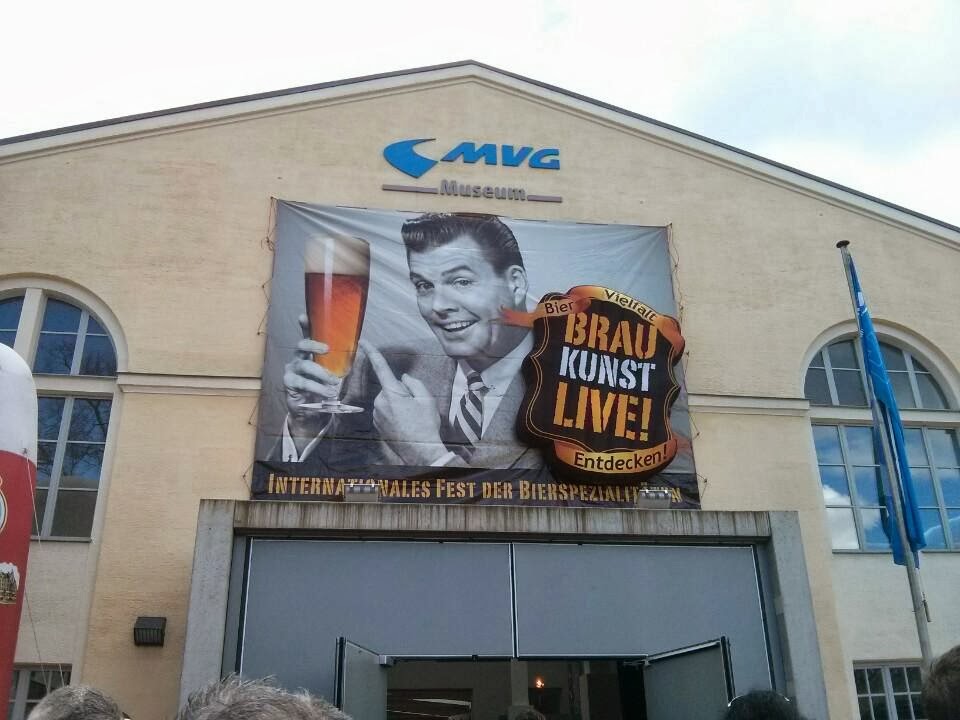 Well, here's to that! The two big take-aways from Braukunst Live! for me were just how much real curiosity there is now about interesting beer in the legendarily conservative state of Bavaria, and how many of the traditional brewers are dabbling in 'new craft' alongside their regular lines. Yes, some are obviously finding it hard not to be cautious, but others are applying their years of brewing experience rather well – a solid dry stout from Austria's Schlossbräu, the aforementioned Au Grätzer, and Schneider's Tap X Porter Weisse all spring to mind.
at 10:00 am No comments:

﻿140 years on, Batemans rebrands as “Craft with heritage”

Batemans is one of those breweries I'm aware of as an old family firm, producing good quality ales in traditional English styles, with the occasional collaboration or other surprise. I don't pigeonhole it with the new craft micros though, so I was intrigued when I got an invitation to their 140th birthday party and the launch of what looked to be a crafty new branding.

It turns out there has been a lot more going on in Wainfleet than I'd realised: as well as all their seasonals and specials (Rosey Nosey is a favourite of mine), there's now a series of English Strong Ales infused with coffee, chocolate, Amaretto and such like, sold under the new Bohemian Brews brand, and another series constructed to taste like biscuits – the example at the launch was the Chocolate Biscuit Beer winter seasonal, and if like many people you think this beer tastes like chocolate digestives, well that's exactly what it's meant to do.

Even odder is the Black Pepper Ale, which isn't actually brewed with pepper, instead you get a bottle of ale (a 5.1% version of XXXB, I understand) plus a Batemans-branded sachet of pepper with instructions on how to add it. Then there's English BBock, Batemans' top-fermented interpretation of the North German (not just Bavarian!) classic, and so on...

The brewery has made other, more subtle, changes too. A big one is adding storage capacity so they can extend the ale maturation period from five to nine days. Stuart Bateman explained that the idea is to ensure drinkers don't get 'green' beer that isn't properly ready yet: “Our beer drops bright very quickly, but we don't want licensees selling it just because it's bright,” he said. “Not everyone will cellar-condition for four, five or six days now – if I was running my own pub I'd do it for 10 days! – so we have taken it on for them.”

Introducing the new beers – there's also Black & White, which is an uprated 3.6% version of the former 3% Dark Mild – Stuart was keen to stress how much Batemans is already doing in terms of variety and innovation. Having been quite surprised when I saw just how many beers it has listed on Ratebeer and Untappd (at least seventy!), I'm inclined to agree.

“We want to prove you can be a craft brewer with tradition, with heritage since 1874,” he declared, in a direct reference to one of the problems the 'craft beer movement' has here, i.e. that while the term makes sense in America, where 'craft' pretty much equals 'innovative and new', in Europe we still have plenty of brewers who fit all the dictionary definitions of 'craft', yet are centuries-old.

He added that Batemans last rebranded in 1979, so it's not like they've rushed into it, and that it's all been done in-house – or perhaps I should say in-windmill, since the iconic mill is still there, albeit in a cleaner, more stylish form.

“The days of just brewing fairly standard pale ale style beers, all fairly similar in flavour, but with slight colour variations, called ‘funny’ names and often with ‘funny’ pictures on the pump clips, bearing little relevance to the beer style or flavour, are gone,” he continued. “We want our customers to see our new branding and know exactly what we stand for as brewers – craft brewers since 1874 – and from the beer names and pump clips, to know exactly what the flavour characteristics of any of our beers are: 'it does what it says on the tin'.”

So what are the beers like? To some they might seem well OTT – the Orange Barley beer smells rather like Fanta and tastes like a mix of Fanta and a fine and spicy Rye beer, you can taste the hazelnuts and chocolate in the Hazelnut Brownie beer, and the Amaretto Mocha beer is full of almond and coffee. Yet they all seem to work, and achieve a pretty decent level of integration. Sure, for some people a 330ml bottle will be plenty, but others are already happy to drink them in pints – and it turns out that black pepper is an intriguing match for XXXB.

Not too surprisingly, Stuart energetically denied that they are in any way gimmicks. He cited the awards they've already won – first prizes in both the 2013 Sainsbury's Beer Hunt for Batemans Mocha, and in the 2014 one for BBock, a win for cask Hazelnut Brownie in the JD Wetherspoon Autumn Beer Festival, and now first place for cask Mocha Amaretto at the CAMRA Manchester Beer Festival. He pointed out too that if you are trying to get new people interested in beer – which he is – then you need to allow for a certain sweetness of palate. And it has to be said that on the evidence of the quite excellent XXXB on cask at the party, and of other excellent cask and bottled beers such as the Salem Porter and Dark Lord, there is no sign that the new stuff will detract in any way from Batemans commitment to fine traditional ales.

So, I wish a very happy 140th birthday to Batemans – thank you for all the great beers, and I look forward to drinking plenty more!