How many 'styles' can one beer have - and what is Amber Ale anyhow?

Beer styles are a perennial topic for discussion among beer geeks - sorry, I mean 'aficionados'! I was in just such a debate last week, discussing whether a particular brew should be classed as Bitter, Pale Ale or Golden Ale.

Over on sites such as Ratebeer and Untappd, and among the BCJP beer judges, it's even worse - does this particular Amber/Red Ale meet the specs for Irish Red or would it be better listed as American Amber? Is this Pale Ale - English, Pale Ale - American or Pale Ale - International? And how do we differentiate between Lager - Strong and Bock - Helles?

So when the news came through that Asahi has refreshed* the branding for Fuller's London Pride I was struck not so much by the new imagery - very nice though it is, with an impressively subtle combination of modernity and continuity of tradition - but by the fascinating image they published alongside the news, showing how Pride's branding has changed over time.

The name's unchanged of course, and the griffin is always there, but just look at how the description changes!

So one beer has at various times in its history been Best Bitter, Pale Ale, Premium Ale, whatever that is, and today it's Amber Ale. OK, so now tell me what you reckon the difference is between Bitter and Pale Ale? 🤔

It also confirms something I've been saying for a while now: Amber Ale is just another word for Bitter. (And yes, American Amber Ale is just American Bitter!)
It's the same thing that happened with Mild. Marketing types decided that Mild was no longer an attractive word to use, that it didn't describe the beer accurately (and to be fair, they're right - Mild originally meant un-aged, not Mild in flavour) and that it put consumers off. So they renamed it Dark Ale - I'm guessing the marketeers were probably lager drinkers, so weren't aware of pale Milds...
Now it's the turn of Bitter. In recent years more and more brown bitters have been renamed Amber Ale, or in some cases Ruby Ale (although we are crossing into Brown Ale territory here, as well).

Let me say it again then:

Amber Ale is just Bitter under a new name.

Dark Ale is just Mild under a new name.

Oh, and historically at least, Bitter was synonymous with Pale Ale - and by the look of it, for many brewers it still is. Or am I wrong?? 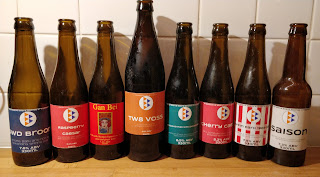