One of the great things about beer and brewing is that there’s always something more to learn, and rarely is that more true than of the fast-evolving non-alcoholic and low alcohol – NoLo, or sometimes LNA – segment.

I’ve written a couple of times before about the improving quality of British low-alcohol beer and the ensuing NoLo sales growth but only touched lightly on how they’re made. How did we get from the thin and slightly soapy de-alcoholised lagers of yesteryear to a world where we have enjoyable non-alc IPAs and Porters?

And sure enough, the production of modern NoLo beers turns out to be a fascinating business, on a par almost with the companies chasing synthetic meat or dairy-free vegan cheese. On the one hand, in beer, meat and cheese, we humans have discovered things that are delicious and relatively easy to produce.

But on the other, we’ve come to recognize they have major flaws. While nourishing and tasty, they can also contribute to poor health, and both meat and dairy production can be environmentally destructive, whether in terms of degraded grazing land or the greenhouse gases that animals emit.

Thankfully beer does not suffer so much on the latter score. Yes, it requires lots of energy to boil and mash, but that can be renewable for instance. And breweries are much better now at reducing their water usage, although even the most efficient still consume two or three pints of clean water for every pint of beer. 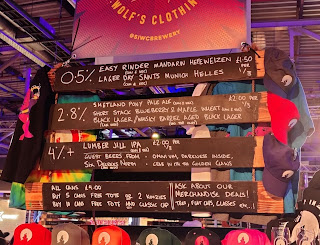 NoLo brewers have often been a bit cagey on their processes though, referring only to “special yeasts” and the like. So it was great to get deeper into the topics earlier this year with John, a haematology doc by day and one of the self-proclaimed ‘mad scientists’ behind new brewery Sheep in Wolf’s Clothing by night.

“It’s hard to grow organisms that don’t eat sugar, to brew beers that don’t taste like either hopped water or wort,” he said, when we met at this year's Brew//LDN. “We’ve been isolating yeast from for example Kombucha [fermented tea] and the National Collection of Yeast Cultures. You want a yeast that doesn’t eat maltose but will eat glucose, then you adjust the wort to be drier. 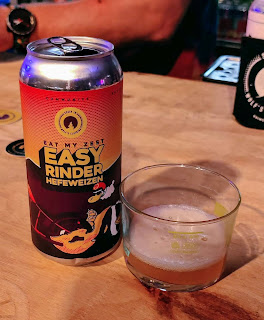 “You want it to work slowly, producing esters and other flavour compounds. Fermentation is what makes beer taste like beer, but you want it to ferment with the least alcohol and the most flavour.” It certainly worked well for their zesty and light 0.5% Easy Rinder citrus hefeweizen, made with real mandarin orange rind.

John added though that’s it’s not all about 0.5%ers: “2.8% is still important – that’s the tax break*. We have three beers there.” I tried a couple of these, I wasn’t taken by the Short Stack blueberry wheat beer, but the whisky barrel-aged Black Lager was very good, starting light, with classic Schwarzbier notes of coffee and ash, then filling out as the whisky comes through. (They blend back with fresh beer, of course, to keep it at 2.8% despite the whisky.)

And he said it’s easier to make gluten-free beers if they’re non-alc, too, because the grist – the amount of malt used – is smaller. “They’re already down to 30ppm of gluten so there’s less to take out.” Like many brewers, they then use enzymes – Brewer’s Clarex – to take out as much as possible of the remainder.

If there’s a downside, said John, it’s pricing. Sure, the alcohol duty is lower, “but the ingredients are the same whether you brew to 5% or 0.5%.”

*UK beer duty is approximately halved for low-strength brews (between 1.2% and 2.8% alcohol - under 1.2% there's no duty payable) and increased for beers over 7.5%.