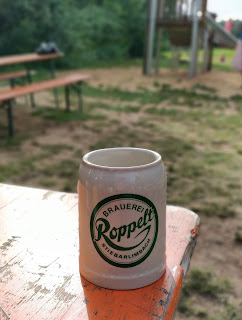 It wasn’t until late on our last evening in town when I finally made it to the St. GeorgenBräu Keller. I’ve had a few of their beers before – the brewery is fairly substantial and its bottled beers are fairly widely distributed. They even can their Kellerbier now! It feels more planned and organised than most other Bierkellers I've been to, and perhaps just a little less characterful – there’s a proper bar, and the terraces are even and straight. But whatever – there’s excellent Kellerbier and Helles on tap, plenty of room, and the sunset view across the town is gorgeous.
at 9:09 am 2 comments: