Given that GBBF moved to Earls Court a few years ago because it had out-grown Olympia, some people were nonplussed by the move back this year. OK, it was forced this year by Earls Court being used for some sports fest, but the question was how would it cope? 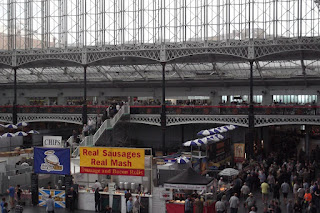 Extremely well, is the answer! Olympia's Grand Hall has been expanded in the intervening years, so the exhibition floor now extends quite a long way beyond the south-western end of the arched roof. Here's a pic showing what I mean - there, past the balcony of the main hall, you can see not one, but two new floor spaces.

Both these spaces are in use - most notably the Bieres Sans Frontieres foreign beer bar has been split in three, with the German & Czech beers given a generous space of their own upstairs (although as I noted elsewhere, this might more accurately be called the Bavarian & Budvar Bar, as I could see very little from the rest of Germany (or indeed Czechia) apart from Jever, Früh Kölsch and a couple of Alts).

Also in use is the balcony. Some of it is needed for CAMRA backstage stuff, but more than half is given over to seating for visitors, as is quite a large part of that south-western extension to the hall, on both levels - this pic shows the upstairs area. One of the perennial complaints about GBBF at Olympia in the old days was the (perceived) shortage of tables; no-one can honestly try that one this week.

There's some cracking ales around, too. Give me Olympia and proper beer, rather than the Olympics and boring Dutch fizz, any day...
at 2:22 pm