﻿A hoppy weekend in Lower Saxony 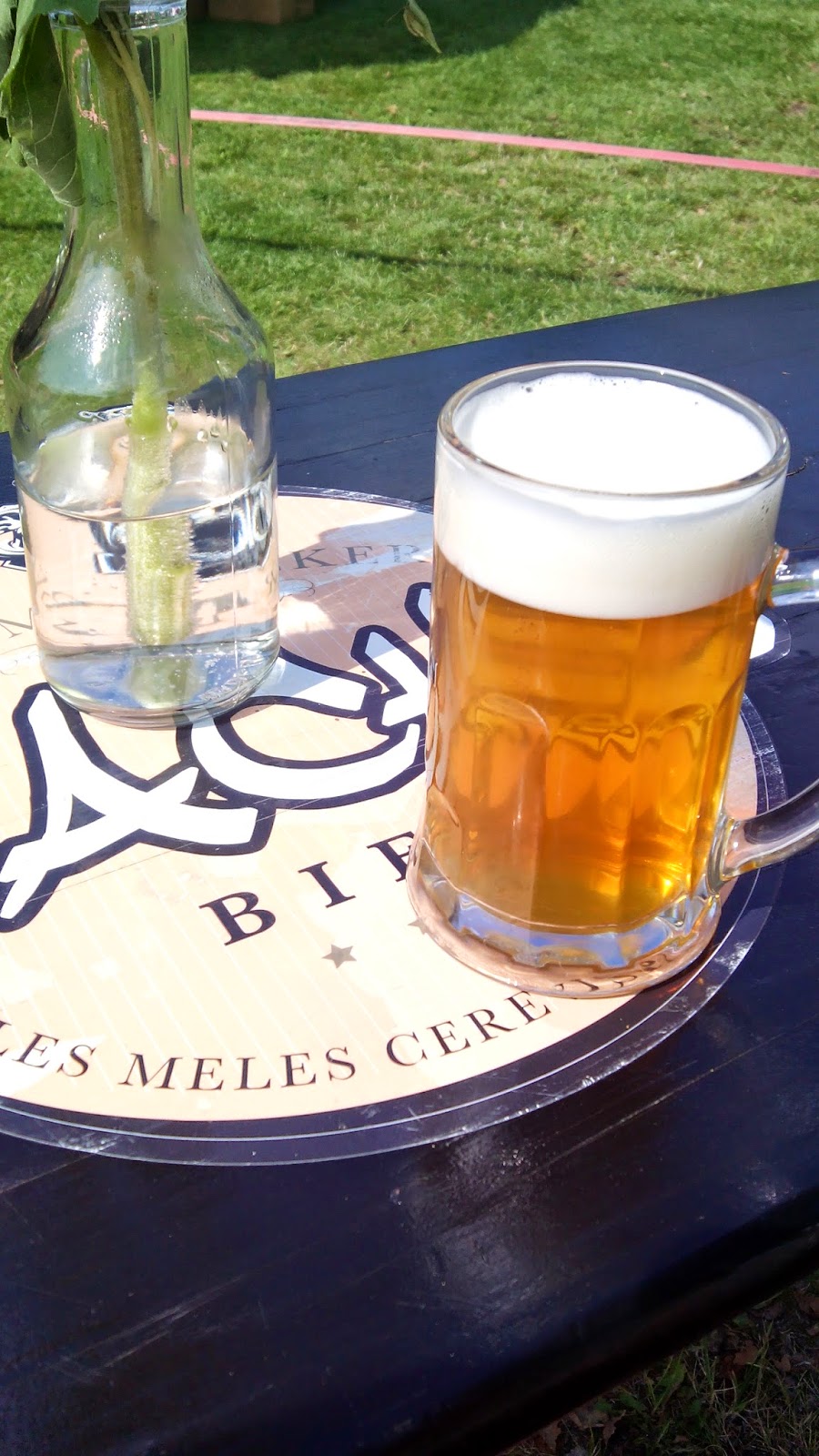 We're in Germany on holiday, and last week I spotted an article in the local free newspaper* mentioning that nearby microbrewery Sommerbecker Dachs was having a family-friendly** summer festival for its fifth birthday. So on Saturday afternoon we headed out of town to the tiny village of Sommerbeck.

When the boy and I walked in, 30 minutes after the nominal 3pm opening time, we could only see two other visitors and the staff were still setting up the tills. He jumped onto the (free) bouncy-castle and I went for a beer.... I hadn't tried the Dachs Pils before – it proved to be a Landbier Pils in the northern style, so slightly hazy with a yeasty note, and with lots of bitterness but very little actual hop flavour. Not really my thing, in other words.

Once the girls arrived and we got a table, things picked up. The boy got his face painted (also free) and played on the slackline/tightropey thing, the baby was passed around and much admired, we were assumed to be local because, well, everyone else was, and my choices of beer improved. The Märzen was darker than the last time I tried it – more orange-brown than gold, with nutty and toffee notes and a touch of orange marmalade, while the Schwatt – their version of a Schwarzbier – was creamier and more Stouty than I remember. 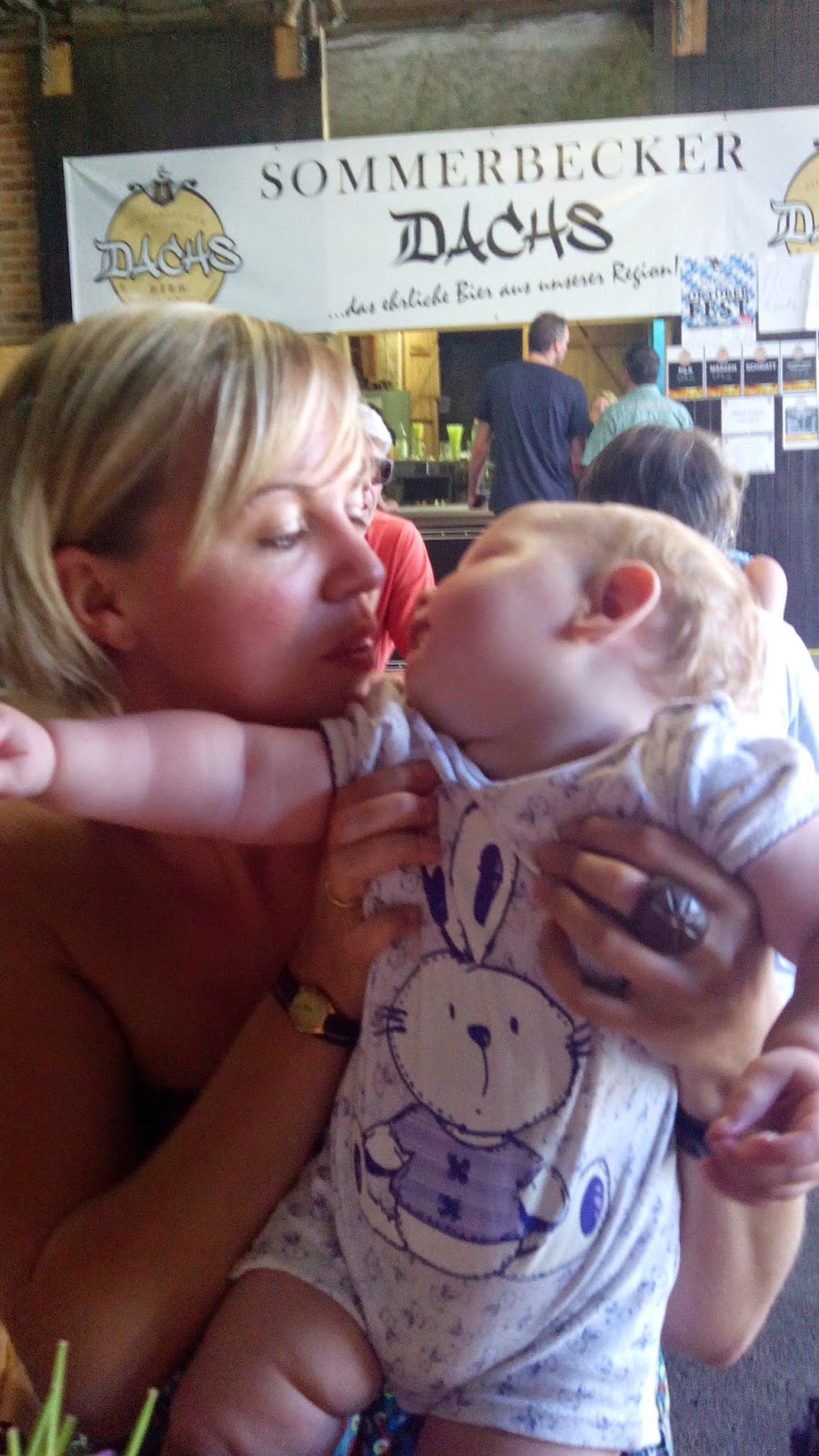 Also interesting was the Hopfenstopfer – basically a hopped-up Helles or Pils that actually tastes and smells of hops, and in particular of hops other than the usual grassy German and Czech types. I think it translates as hop plunger or hop tamper, and to me it signifies that the brewer wants to do something a bit crafty, but doesn't want to "go foreign" with a Pale Ale or IPA. It was a nice example anyhow, with citrus and melon aromas and a spicy, tropical fruit accented body.

Also on tap, slightly unusually for the time of year, was the Dachs Bock. (Dachs – as in Dachshund – means badger, and the brewery mascot is indeed a stuffed badger.) Dark mahogany in colour, it had a malty nose with sultanas and cocoa notes, then a spicy-bitter body with touches of toffee, dried fruit and orange marmalade. Rather like a stronger version of the Märzen, and pretty tasty, hiding its 7.5% ABV well.

Then on Sunday we had planned a visit to Klindworths, easily the best brewpub I've found in northern Germany. Yet it's one that's not much known outside, in part because they don't sell their beer anywhere else – apart from a few beer festivals and parties where you might find their Beer Bus, an old VW camper converted into a mobile two-tap bar.

Things nearly went awry when the rest of the tribe announced that they wanted to go swimming first, but fortunately I remembered there's a Freibad, or open-air swimming pool, almost next door to the pub. So we were lightly sunned and watered by the time we sat down in the beer garden – and started batting away the flies while we waited for our dinner.... 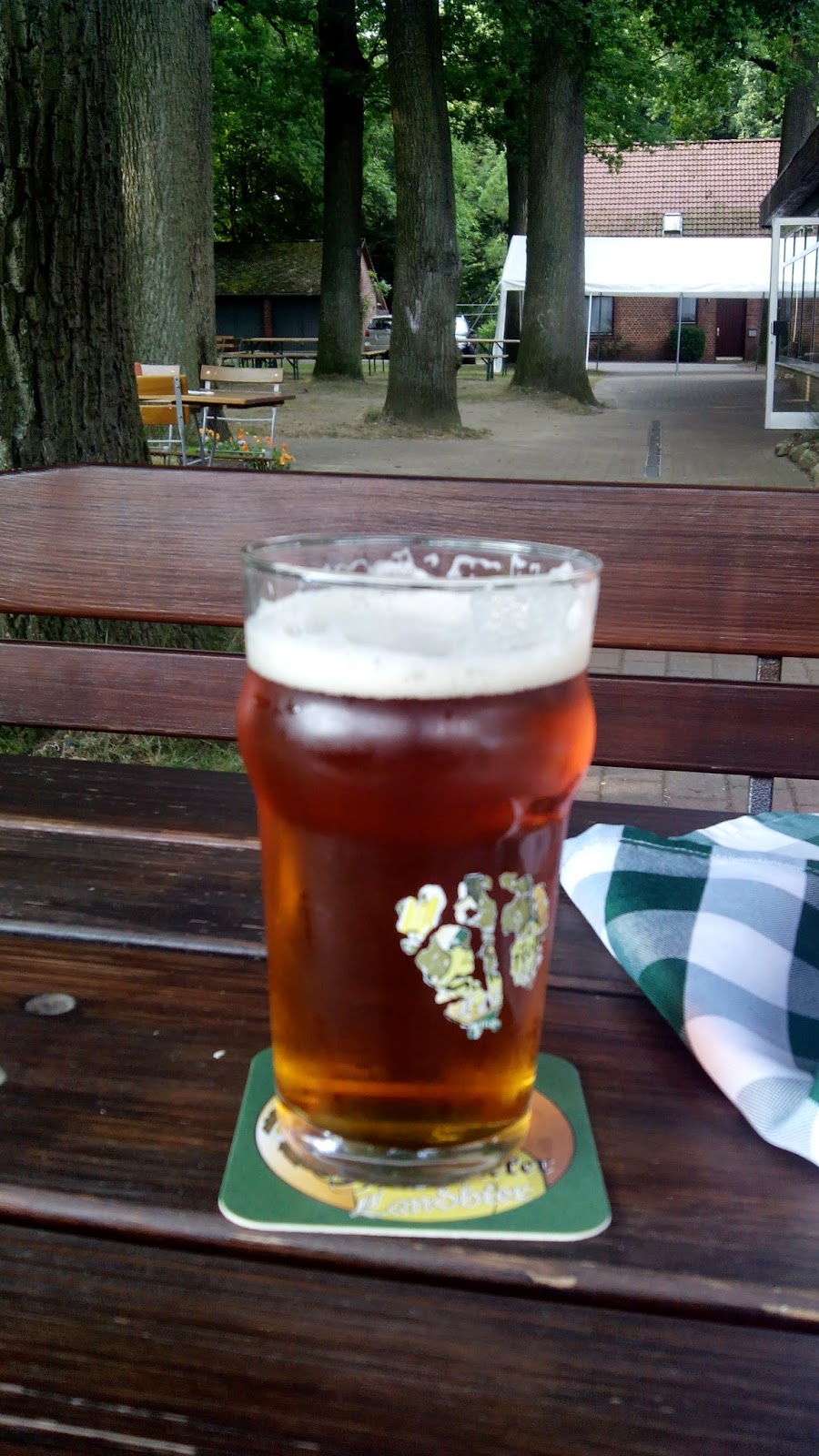 On tap were the Landbier Pils – a far better example of a flavoursome bitter lager than the Dachs one – plus the Weizen, the Keiler German brown bitter, the Pale Ale and the IPA. I went first for the Pale Ale, as I already knew it to be excellent and I thought going for the 6.7% IPA on an empty tummy might not be wise. It did not disappoint – refreshingly dry-bitter, with loads of hops and a malty body. Brewer Niko calls it his interpretation of British Pale Ale; I'd say it is as hoppy as an American Pale Ale, but fuller bodied than the average APA.

Then it was time for the IPA – the only one of his regular or seasonal beers that I'd not tried yet. It's a chunky and thoroughly moreish IPA in the American vein, full of hops and with a warming alcohol bite, yet malty enough to not be overpowering. Even at 6.7%, it's balanced enough to go back for seconds, which I duly did.

Thankfully I wasn't the one driving back – one of the challenges of Klindworths is that it is awkward to get to unless you're already in the area (there's a campsite by the Freibad, and the pub does B&B). There are buses from Buxtehude, but the service is not very frequent and it stops running quite early too. I'd have gone there a lot more often otherwise!


*These still report stuff and are widely read, unlike the UK equivalents which are almost all run now by bread-heads too stupid to realise that if they cut or de-skill all the running costs, ie. journalists, no one reads the result and they lose all the advertising revenue that they're so greedy for.

**One of the things I miss in Britain is that very few beer festivals seem genuinely family-friendly.
at 3:08 pm