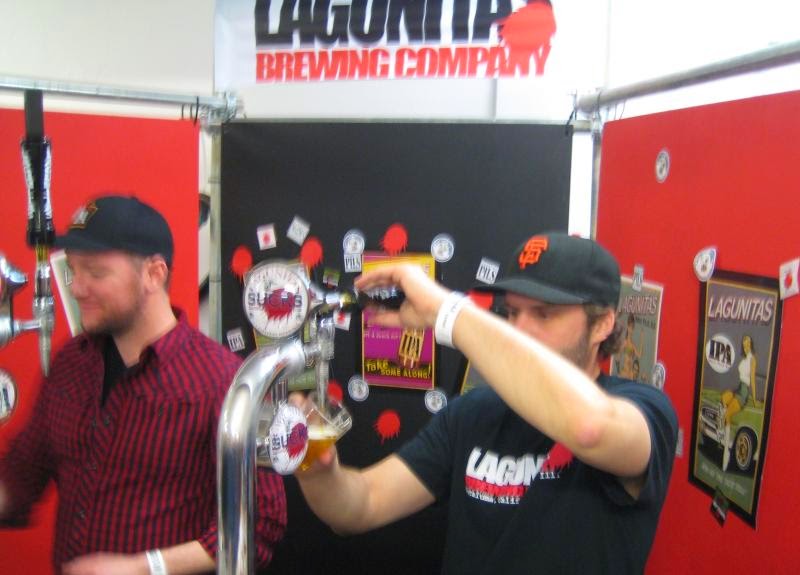 Increasingly, the biggest threat to European breweries trying to emulate American beer styles is the Americans themselves. At CBR, I had a chat with a local rep from one of those breweries, California's Lagunitas, whose eponymous and classic American IPA was hard to find in the UK not long ago, but is now available nationwide via JD Wetherspoon.

“The Wetherspoons exposure is great for us,” said "ales & marketing" rep Ben Caruso, who was busy pouring IPA, Lagunitas Pils and the hoppy 7.85% golden ale Lagunitas Sucks. (The latter was originally a one-off, brewed as a self-deprecating apology one year when the company had to cancel production of its winter seasonal Brown Shugga Ale. Ironically it turned into a bigger hit than the seasonal it apologised for.)

What surprised me was that all the beers were on draught, when the Wetherspoons distribution is all bottled. Apparently Lagunitas has invested in ramping up its keg distribution here, selling on via Adnams – Ben explained that it takes just 12 to 14 days now to bring kegs over in a refrigerated ship, “so they're as fresh here as they are back home.”

He said Lagunitas prices its kegs for the beer to retail at around £5 or £5.50 a pint – intending a reasonable price for a fresh premium import, rather than a rip-off. “You get some American beers selling here at £8 a pint, and that's for beer that isn't even fresh,” he exclaimed.

Initially it's just the IPA on draught here, with IPA, Pils and Sucks imported in bottled form. More kegs will follow though, with Pils probably being the next addition to the UK regular line-up.

Could Lagunitas follow other US brewers in setting up production in Europe? There's nothing planned, but it would certainly be a lot cheaper without all those import taxes, Ben said. He added though that it would have to be their own brewery, because they'd never licence their beers to another brewer.

This is the second in a series of write-ups from London's Craft Beer Rising, which took place on 19th-22nd February 2015 at the Old Truman Brewery on Brick Lane.
at 12:14 pm