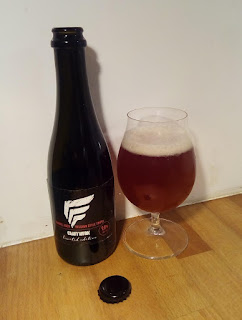 Holy Cowl Belgian-style Tripel is one of those wannabe-crafty German beers that's been on my OK-so-I'm-curious wishlist for a while now. It's from Craftwerk Brewing, which is the crafty arm of Pilsner giant Bitburger Braugruppe. Pretty much every German brewery seems to have a craft beer line these days, often (as in this case) with a hybrid Anglo-German name, and in some cases with its own microbrewery - Craftwerk uses Bitburger's pilot-brewery.

So when I spotted it in one of my supermarket sweeps during our recent trip over, I picked up a bottle - despite it costing twice as much as the average German craft beer, which in turn costs three times what regular beer costs. Not only was it Holy Cowl, it was from the new barrel-aged limited edition of 4500 bottles, now sold-out according the Craftwerk website.

Why did I choose to open it this evening? Well, it was in the beer fridge for one thing, but also I've just come back from Belgium, so it set me thinking about how German brewers so rarely look there for beer ideas. And that in turn set me wondering what it could tell me about the state of German craft(y) beer.

I'm in two minds about Craftwerk Barrel Aged. One the one hand it's so wannabe-crafty it almost hurts. It's German Murky - industrial macro-lager is clear as a bell, so murkiness is an assertion that you're rejecting that. It's a bit too red winey (12 months in French oak barrels, says the website), and I've had several Belgian Tripels lately, and this isn't one of those. And it's been tidied up, in a quality-focused macrobrew sort of way - there's not much sense of handmade here.

On the other hand, it is actually rather tasty. Bitter yet thoroughly fruity, dry-sweet, woody and just the faintest bretty sour note. Perhaps the most interesting thing is that even though it's been tidied-up I don't get the sense that it's also been dumbed down so as not to frighten the horses (or the marketing department), which is what I get from some other crafty operations.
at 11:55 pm