Ale on a train, or getting RATted…

The invitation to take a trip on the Watercress Line’s Real Ale Train – the RAT of the headline – came out of the blue. I know there’s a bit of an overlap between real ale fans and lovers of railways, but every time I’ve come across a beer festival held in association with a heritage rail line, the beer part was literally station-ary. So the idea of the bar being aboard the RAT was intriguing!
It’s over an hour from Clapham Junction to Alton, where the Watercress Line – or to give it it’s proper name, the Mid-Hants Railway – starts. Arriving on Platform 1 on a modern SouthWestTrains sliding door conveyance, we were a bit confused. There were no steam engines or whatever in sight, yet even the SWT platform felt slightly unusual, with its metalwork painted not in modern dark blues but in dark green and cream. Even its ticket office was a – very welcome! – return to the past, with wooden floors and readily accessible, airy and clean loos.

It was clearly SWT-only though and it took a few moments more to work out that we needed to find Platform 3. Sadly this is accessed not by the attractively ancient (and closed) footbridge nearby, but by a shiny modern one further down the platform. Still, coming down the steps the time-shift was complete, with staff in proper uniforms with waistcoats and peaked caps, doors marked “Station Master”, and posters from the 1950s and beyond. No train though, and no tickets* waiting for us – we’re early, thanks to SWT’s hourly-only service from London, so we’re recommended the Railway Arms just up the road, which happens to be the brewery tap of award-winning local brewer Triple fff. Nice pub! 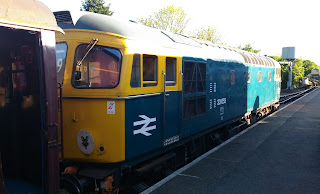 Returning half an hour later, we were introduced to Sue 'the boss', which seemed to mean in reality that she did a bit of pretty much everything! We later saw her helping load the galley, working behind the bar, helping clean the train, etc... Sue explained the RAT schedule: “We make two round trips, though the hot food makes one and a half because it gets off at Alresford,” she laughed. Alresford is the other end of the Watercress Line, some 10 miles away.

10 minutes to departure and the queue for the bar already reached halfway down the next carriage. They're a mixed crew - beer buffs, young couples on a night out, what looked like a 50-something birthday party, and an awful lot of people who looked very familiar from the Railway Arms... 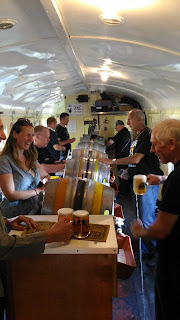 The beer was all bright filtered with no sediment of course, despite being in normal real-ale firkins, otherwise it wouldn't survive the journey. It's why we saw something you'd never see at a CAMRA festival - a barman literally upending a cask to squeeze the last half-pint out. If there is a criticism it's that there's no cooling for the beer on the stillage - which is the bar, of course. In hot weather, as during our trip, the result is occasionally beer that's just a little too warm. Then again, the casks turn over remarkably fast, and the fresh ones are cool from the storeroom. Plus it’s only £2 a pint, with the first pint included in your £15 RAT ticket, so really there’s no complaint!

For many, it’s clearly more of a party on a train. For others it’s a mobile pub, and exploring up towards the loco I even found a folk music jam session underway. As the journey proceeded, and as special trays with holes for the plastic glasses to sit in streamed from the bar – you can also buy your own RAT-engraved glass tankard for a fiver – it did get a bit noisy. But it’s all very good-natured – cheerful voices and the occasional burst of singing. 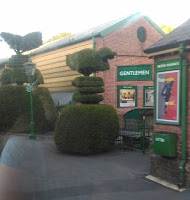 Plus while the light lasted, there’s the beautiful Hampshire scenery, the lovely 'step back in time' stations decorated with flowers, topiary and then, finally, yes – parked steam engines, lots of steam engines! (Our train was hauled by a heritage diesel, but most RATs are steam.) There's also shunters, a crane-train, and lots more.

It being two round-trips, there’s three short loo (and for some, ciggy) breaks at the end-stops while they move the loco to the other end. I noticed some people left halfway through when we were back at Alton – heading back to the pub perhaps.

For those with staying power, the ales continued to turn over – the featured breweries that night were both from Hampshire, namely Longdog and Red Cat, but we’re also treated to a couple of other brews, such as a one-off single-hopped pale ale from Tillingbourne. The food is decent pub grub – chilli, korma, burgers – and while it’s served in take-away boxes, not on china with polished silverware, it’s reasonably priced and the cheerful volunteer staff have more than enough to clear up already!

All in all, it was the best Friday evening we’d spent in a while (the RAT runs a few times a month, on Friday and Saturday evenings). A pub on a train with good beer and constantly changing scenery, what more could you want? And thankfully you’re back at Alton just in time to get the last train up to London – a cooler and quieter journey, but one that is, sadly, rather less fun.

*Do you need a disclaimer? The railway kindly supplied our RAT tickets, but we covered our own transport from London, plus all our food, almost all our beer, and our own babysitter. Phew.

Email ThisBlogThis!Share to TwitterShare to FacebookShare to Pinterest
Labels: railways