I didn’t manage to fit as much into the evening as I’d hoped, partly because the jetlag was catching up and partly because I’d already knocked off the low-hanging fruit. One place I did want to go, because I visited the brewery a dozen years ago and wanted to catch up, was Great Divide. They’re down-town, but fortunately they also have a site now in RiNo where their barrel-ageing and packaging takes place. Of course there’s also a taproom there, and it’s within walking distance of a few more breweries, so that was target number one.

In hindsight, perhaps I didn’t need to walk everywhere. As well as city buses – for a US city, Denver has a very good public transport system – there’s the inevitable Ubers and Lyfts, and a free shuttle looping between the various arty nexuses. Walking gave my brewery crawl a focus though, plus you see more, and I think I only saw the shuttle once, so I’ve no idea how long the wait might have been!

The walk over to Great Divide reminded me just how much this isn’t a walking part of town, however. Run-down low-rise business premises, dusty and sun-bleached old houses – and roadworks, lots of them. Then you suddenly reach a regenerating area: the side roads are still dirt and gravel, but the scruffy yards surrounded by chainlink fencing are interspersed with well-lit new buildings, with more still under construction. 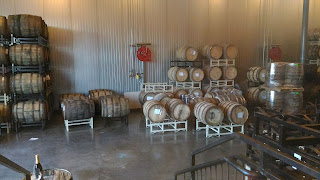 Like most of the other buildings, Great Divide’s barrel store is just a box, but one with large windows through which you can see – yes, barrels, lots of them (though it is by no means full, not at all). It’s a warm and easy place, though its location away from the main population clusters may explain why it closes at 10pm most nights. The bar itself is quite typical, with a long row of taps along the bar-back, and a list that includes several Farmhouse ales/Saisons and sours, reminding me that the sour beer fashion is still in full swing.

My curiosity piqued, I ended up trying three Saisons – Colette, Apricot Colette and Nadia Kali, the latter including hibiscus, ginger and lemon peel – and the Strawberry Rhubarb sour, before finally tackling the brewery’s flagship Yeti Imperial Stout, in this case in its 9.5% Espresso Oak-Aged version. I wasn’t wowed by the latter. Compared to the regular Yeti which I’ve had before, this version was just too much – especially too much bitter coffee and burnt bitterness. In hindsight it’s possible my tiredness had affected my palate, but still, I’d love to try blending a bottle of this with regular Yeti to see if it would integrate everything a bit better.

All the other four were rather good, with the funky-spicy and peppery-bitter Colette at 7.3% winning for me. It’s a great example of a style that’s already complex and interesting, without the need to tart it up – although to be fair the apricot version did run it a close second! 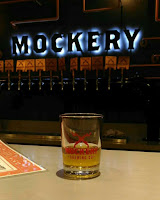 Mockery Brewing, a short walk away down an unpaved street, is rather different. Set up just three years ago when this area was taking off*, it pitches itself as a bit of an iconoclast (hmm!) and sure enough its beer list is eclectic. There’s the usual IPA, Blonde and barrel-aged, but there’s also Bretted and fruited beers, a salted Scotch ale, and what was meant to be a smoked Weizen, although it wasn’t a patch on the Schlenkerla Weizen which for me epitomises this “style”.

Best of the bunch were a well-made peppery and estery Rye Saison, and Funken Stupor, a dry and spicy Bretted pale ale that was a collaboration with Novel Strand. The latter is a Denver brewery so new it isn’t even open yet – no signs of a saturating beer market here yet, eh? 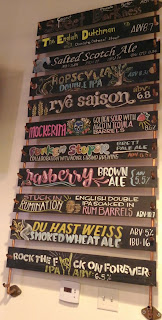 The funny thing is that although Mockery ought to feel pretentious, it didn’t. Arty and modern, yes, but the vibe was friendly and fun, and the beers were all decent or better. Yes, there was one that was also a bit confused flavourwise (Stuck in Rumination, their rum barrel-aged DIPA), but that’s true in so many Denver taprooms, and the overall feel was more that they were having a bit of fun messing with beer styles and treatments.

By now it was well past 11pm, still early for some but sadly way too late for the nearby Crooked Stave taproom. So it was time to wend my tired way back via yet another route, thanking 3UK for free data roaming and Google Maps as I went. I genuinely did a double-take on walking past a darkened building, glancing in, and spotting what was very obviously a shiny steel brewery of some size. It turned out to be the new Blue Moon brewery-restaurant – the original Blue Moon Brewery in the Denver baseball stadium may well have been the first of the ersatz "crafty micros” when it was set up by Coors just over 20 years ago.

Tomorrow would be another busy day – into the city, sadly too early for the downtown taprooms, to get the bus up to Boulder. It was only a short time in Denver, but an interesting one – a view of how much modern beer and brewing can help regenerate, but how it also is at risk from pulling in what we used to call yuppies. Maybe that's just the way this process works, and we've all failed to spot – or have just ignored – that the next step in the so-called regeneration process is yuppification. Sad.

*They have a 3rd birthday party set for 4th November.