How Gosnells helped make mead both fashionable and sessionable

Mead is fashionable again. Better than that, it’s commercial and very nearly mainstream, and a large part of the credit for that – at least in Britain – goes to Tim Gosnell and his meadery Gosnells of London.

He’s had several goes at creating a retail space of his own. There was the room above a restaurant in Peckham, there was the ‘mead garden’ of tables, benches and recycled wood dividers and planters set up on the concrete outside his industrial estate meadery – it was quite cute, actually, in a modern craft-biergarten kind of way.

And now there is the first mead bar on the famed Bermondsey Beer Mile, taking over the 72 Enid Street arch, between Moor Beer and Cloudwater. It’s a simple set-up – tables, chairs and benches fill the deep archway plus some space on the roadside, then there’s a bar at the back with storage behind.

The commercialisation of mead has been helped by the fact that, while what’s on the bar here is recognisably similar, Gosnells core range is not the sweet, almost liqueur-like honey wine meads sold in tourist shops and medieval markets, whose strength can be in the high teens or even the low 20s. Some of these honey wines were actually sweet grape wine flavoured with honey.

Instead, Gosnells is mostly session or ‘short mead’, a light version weighing in at 5% ABV or less*. As well as making it more approachable in a market where ready-mixed cocktails and hard seltzers are typically 4% or 5%, it also makes it more cost-effective to produce. Honey is normally the only sugar source for fermentation here and it’s not a cheap ingredient, so a 15% mead is a lot more expensive to make than a 4% one. In addition, a 15% or 18% mead can take a lot longer to ferment and finish.

Of course, while the production process is very similar to beer, minus the mashing and boiling, it does have to change a bit, as I learned when chatting in the mead garden a few months back with Gosnells head brewer Will Grubelnik. “We pasteurise it to stop the fermentation early,” he explained. That’s because if they didn’t stop the fermentation early, the yeast could simply eat all the sugar leaving a bone-dry liquid.

Control over the fermentation as well as the type of honey and any other ingredients used also helps bring out flavour, despite the lower ABV. “Honey is almost 99% sugar and water, with a very little protein and some other flavour compounds,” Will added.

“Stopping early allows you to collect some mid-fermentation products. Even though we’re 100% honey we’re able to show people a huge range of flavour profiles so there’s something to appeal to everyone, even if they’re scared of mead or don’t like honey!”

For example, Gosnells has produced a dry-hopped mead – not bitter but light and dry with a hoppy crispness, a mead brewed with Belgian Saison yeast, and several fruited, flowered or spiced meads, traditionally known as melomels and metheglins. There’s even a lightly soured mead, to ride the recent trend for sour drinks, and a series of postcode meads made with – and expressing the character of – honey from that specific area.

Bringing out the honey's individual character

“With mead you can be as free as you want or as concise as you want,” Will says. “For example, I might want to focus on the honey and how that changes over time. With the postcode mead I want to educate people, so I take a hive each from East and West London and from Hereford and the Kentish coast. I ferment the four honeys the same way to show first how the taste varies, and second, that urban honey is not ‘dirty’!”

He also produces some specials at wine-strength, which as I mentioned take a lot more honey. Where he uses perhaps 85kg or 90kg of honey per 1000 litres for the regular meads, these take 370kg per 1000. (By comparison, my homebrew meads used between 2kg and 3kg per 10 litres, depending how dry I wanted them.)

Mead is sometimes claimed to be the world’s oldest alcoholic drink. That may or may not be true – wine has a long history, and very early beer-like drinks seem to have combined several sugar sources, including honey alongside fruit and grains – but it’s undeniable that mead carries a certain mystique. The Mead of Poetry in Norse mythology, for example, or the mead of the ancient Greek Golden Age. 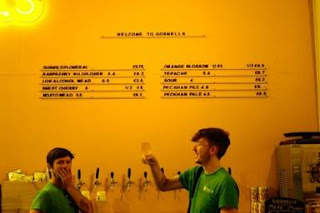 And some of Will’s superb specials would definitely fit well in that legendary category! For example, at the meadery I was lucky enough to sample a smooth and warming 13% mead matured in a plum sake barrel, and a rich and toasty Bouchet mead made with 50% caramelised honey.

Sadly, you are unlikely to find those two at the Bermondsey bar – they were very limited runs. But there are eight taps of other draught meads, which when I visited included one at wine strength and another constructed to taste like a Mojito. It certainly all makes for a refreshing change from beer.

*Session meads are still very much in the historical tradition, where we also find short mead and local honey-based but session-strength specialities such as Estonian Mõdu, Finnish Sima and Russian Medovukha. Again, it reminds us that honey has always been a fairly expensive commodity, so a 5% mead would have been half the price of a 10% one.