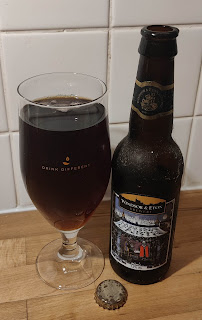 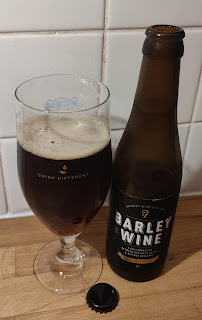 “I can relax a bit here, because everything has Brett in it anyway,” says Holy Goat co-funder and sour beer specialist Johnny Horn, comparing life in his own small Dundee brewery to his previous role, cuckoo-brewing sours for Vault City in the much larger – and more mainstream – brewhouse at 71 Brewing across town.

That relaxation, relative though it be, is clearly paying off, because the resulting beers are amazing. I have to declare an interest here, as Johnny’s a family friend and fellow ex-Viking, but the beers are still excellent!

At Holy Goat he focuses on two main brews: Goat Wizard is a 6.8% ‘Golden sour ale’, while Crimson Queen is a 7.4% Flanders Red. There is a third, an 11% Russian Imperial Stout called Foehammer, but that’s contract-brewed in Edinburgh by Newbarns, no doubt to keep it safe from all those sour influences.

“It’s all mixed-fermentation here,”  Johnny explains. “The primary ferm is 100% Brett, then we use our own mixed culture to do the souring and finishing.” Brett for the initial fermentation? Yes, you read that right – Brettanomyces is more often used for finishing, to dry out a beer by eating up the complex sugars that your regular Saccharomyces yeasts can’t digest, but at Holy Goat he’s fermenting a complex wort using only a pair of Brett strains.

The secondary mixed strain is equally interesting. It combines a Lactobacillus strain – that’s the bacteria that produces the lemony-tart notes in Berliner Weiss and assorted modern sours – with a Kveik. That’s the Norwegian farmhouse yeast that’s fascinated both of us since it was thrust out of obscurity some years ago, and which Johnny adopted with gusto – that’s him in effigy on Filungar, the collaboration Kveik IPA he brewed with Gipsy Hill, by the way.

The results are, as I said, amazing. The Vault City beers I’ve had have been very good, but most were very much fruit-forward with a layering of tart or sourness. Goat Wizard and Crimson Queen are more complex and multi-layered, and beautifully integrated with it.

The Crimson Queen in particular is gorgeous – tart and lightly balsamic sour, yet somehow smooth with it, it’s rich and fruity-dry with its Bretty juicy berry notes intensified by refermentation on local Scottish blackberries and tayberries.

Goat Wizard is funky and earthy, dry-sweet and sour with notes of lemon and stonefruit, yet despite its rich fruity flavours and tartness, it is both unhopped and unfruited – the flavours all come from the malts and fermentations. Having perfected the base beer though, Johnny is now experimenting with maturing it over fruit and herbs. We were able to taste from the tank a version aged over Sicilian citrus – bright, zesty and delicious, and subsequently released as Citrus Crusher. There’s also now a honey and elderflower version, called Honeybucket, which I very much look forward to trying – if there’s any left...

The icing on the cake was tasting the beers at the brewery last month, while on a family holiday in Scotland. Not only was it the first time I’d been inside a brewhouse in many months, but we’d not seen Johnny in more than two years.

The last time we met, he was still brewing with Vault City, which he also co-founded. He moved on from there last year – or perhaps it was Vault City that moved on, as they went back to Edinburgh while Johnny stayed in Dundee.

It amused me a little that the 10hl brewkit that he and his new business partners, Scan and Graham, pulled together is – like Johnny himself – a London transplant. The brew vessels and three of the fermenters were formerly at Islington brewpub the Earl of Essex, while his other fermenters are ex-Kernel. “We have 20hl fermenters coming, we’ll double-brew into those,” he adds.

Why so many fermenters for just two core brews? In a word, time. The beers spend a full three months maturing, so even if you only brew once a week, that’s twelve batches sitting around.