Is beer better 'from the wood'? 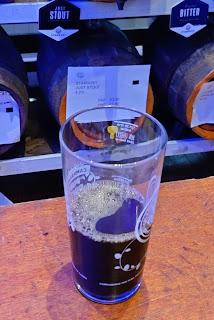 I’d never been to a wood cask beer festival before last week. I was due to be at the third Woodfest organised by the Society for the Preservation of Beers from the Wood (SPBW) back in May 2020, but of course it was cancelled due to you-know-what. So I was delighted to discover that not only was Woodfest #3 back on for May 2022, but it was at the same venue they planned to use in 2020, namely the Turk’s Head pub in St Margarets, which for me is about three miles from home – the previous two Woodfests were way up in the north of England. Admission was a fiver, but in return most of the beers were under £4 a pint, which is relatively inexpensive for the area.

It’s a nice venue. The bars were in the pub’s function room, which is more like a village hall, complete with a small stage and its own bar – with handpumps, of course. It’s well known locally I believe for hosting a comedy club and other events of that kind, and also opens out onto a large terrace or beer garden which it shares with the pub. 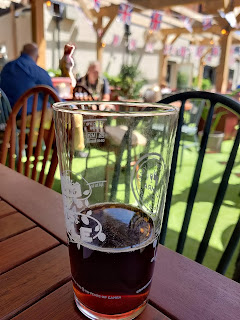 It was rather strange seeing 35 wooden casks racked up on a stillage. You quite often see them in ones and twos, perhaps decorating the back of a bar or even doing duty as plant pots, but rarely serving their intended purpose of serving beer!

The selection was great, ranging from a few sub-4% milds – I enjoyed the Tigertops 3.7% Dark Wheat Mild, with its notes of liquorice and roast malt, and XT’s roasty and bitter 3.1% Pi Black Mild – to a 10.5% Imperial Stout from Trinity, sadly run out by the time I got there. I topped out instead with a boozy and woody 9.7% Barleywine, also from Tigertops, and Cheshire Brewhouse’s excellent 8.2% Gibraltar Porter.

In between were plenty of Bitters, Stouts and Porters, and a few less common ones. Kölsch from the cask – or ‘Kölsch vom Fass’ – is a seasonal regular in Cologne that’s rare in the UK, but here was Orbit’s 4.8% Nico, slightly confusingly labelled as ‘Koln Lager’. Meanwhile another London brewery, Mondo, had casked its 5% London Alt – here labelled simply as ‘Altbier’ – for a significant flavour upgrade on the bottled version I tasted a few years back. This soft and malty-sweet Alt vom Fass, with its drying and grassy bitterness, also put me in mind of the German fashion in recent years for Kellerbier. 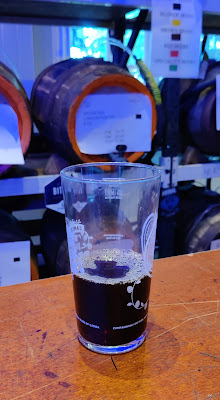 Back on the British styles, the stars for me were Harrogate Brewing’s delicious biscuity, fruity and bitter-sweet 5.2% Beeching Axe IPA – oh, and one from the handpumps on the ‘normal’, ie. metal casks, bar: East London Brewing’s rich and boozy 9.5% Imperial Stout.

So who goes to a beer-from-the-wood festival? Well, my local CAMRA branch chairman greeted me from the admissions desk – it turned out that the branch had helped the SPBW organise the event, supplying glasses, wristbands and stuff. There were a few more local CAMRA members I knew around the place too, but most were SPBW members, some of whom had travelled quite a long way to be there. And while there definitely were women and younger men there, I'd say the SPBW demographic is on average somewhat older and less diverse than CAMRA's – though just as friendly, of course.

And what of the festival’s raison d’être: those wooden casks? I suspect the challenge is that serving from the wood is not the same as barrel-ageing, and I do wonder if all the breweries understood that. Some of the beers I tasted felt overly woody – excessively so in one or two cases. Yet in others, there was a softness or lightness of touch that’s perhaps less evident with modern metal casks.

In short, my answer to “Is beer better from the wood?” is ‘Sometimes, but not always.’ And given that the results are almost always both interesting and drinkable regardless, I’m more than happy to carry on researching the answer!