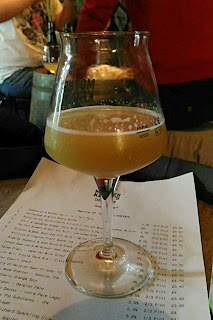 Most of the “craft beer revolutions” I’ve seen went through broadly the same stages. They’re not always in exactly the same order, and of course some brewers might jump a step or several steps – and you might notice a small amount of cynicism here – but I reckon you will find them all pretty much anywhere…

1. Discover American Pale Ale and IPA, be amazed by how much flavour it has compared to the industrially-produced and heavily-advertised lowest common denominator swill you’ve been drinking, and copy it verbatim. This is how most craft beer movements start.
1a. Ditto, but with British or Belgian ales.

2. Finally realise that if you’re just going to copy the Americans you probably can’t win – the real thing is better and has economies of scale. Plus it’s increasingly available everywhere, especially as good US breweries sell out to (or ‘partner with’) multinationals who already have strong distribution networks. Your only real advantage is local provenance, so you substitute local ingredients, for example to produce a German IPA or an Italian Saison.

3. Try to come up with a pretentious twist – adding pink peppercorns, say, or ageing in Tequila barrels. Of course, there’s a good chance other small brewers will also think of it, in which case it’ll be passé even before it hits the shelves. Worse, a few of the regional brewers are pretty fast to copy this sort of thing, again with better economies of scale and distribution channels. Still, if you’re the kind who rarely brews the same thing twice you’ll be onto a new fashion by then.

4. Rediscover – or in extreme cases, invent – local beer styles or traditions, then revive them and give them a ‘modern twist’. Sour Altbiers, cloying cherry beers, and souped-up Grodziskies.

5. Finally realise that what most people want is what they already know, but that some of them are willing to pay for better quality – or for a version with a better, more fashionable image. For example, many German craft brewers grew up in opposition to fizzy, bright yellow, industrially-produced ‘TV beer’, with murky ales becoming a signifier of rebellious authenticity. It’s ironic then that quite a few of them are now making Craft Pils, or Craft Lagerbier.

Fuller's & Friends at the Cask Yard

By all accounts, “The Cask Yard” at this weekend’s London Craft Beer Festival has been a great success. As last year, it’s presented and anchored by Fuller’s but features others too – not just cask ale from Sierra Nevada (Fuller’s distributes SN beer in the UK) but also the likes of Redemption, Thornbridge and Wimbledon.

It’s quite a change from the first LCBF events when there was cask, but nowhere near as prominently. Given the major part real ale plays in London brewing, a big cask presence is entirely fitting – no, entirely necessary!

It’s also been the first public outing for a project I heard about in confidence a few weeks ago – Fuller’s & Friends. Fuller’s brewers have been working with colleagues from around the country on a new set of collaboration brews. So far we’ve seen four of what I’m told will be six beers:

Two more to come, then – possibly during today’s final LCBF session. Sadly, I’ve neither a ticket nor the time to get over there this afternoon, but I’m hoping and expecting that all will also be on draught at this week’s Great British Beer Festival. My information is they will then be bottled and sold as a package.

Edited Addendum: Sadly I didn't see any of them at GBBF, but there's also visits from Cloudwater and Fourpure mentioned now on Fuller's Twitter feed, so I guess they are the 'missing' two that'll make it six.

More usefully, I've now heard from a second source that the six-pack will be sold exclusively through Waitrose. True or false, my Fuller's friends?
at 11:40 am No comments: 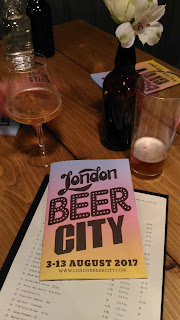 For the full programme pick up a printed copy (as seen here) from one of the venues, or visit the London Beer City website.
at 4:49 pm No comments: