A grand day out

Had a great day out on Saturday with the guys (and gal) from Hobbybrew Hamburg – if you're looking for people who want to step beyond the orthodox where beer is concerned, I reckon you can't do much better than chatting to home-brewers. After all, routine beer is so cheap here in Germany – as little as €0.50 a litre – the only reason to home-brew is because you want something that you can't get in the shops.

The plan was a trip out to Klindworths, mainly because it's a village brewpub with an ever-changing range of great beers, which is a bit unusual here, but perhaps also partly because it's just within the area covered by the Greater Hamburg public transport system, so anyone with a day-travelcard or season ticket can get there for free...

(Getting there did indeed work fine, though my concern at realising there was only one bus a day there was justified when it turned out that the expected return bus didn't exist, so we all had to pile into a taxi-van to get back to the train. Ah well.)

We arrived to find most of the place being set up for a wedding reception, and to a somewhat startled reception – apparently they'd wanted to tell us it wouldn't be a good day to visit after all because of the wedding, but had computer problems and lost our contact's details. I think they'd hoped when we didn't re-confirm that we weren't coming after all.

Fortunately, it all worked out fine – we didn't get the expected tour, but there was plenty of excellent beer and food. And because the bar we sat in also contained the coffee machine, we got several chances to ask the brewer questions while he made coffees for the wedding guests!

The star of the show beer-wise was the Walpurgis-Ale, a 7.3% black IPA thatwas brewed on the witches festival of Walpurgis Night (April 30th). The brewer said he wanted to do something appropriately "dark and witchy", and in this deep brown-black beer, with a big hopsack nose and loads of hoppy bitterness to complement its burnt malt and treacle notes, I'd say he succeeded admirably.

I was also greatly impressed though by his regular Landbier, which I'd not tried before as it is aimed at the Pils drinkers. I'd say it's actually more of a hopped-up and slightly hazy Zwickl, with citrus notes and quite a bit more depth of flavour than the average Pils.

We then turned – with permission – to the home-brew samples people had brought along. Of the four on offer, for me there was one solid hit, one pretty good and a couple of so-so's, and a very lively discussion followed, as did several more Walpurgis-Ales. All in all, an excellent afternoon out, even if I still can't quite work out where all my money went...
at 4:25 pm No comments: 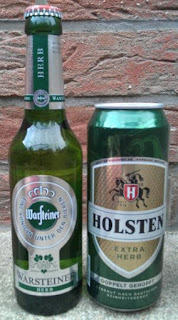 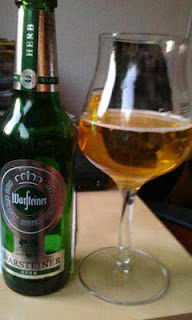 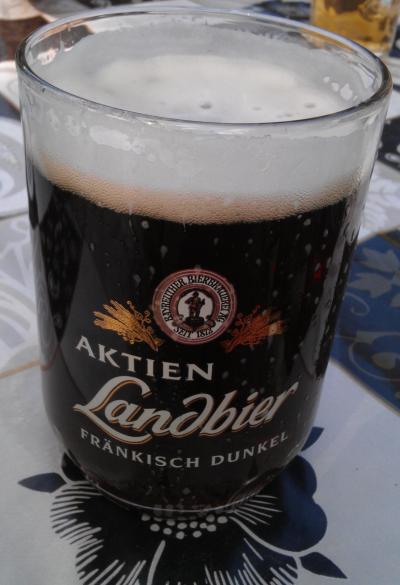 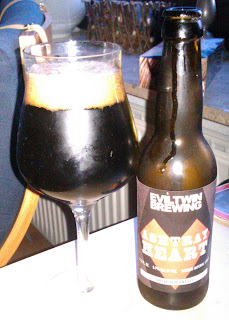 Every now and then a beer comes along and reminds me just how much I enjoy the Dark Side: this is one of those beers. Struggling for a comparison, I came up with vintage port and a barrel-aged barley-wine, getting married in a burnt-out toffee factory. Pretentious maybe, but it fits.

Produced by Denmark's Evil Twin Brewing – whose brewer Jeppe is the brother of Mikkeller's eponymous founder Mikkel – at De Molen in the Netherlands, at 8.9% this is almost a lightweight by modern Imperial Stout standards, yet it packs a big flavoursome punch.

Ashtray Heart pours a deep black-brown with a big foamy tan head. On the nose there's smoke and malt, plus hints of roasted coffee and smoky bacon. In the mouth it's well-named – there's notes of ash, leather, old wine, black treacle and a faint tartness. Then in the finish, a little malty sweetness, a hint of roasted cocoa, and that burnt bitterness that tends to signify roasted barley.

If you don't like smoked beers, you'll hate this. But if you like them, or if you're neutral to them but like strong stouts and porters, I suspect you might love this.
at 10:57 pm No comments: