There's a bunch of beery things coming up in London over the next few weeks, but the one I think I'm looking forward to most is Craft Beer Cares – I've already bought my ticket. This beer festival run for charity was a really good event last year – excellent beer, all donated by the brewers, plus side-events such as a beer raffle with great prizes.

This year's edition takes place at London Fields Brewery in Hackney – or rather, at the brewery's event space around the corner on Mentmore Place E8. They're expecting beer from more than 20 breweries, and proceeds from the event (which raised more than £6000 last year) will be donated to London-based anti violence charity Art Against Knives.

“We have the fortune to be able to build on our first event with a bigger venue, more beer, and more sessions, to be more accessible and hopefully raise even more money for charity this year,” said Gautam Bhatnagar, the event's founder. “We couldn’t do it without the kindness and donations of the breweries involved, the volunteers and the logistical help of many distributors in the industry.”

Craft Beer Cares will run three sessions, from 11am-5pm and 6pm-12am on Saturday 29th, and 12pm-6pm on Sunday 30th. Tickets are £12.50 per session, which includes a festival glass and tokens for four half-pints – you can of course buy more tokens on site.

There's more to be confirmed, say the organisers. Based on last year's event, we can expect maybe eight or ten beers to be available on draught at any one time, plus others in bottle or can, and new kegs coming on tap as others run out.

Tickets for Craft Beer Cares are available via Eventbrite.

As I mentioned a few days ago, there were several other beer events run alongside GBBF and London Craft Beer Festival. I'm not quite sure whether this is trying to take advantage of the fact that there will be extra beer fans in the capital, or whether it's just an obvious time to hold events. Anyway, one such was Franken Fest, a celebration of beer from Franconia (or Franken) beer hosted at the Moor Beer Taproom in London's Bermondsey over the same weekend as GBBF (which also featured several Franconian beers). 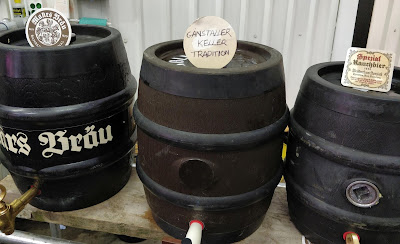 Although the two largest cities in Franconia – which is today part of Bavaria, but very much has its own identity – are Nürnberg (Nuremberg) and Würzburg, the most famous from a beer perspective is of course Bamberg, the reputed home of Rauchbier. Yet while Rauchbier's had quite a renaissance across Germany and abroad in recent years, it's not the most 'typical' Franconian beer at all – that would be Kellerbier.

This malty unfiltered amber beer, which is lagered but can be top- or bottom-fermented, is at its best when served straight from the cask in the region's beer gardens. These are in turn known as Kellers, perhaps because so many are right outside the eponymous cellars where the beer is lagered. And the attraction of Moor's Franken Fest was the promise not just of Franconian beers, but that they'd be served from the cask.

Discovering on arrival that they were charging £5 admission almost put me off going in. OK, you got a Bierkrug (pottery beer mug) for that, but it was non-refundable and I have more than enough glassware and stuff! I'm pretty sure they miscalculated here – I relented and paid up, but over the course of the next two or three hours I saw several groups of drinkers enter then leave again, muttering, when they found out the cost. And certainly they didn't sell out of beer – there were still Kellerbiers on sale there a week later, to judge from the check-ins on Untappd.

Be that as it may, the beer was excellent. Due to limited space on the festival 'bar', they only had three cask Kellerbiers available at a time; when one was empty, it was replaced by something different. Two or three more were available on keg on the main bar, alongside a full range of Moor's own beer, including a couple of new releases. By chance, two of the three on offer when I arrived were ones I've drunk at their respective breweries in Bamberg – Mahr's aU ("ah-oo") and Spezial Lager Rauch. So I went for the third, which was Mönchsambacher Export, and it was gorgeous – dry-bitter over a rich and full malty-sweet body.

Sadly, some of those I'd hoped to try (eg. the Schammelsdorfer and the Griess) weren't on while I was there, but the Goldener Löwe (Först) Altfränkisches Lagerbier and Thuisbrunner Elch-Bräu Dunkel were both good, as was Gänstaller's reworked Kellerbier Traditionell. In a gap while I waited for the Fränkisch beers to rotate onto something new, I also had a try of Zero Brew – not a non-alcoholic as the name implies, but Moor's new 6% American Amber Ale, all malty and toasty, with notes of pine and orange. Very different from the Franconians, but equally lovely.

And that was it – pausing only to sell my krug to a new arrival for a quid, I left, filled with good beer and a strong desire to revisit Franconia.
at 11:43 pm No comments: 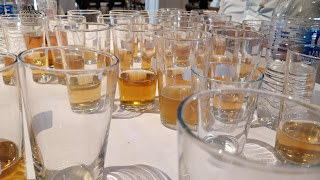 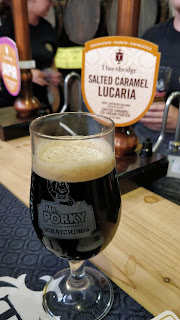 Next: Franconia comes to London
at 1:19 pm 2 comments: 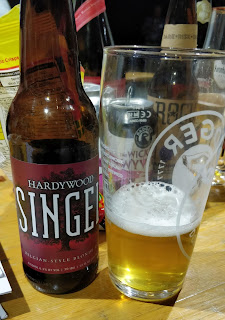