Now there’s something you don’t see every day: mead on tap. And not just that, there’s even frozen mead cocktails and seasonal meads made with specific honeys. Welcome to Gosnells at the Coal Rooms, upstairs in old railway station buildings at Peckham Rye, which officially opened just a week ago.

Peckham, as in “Only Fools and Horses”, “Desmond’s” and Rose Tyler’s council estate home? Yup, that’s the one. While the station is now surrounded by grime and graffiti, it must once have been pretty grand. The area seems to be recovering some of that too, judging from how busy the upmarket restaurant on the ground floor was, even on a Monday evening.

It’s also where Gosnells brewery is – about two minutes from the station, said Tom Gosnell. He added that there is a small taproom there, but it’s on an industrial estate, so the town centre made a lot more sense for their ‘proper’ brewery tap. And a nice mellow set-up it is too, with a relaxed gastro feel to it, excellent bar food from the restaurant kitchen downstairs, and of course mead on tap.

Gosnells London Mead is medium-sweet to my taste, light-bodied with distinct but not cloying honey notes. If it’s chilled, an unusual aroma of orange juice emerges too. It is also quite light in alcohol terms, at ‘just’ 5.5%, making it a Hydromel in meadmaking parlance. By comparison, most commercial and home-made meads will be honeywines upwards of 12%, with popular sweet fake-meads such as Lindisfarne and Bunratty weighing in at almost 15% (they’re fake because they’re actually grape wines with added honey).

Tom told me that, like other commercial meadmakers I’ve met, he fell in love with the drink in the US, where artisan meaderies have been a thing for at least 20 years. “The US was the first time I’d had really good commercial mead,” he said. “There’s something like 500 meaderies there now.”

He said he came up with his recipe about four and a half years ago. It has a kilo of honey per five litres of water, and a Pilsner lager yeast – by comparison, mine has around twice the proportion of honey and a wine yeast – and that they stop the fermentation and pasteurise to get the desired flavour and strength.

Although the regular brew was called London Mead*, the locative referred to where it’s made, not the ingredients – it’s actually made with Spanish orange blossom honey (hence the aroma). It’s the same problem I’ve heard before – there just isn’t enough locally-produced honey. Gosnells can get sufficient local honey to make monthly single-origin specials, however, such as the 8% ABV Biggin Hill mead that we also sampled, which was made using honey from Kentish beekeeper “Dave from Biggin Hill”. This was rather drier than the draught mead, and had an intriguing almost beer-like malty character.

“It shows two extremes of what you can achieve with mead,” Tom explained. “It’s all about doing something different with the honey you’ve got – you taste the honey and adjust the process...” He added that they – he has a head brewer now, rather than making it all himself – also do specials with adjuncts, meaning extra flavourings such as hibiscus or hops. Indeed, one of the others we tasted was their intriguingly tangy Citra Sea Mead, which is flavoured with lemon peel, tarragon, Citra hops and a dash of sea salt.

Add in the mead cocktails list and the ability to pour it simply cool or completely chilled, and it’s a surprisingly broad palette of flavours. As Tom declared at the official opening, “There’s a lot you can do with mead, it’s going to be a very exciting year this year!”


*I say it ‘was’ called London Mead because it went through a rebranding last year. It’s now simply called Gosnells, and is sold in 75cl bottles instead of 330ml. The aim was to move away from the usual association of mead with beer – for example, major beer-lovers websites such as Ratebeer and Untappd also list both meads and ciders – and towards the wine market instead. I can’t help thinking that would make more sense for a 12% honeywine mead than a 5.5% hydromel, but there you go.

The Devil is in the barrels 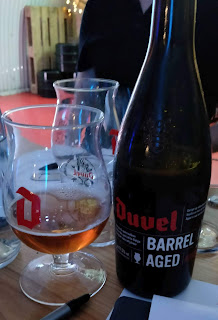 After an evening in the Bottleshop Bermondsey with the folks from Duvel Moortgat UK, who were launching the latest Duvel Barrel-Aged edition, I’m still in two minds about barrel-aged beers. Are they better as they come from the barrel, or should you taste them carefully and blend back for a ‘beerier’ flavour profile?

This is the third year Moortgat has run this project. The first batch used 100 Kentucky Bourbon barrels, said Duvel UK marketing manager Natalya Watson, while  the second had 190 and the latest was put into 351 barrels last year. She wasn’t sure if they were new barrels every year, but from reading Duvel's website I think they re-use them after re-impregnating with fresh Bourbon.

They now have barrels from six different distilleries, including Four Roses, Buffalo Trace, Heaven Hill, Jack Daniels and so on. This highlights the challenge of acquiring used barrels in bulk, which is why I reckon they're being re-used. The aged beer was all blended together for consistency before bottling, Natalya said. Bourbon barrels are 200 litres or 53 US gallons, and each yielded enough to fill around 240 75cl bottles – I suppose the 10% disparity must be leakage and other ‘process losses’.

The result is an amber-brown beer that almost glows in the glass and has aromas of sweet vanilla Bourbon, quite unlike the yellow of Duvel itself, with its lemony spicy-hoppy nose. The barrel-aged version is rather sweeter too and warming, with more vanilla and an unexpected faint salty note in the finish.

It’s a lovely beer, and people all around were enjoying it for itself, but for me it was a little too barrel-heavy – too much like drinking Bourbon. So since we had both on hand, I tried mixing some Duvel Barrel-Aged with bottled Duvel in about a 50/50 blend. The result was a little lighter, drier and more bitter, livelier (the barrel version had only a very light sparkle) and yes, beerier. I’m not sure what this proves, however, apart from the fact that tastes and preferences vary!

Natalya also introduced those of us who’d not met it before to Duvel on Tap. This is not a draught version of bottle-conditioned Duvel, but the same beer put into kegs and keg-conditioned (yes – if it weren’t for the carbonation that would make it real ale). She explained that the distinction is important because Belgian brewers typically adjust their recipes for kegging, in particular lowering the carbonation to avoid fobbing (excessive froth).

Duvel’s brewers didn’t want to do that, so instead they came up with a new dispense system for their branded fonts. The problem was that it’s a remarkably gassy beer – its CO2 content is twice that of standard keg beers and three times that of many craft beers. The solution involved two metres of 3mm piping (far narrower than usual, and non-reusable as it’s too fine to clean) to ‘break’ the pressure in the keg, plus anti-fobbing training for the barstaff. 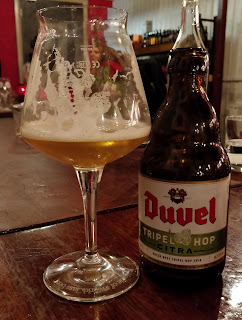 The initial problem for me was that it was too heavily chilled. Duvel recommends 5C for the bottled version, which I think is already too cold, but I reckon the tap beer was even colder (annoyingly, I’d no thermometer with me to check). Still, too cold is better than too warm, and once the chill had lifted the beer opened up considerably while remaining very drinkable.

Mind you, despite being the same 8.5% brew as the bottled Duvel (and Duvel Tripel Hop) we’d been drinking earlier, it didn’t seem as complex. The hops were still there, but not the lemony-spicy note – I wonder why, if they’d got everything else pretty much the same? Still, a lovely beer and one to watch out for.

My thanks once more to Duvel for supplying free beers and arranging the tasting, and my apologies again for how long it's been since I last posted here. Life keeps getting in the way...