To re-purpose an old joke, beer/food matching events are like buses – none for ages, then three come along at once. Just to confuse things, I’ll write about the first of the triad separately, as the food-matching element there didn’t coalesce that well, so it ended up being secondary to the chance to taste beers from DE15, which is Marston’s new nanobrewery.

Instead, let’s start the following day, with the British Guild of Beer Writers’ annual dinner. A team of four had worked together on curating the menu. One of them told me some of the staff of the hotel where we had the dinner had joined in too, but to learn rather than advise, as they don’t do this kind of thing routinely – indeed, one reason for running these events outside the ‘beer world’ is to evangelise.

We began with roasted Arctic cod, served over a fennel-based bedding and paired with 01/31 Saison from Brew By Numbers, which features two New Zealand hops (Motueka and Wai-Iti) and one Australian (Vic Secret), all of which typically contribute notes of tropical fruit and an assortment of citrus. The Saison was delicious on its own and also worked pretty well with the fish, although for me the latter’s almost-vegetal character didn’t quite mesh with the fruitiness of the beer.

The top pairing was the main course: roasted duck breast with roasted salsify, celeriac and orange sauce, matched with Wild Beer’s Modus Operandi, a complex and fascinating sour red ale. This was also the course with a veggie alternative – roasted aubergine and salsify, again with orange and celeriac (among other things!), but partnered instead with Wimbledon Brewery’s Quartermaine IPA.

Of course, everyone simply had to try both beers “just in case”, and yes, the toasty-crisp and malty-bitter Quartermaine could have gone well with either, but didn’t go as well with the duck as the Modus did, while the Modus overpowered the roasted veg. So, great choices there.

For a change, dessert was light-coloured, but paired with a dark beer – in this case, apple & rosemary mousse with caramel ice cream, with a bottle of Dark Side of the Moo, a 7% Imperial Porter from Old Dairy Brewery. Roasty-dry and pithy-bitter, with notes of coffee, ashes and strawberry, the latter is almost an Imperial Schwarzbier, and it provided an interesting contrast to the creamy-sweet dessert. A good reminder that when you’re food-matching, a good contrast can be even more complementary than a strong similarity.

The cheeseboard also brought a less traditional pairing – rather than a Barleywine, or perhaps an ESB, they went for a richly-hoppy and fruity-dry American-style IPA, namely Fourpure’s 6.4% Shape Shifter. And it worked well – the earthy hoppiness, with its fruity and onion skin notes, cut through the creaminess of the cheddars and the other cheeses.

The third set of matches the following morning was very different. I was one of a small group invited to brunch by Borough Wines & Beers, a company which used to be called simply Borough Wines but has pivoted into beer in a significant way – you’ll now find a small but well curated range in each shop, and it even brews its own beers in the basement of its Hackney shop, on a nano-brewery appropriately called Brewery Below. Also in that basement are a tiny kitchen and Pete’s Dining Room, which is an event space with – rather unusually – an iron grille for a door. It turns out this is not a prison for beer writers, it’s just that this was originally the basement of a bank, and this was the vault.

This time, the menu was all about showing how well a good London-brewed beer can work with spicy food – well, after an introductory beer cocktail. Featuring grapefruit, lemon, elderflower liqueur and Pilsner, this was tasty yet the beeriness was rather low-key. Beer cocktails have been popular in some places for many years, has their time come in London?

Anyway, after that it was on to Orbit Neu, a Düsseldorf-style Altbier (yes, there are other Altbier styles) brewed in South London. I’ve enjoyed Neu before but not as it was here, paired with a sweet brioche bun filled with sliced spicy chorizo, a dab of sweet chilli jam, and avocado. And it worked well, the malty sweetness of the Alt complementing and smoothing the spicyness of the food.

Next up was a sort of daal, made with tarka beans and accompanied by Beavertown’s collaboration The You Zoo. The latter is an IPA which at 7.5% verges on the Double, and features two ingredients that have been very fashionable among edgy brewers in recent years – yuzu, which is a citrus fruit, and tea, in this case Formosa Oolong. To my surprise, it was the food that expanded the beer here, with the daal bringing out the beer’s fruity bitterness.

It was fish next – “blue corn smoked haddock arepa” – I had to look up the latter, it’s an unleavened maize bread from South America, so I assume it’s the arepa, not the smoke, that’s blue corn. I also hadn’t realised that blue was one of the many colours that maize comes in, but it is! Anyway, this was served with Hop Chowdah, a 6.9% New England IPA from Mondo in Battersea. Murky and fruity-hoppy with mild peppery and orange notes, this was excellent with the spices.

So yes, IPAs and bitters do indeed go very well with spicy food, which makes it doubly frustrating that most curry houses have such crap beer lists.

Also frustrating though were my own attempts to do beer and food matching over the holidays. I think part of the problem was that I was trying to match to foods I’d not yet tasted, because we hadn’t finished cooking and they were stuff we’d not cooked before. It’s salutary to recall that in both these cases, the ‘curators’ had worked with samples of both the beers and the menus. You can do a lot with guesswork, but you really need a taste to work with. Ah well.

And on that note, I wish all my readers a Happy New Year, full of excellent beer and food. May your bottles never gush and may all your bars be beery ones! 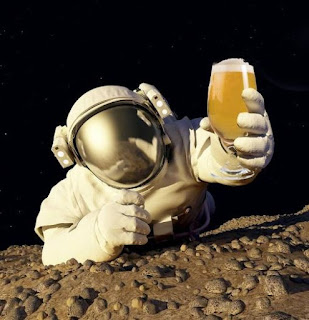