It may be a big name in non-alcoholic beer these days, but it wasn’t always thus – Big Drop has had to work at it. It did also have the advantage though of getting in early when it comes to specialist NoLo brewers, as opposed to regular brewers who dabble. 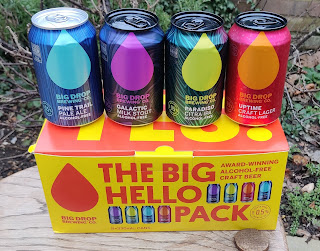 When it launched around five years ago, I think Big Drop was also one of the first to offer a broad range of beer styles. I remember being particularly impressed by its original 0.5% stout, but I’d not tried any Big Drop brews for a few years, so I jumped at the chance when asked if I’d like to try the current core range.

What arrived was a Big Hello mixed case. Listing at £14, this contains two cans each of Pale Ale, Citra IPA, Milk Stout and Craft Lager, and yes, they – mostly! – show just how far non-alcoholic beer has come. To stay on-trend, they’re all gluten-free as well.

Starting with Pine Trail pale ale, there’s a splash of citrus and, yes, pine on the nose and then it’s malty and light, yet properly crisp and bitter. The Citrus IPA is hoppier of course, lemony and bitter, and perhaps the star of the show – it’s light-bodied yet full flavoured, just like many alcoholic session IPAs. 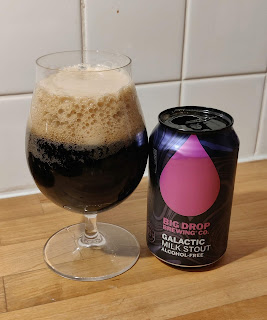 Also good was Galactic Milk Stout – a little bit watery but properly flavoursome, with notes of burnt malts, roast coffee, milky chocolate and a little cola. Again, I’ve certainly had worse alcoholic stouts – and that is absolutely not meant to damn this with faint praise – this is a non-alcoholic stout that can stand up to its alcoholic peers.

The weak spot for me was the Uptime Craft Lager, although this does seem to be one of their popular brews. It certainly wasn’t bad, and it does have hops present, but it was a tad worty on the nose and reminded me a bit too much of the watery non-alcoholic lagers of old. Sorry!! And maybe it’s just me – I’m not a huge lager fan at the best of times, Franconian Kellerbiers excepted of course.

The Big Hello pack would be a great option to have on hand at a party, say, to cater for drivers and those who just need a break from the full-fat stuff, but who’d still like to have a choice – and of course it's a good way to experience a range of non-alcoholic beers. Once you've done that, there’s plenty of other nice ones to try – for dark beer, I also recommend Drop Bear’s Bonfire Stout, say, and for lager you can’t really go wrong with Lucky Saint. 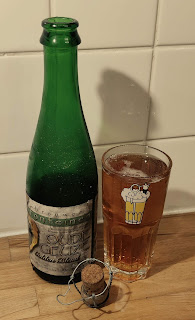 Armand gave me this bottle of his Oude Geuze Golden Blend (12/03/2014 bottling, 7.5%) in 2015, when I visited the old 3Fonteinen brewery as part of a group of beer writers. He was a fantastic host, a generous and social man who showed us all around and indulged our many questions about Lambik and Geuze, and of course about his and his family's brewing and blending work.

I've been saving it ever since for a special occasion, and today, sadly, is that occasion. He retired from the brewery in 2019 after he was diagnosed with cancer, and despite the best treatments over the following years, he passed away last night, aged 70.

Announcing the news today, his team said, "When you read this, open a good bottle and raise your glass to Armand and look forward to Life. Armand wouldn't have wanted it any other way." So that's what I'm doing.

The beer's a bright golden-brown and sparkling, with a fast-settling foam and a tart lemony nose with hints of cheese and cider. It's tart-sour and lightly earthy, more lemon and apple notes, almost sticky on the finish. A little funk re-emerges as the chill lifts, alongside a faint hint of honey. Lovely.

RIP Armand. I'm sorry the pandemic and all meant I didn't get to see your new Lambik-O-droom yet. Maybe this year!