A week around Bamberg #6: When is a Vollbier actually a Dunkel? 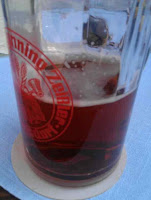 Part of the problem is terminology. In German, Vollbier ("full beer") is the taxation class for regular beers of around 3.5%-5.5%, but because for many breweries their Vollbier is an Export Helles or somesuch, some foreigners have assumed that Vollbier=Helles.

Yet here's Brauerei Penning-Zeissler producing a brown Vollbier – the photo here is its tasty Hetzelsdorfer Fränkisches Vollbier dunkel. Simply, it is the brewery's "regular beer". (John Conen, author of the beer tourist's bible Bamberg and Franconia, noted the same thing - that in Franconia, Vollbier is typically darkish red-gold and relatively hoppy.)

Similarly, Dunkel just means dark. Ask for a draught Dunkel at Mahrs Bräu brewery tap, as I did, and you'll get not their ETA Hoffmann, which is more of a Munich Dunkel, but their Ungespundet. It's light brown but it's darker than Mahrs Hell or Weiss.

Equally, Helles/Hell merely means pale and is not automatically a synonym for Dortmunder Export or Bavarian Helles. For many breweries, it is simply the one of their two regular beers that is not Dunkel. If you want to refer to a beer style, you probably need to add that extra qualifier.

Oh, and Landbier isn't a specific style either - sorry, Ratebeer! It means country beer and is often applied more as a marketing term, like "traditional" or "craft" in English. Many Landbiers are maltier than most lagers and may be in the same traditional mould as a Franconian Braunbier, but others are golden Pilseners. Confusing, eh? (-: