Unlike day one, this was also a family day, which meant finding places which would be reasonably child-friendly. It also meant a bit less drinking and a bit more hanging around playgrounds and the like...

Heidenpeters ✪✪✪
Another market-hall pub, and another one that was hard to find. It is tucked away in a corner of Markthalle Neun in Kreuzberg, and is pretty much invisible unless you happen to look down the correct aisle. Just two beers are on tap at a time; when we visited they were a rather tasty Pale Ale and an interpretation of a Belgian Witbier that was perhaps just past its best.

Although it is an old structure, Markthalle Neun had shut down and was reopened with the gentrification of formerly run-down Kreuzberg. So while there is an Aldi in the corner and there are "proper" market traders, the dominant theme now is gourmet coffee, crafty knick-knacks, and edgy world-food (the South African barbeque platter was excellent). If this appears off-putting, it isn't meant to be – it's a nice busy place with a good play area for kids, and is popular with the locals.

So too is Heidenpeters. It's almost as if the aim is to produce beers as different from industrial Pils as possible, artfully made to appear crafted and usually slightly hazy – this latter is the current fashion in Germany. And it seems to work – the beers are idiosyncratic and popular. Many of the surrounding coffee and food stalls also sell bottled beers, but pretty much all I noticed on the many tables was Heidenpeters glasses.

Hops & Barley ✪✪✪✪
Based in Friedrichshain, another formerly run-down area that's now cool and trendy, Hops & Barley is a cosy pub converted from a couple of shops by the look of it. The modern-looking small brew-kit in the corner looks slightly out of place, all brushed stainless steel against the old green and white ceramic tiles, dark wood panelling and wooden floor. 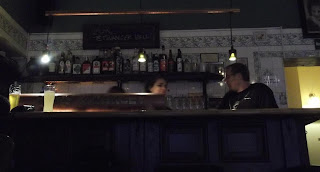 While the beer range is only slightly wider than the average for a German brewpub – a Pils, a Dunkel, a Weizen and a seasonal – the beers themselves are jolly good and the place just feels right. There's seating outside too, where you can watch the trams rattle by, plus a room at the back which I guess is for when it's really busy or raining (or maybe for after 10pm, when I think they have to close the outdoor seating).

One oddity was that, apart from the staff, very few people were speaking German. There's a lot of hostels and other accommodation in the area – indeed, the pub has rooms to let – so it can be a bit touristy. It was all pretty mellow though, even a toddler climbing onto a bar-stool to ask for apple juice didn't faze the barman, and we'd have happily stayed longer if we could.

I know there are a lot of Berlin brewpubs that I missed. This trip was only ever intended as a sampler, so I deliberately tried to visit places that seemed to be doing something interesting with their beer, not merely brewing just to have their own Pils. Even then I missed promising places for one reason or another – for example Brauhaus Südstern which annoyingly I now see I could easily have got to on day one. Ah well, I guess it means another trip to Berlin is required!
at 10:29 pm