The fun and challenges of beer and food matching

It’s been a bit of a feast of beer and food pairings lately, first at the annual dinner of the British Guild of Beer Writers and then at the rather excellent Hero of Maida gastropub in London’s Maida Vale, where UK beer distributor Euroboozer kindly hosted a “beery brunch” for writers. The former focused on British beers, naturally enough, while the latter included Austrian, Belgian and Danish brews – Euroboozer represents Schremser, Steigl, Boon and Mikkeller, among others.

It was fascinating to see how much better some pairings worked than others, but also to be reminded that although there was general agreement, different people of course preferred different pairings.
The rule of thumb with beer and food matching is you either go for complementary flavours or contrasts. For instance, a hoppy IPA can work well with curry, which to me implies complementary, but it can also match cheese, where the bitterness doesn’t so much contrast as cut through the oils.

Interestingly, both menus featured scallops – they’re clearly the shellfish of the moment. In one case, seared scallops were paired with Chalky’s Bite from Sharp’s, in the other the scallops were baked and served alongside Sonnenkönig II, a 9.5% Double Witbier aged in Tequila barrels (left), which comes from the pilot brewery of Austria’s best-known lager brand Steigl.

Both combinations worked very well. The dry tang of Sonnenkönig against the fishy sweetness of the baked scallops, and the spicy maltiness of Chalky’s Bite – a 6.8% herbed strong ale that makes me think of a Belgian Tripel – with the toastier seared scallops. A second fish dish, smoked haddock tartare, was paired with Riesling People, a hazy IPA brewed with grape juice – it’s one of Danish brewer Mikkeller’s takes on the modern beer-wine hybrid style. Again, a lovely beer, almost gin-like in its dryness, but for me it didn’t bring out the flavour of the fish.

Moving on, brunch brought us brioche buns filled with bacon, cheese and egg, paired with Boon Oude Geuze Black Label. This is a stunningly good beer, the driest Geuze that Boon produces, and it did a great job of contrasting with the lightly fatty and salty character of the bacon and cheese. I’ll try to remember Gueze as an option for cheese and charcuterie in the future! 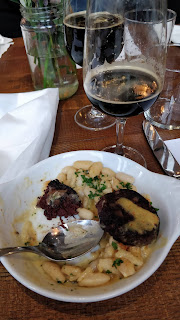 The main course for dinner, roasted Welsh lamb, brought not one but two pairings. The intended one was Fourpure’s smoky-sweet and rich Oatmeal Stout. This is a very fine beer, but somehow the combination of that sweetness with the equally rich meatiness of the lamb didn’t work as well for me as the second beer on the table – Marble’s tropical and resinous Hopoplata. This gorgeous 7.2% West Coast IPA was intended to pair with the vegetarian option, but worked extremely well with the lamb – its hoppy and bitter fruitiness contrasted with the meat, each bringing out the richness of the other.

Back at brunch, the meat course was an amazingly delicious Gascon black pudding with white beans (right), served with Steel Toe Milk Stout from America’s Ska Brewing. This time, the creamy and slightly smoky sweetness worked excellently well, perhaps because of the softer – though equally rich and lovely – flavour and texture of the black pudding.

Time for dessert, and a sticky-toffee pudding paired with OTT, a classic 7% old ale from Hog’s Back. This match did a great job of bringing out the cocoa and fruit cake notes in the beer. We also had on the table a bottle of Greene King’s Heritage Vintage Fine Ale – a rather excellent strong ale brewed with Chevallier heritage barley – so for curiosity’s sake I also tried that with the pudding. Dry-sweet and lightly toasty, it too worked very well, confirming strong ales as a good pudding choice!

While brunch now moved on to a liquid course – a tart and tangy Boon/Mikkeller collaboration where they aged Geuze in white Vermouth foeders – dinner wrapped up with an amazing range of British cheeses, quite simply the best cheeseboard I’ve had in a long time. They were served with another strong ale, this time from the far north – Orkney Brewery’s 10% Dark Island Reserve. With such a variety of cheeses, the aim (according to the tasting notes from fellow writer Jacopo Mazzeo) was to provide a beer complex enough to complement them all. It worked well, although now I can’t help wondering how the cheese would have gone with something like that white Vermouth Gueze or perhaps a strong Farmhouse Saison…