What is bottle-conditioning – and why do we do it?

“So it will have changed flavour, and secondly it will have more fizz in it. Bottle-conditioned beers are the supreme example of packaging beers. You do get some ingress of oxygen but the yeast mops it up – we opened a bottle of 1979 Vintage, for example, and the yeast was still viable.”

He was speaking at an event hosted by Marston's a few weeks ago, when a group of brewers and beer writers got together to discuss the past, present and future of bottle conditioning. We’d actually started by talking about the widespread assumption – fuelled in part by CAMRA’s ‘Real Ale in a Bottle’ (RAIB) validation scheme – that bottle-conditioned (BC) beers and real ales are the same thing.

Cask as a precursor

Was John Keeling right, though? Certainly there are clear links between real ale and bottle-conditioning. For a start, if you produce cask beer then it’s easier to do a BC version – you just bottle the cask version, said Harviestoun’s Stuart Cail. The advantage is that if you bottle it right – he uses big hand-bottled flip-tops – you can make it ‘premium’ and add a bit of theatre in a market where as he put it, “cask is not esteemed.”

Where it gets more interesting is when you use bottle-conditioning as just one step in a more complex process, he added. By way of example he offered a BC version of Harviestoun’s already highly regarded Ola Dubh (Black Oil) which had been aged in Highland Park whisky casks then krausened – dosed with fresh wort – to return it to life. The result was stunningly good, rich and heavy with a whisky tint, treacle-sweet yet burnt-dry, fruity and complex.

Along with John Keeling’s reminder that “in BC you get negative and positive reactions. They go in waves” as different microorganisms get to work on different components in the beer, it made me think: They’re both right, aren’t they? Yes, you can readily bottle beer brewed for cask, but that doesn’t automatically mean it ends up as ‘cask in a bottle’, because what happens to it next can be very different.

It certainly can be a route to ‘bottled cask’, as Marston’s brewer Pat McGinty explained. Marston’s wanted bottled Pedigree to taste more like the cask version, so its brewers had to do a lot of trials to work out the best way to achieve that. “We got way more of a fruited flavour when we put yeast in,” Pat said. “After a couple of weeks it had more carbonation, and was more recognisable as the cask beer.”

Something a lot of brewers (including Fuller’s) do is to filter and then reseed with fresh yeast for the bottle – preferably a different ‘sticky’ one that will settle to the bottom. Marston’s didn’t need to do that though, thanks to its yeast and the celebrated Burton Union fermentation system. “The Burton system traps the yeast and we can crop it nice and fresh,” Pat said. “It’s great for brewing but also perfect for bottle conditioning – most yeasts flocculate at the top but Marston’s yeast hasn’t made up its mind!”

He added, “Two weeks after we produce the beer, we bottle and cellar it. We put a 12-month shelf life on it, you can consume it beyond that but really its flavour will develop beyond [the intention of] the brand.”

Going through the four seasons

There we have it again – give it time and it’ll go further, even more so if you give it a bit of variation in storage, added John Keeling: “They would not have had temp control in the past. To me going through the four seasons makes sense, why not let it go the way it wants to go – and the way the outside temperature wants it to go?” 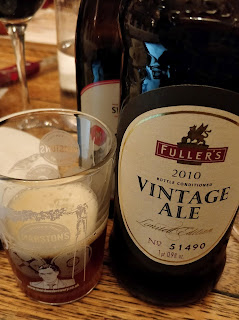 John told a tale about the development of Fuller’s Vintage Ale to illustrate the changes that time can bring. “When we developed 1845 [in 1995] we put one year shelf-life on it, but when we tasted it at one year old it was even better, so we had the idea of doing a vintage like you would with wine. Because the first Vintage Ale was 8.5%, we decided to put three years on it, we couldn’t put longer because the labelling regulations said you couldn’t. Now you can, and we put 10 years on!”

To illustrate, he offered tastings of the 2017 and 2010 Vintages. The former was rich and warming, fruit and lightly peppery, while the latter had picked up light oxidation notes – iodine, a little dry dustiness, a faint woody note – reminiscent of an old Madeira wine, in fact.

Not everyone filters and re-seeds the beer with fresh yeast, mind you. St Austell head brewer Roger Ryman told how they used to do that, dating back to his strong witbier Clouded White winning the Tesco Beer Challenge. “It was unfiltered in the competition – we had to ask if market was ready for that, and we decided to filter then reseed,” he admitted.

When the St Austell brewers subsequently tasted aged beers, they discovered that while others were showing signs of age, Clouded White was not. So then they did a BC Admirals Ale and two years later they added Proper Job to the BC list.

“It took three-or four years to find traction in the market, we were worried about its reception in the supermarket,” Roger continued. “Every brewer gets those unhappy Monday morning emails, ‘I bought your beer and found bits in it,’ but for every one of those there’s thousands of other happy drinkers.”

The challenge, he added, is once your beer is selling well and you’re on double-shifts at the brewery, how do you find time to filter and re-seed it? So Roger experimented with unfiltered beer instead, and luckily the yeast in Proper Job settled really tightly, yielding an excellent result. So after a visit to Marston’s to see what they were doing, he designed a set-up that blends yeast and beer in controlled amounts as it goes to the bottle-filler.

“We put quite a bit of automation around it, I thought it was unique,” he laughed. “Then I visited Westmalle, I’m looking at the bottling line – and there’s their yeast tank the same as I'd designed! So we brewers find the same solutions to the same problems.”

Ageing in cask – and in cans

But to come back to the original question, is bottle-conditioned beer definitively different from real ale? Well, yes – if you take today’s real ales as your examples. But historically, probably not because in the past any vessel could potentially be used to age beer. In the old days, stock ales were aged in wooden casks, often in the brewery yard. While it’s rare to age cask beers these days, it is sometimes done, and I’d argue the difference is as much to do with expectations as anything else – we expect cask ale to be fresh, not aged.

And cask-ageing is making a comeback – if, like some commentators, you regard cans as tiny kegs or casks… One of the pioneers here is Justin Hawke of Moor Beer, whose canned beers were the first to be accredited by CAMRA as real ale – that is, they contain live yeast, and the beer continues to develop (condition or referment) in the can.

“We had to work with the manufacturer on can-conditioning,” he said. “It was a bit crazy! We measure the sugar and yeast content in our lab, then we literally package the same beer into can and keg.” Justin added that refermentation makes the beer more stable, such that “unfined casks will keep for ages.”

He continued, “We go through a full refermentation, we crash-cool the beer pretty much to freezing to settle it out, then we warm it up in special temperature-controlled areas to get that refermentation to happen. It’s at least three weeks, some beers are longer – it’s a massive cost because we’re sitting on beer for an extended period, but it gives that evolution of flavour. My friends who brew tank beer will get the perfectly-fresh hop aroma that we will not get – our yeast interacts with the hops and changes the flavour. It gives a much more rounded mouth, you lose a little flavour but gain depth and shelf life and stability.”

One thing is for sure – whatever the motivation, the popularity of bottle-conditioned beer shows no sign of abating. Jeff Evans, formerly editor of CAMRA’s Good Beer Guide, and more recently of the Good Bottled Beer Guide, pointed out that “at the founding of CAMRA, only five bottle-conditioned beers were known to be in regular production,” a decline which he argued had been driven in part by better bottling technology which made it possible to give people the clearer beer they wanted.

It can hardly be a coincidence that the number started growing again as CAMRA first introduced a BC category into its competitions, and then began listing BC beers in the Good Beer Guide. By the time the listing was spun off as the Good Bottled Beer Guide the number was well over 100, and by the most recent edition it was a shade under 2000.

Producing a new edition would be a daunting prospect. It would need to consider over 3000 from the UK, said Jeff, plus more from abroad, where some brewers have long preferred the softer texture of unfiltered live beer.

Would it be worthwhile – do people still seek it BC beer out, I wonder? Or it is a case of it’s expected or assumed that some will be BC? Let us know in the comments below… Happy New Year!
at 5:45 pm