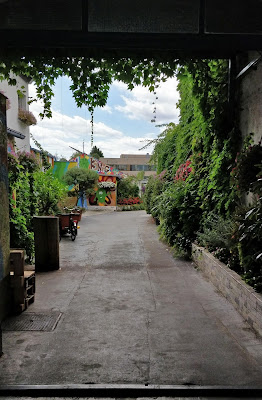 Fortunately I’d been recommended to one that didn’t, namely the local branch of Die Bierothek, a group of craft beer shops. Again it was somewhere new to me – or at least I’m pretty sure it wasn’t there seven years ago, as I’d have walked past it on my evening perambulations between our rented apartment and Brauerei Spezial.

I find myself in two minds about craft beer shops. On the one hand, everything costs more – there’s classic Franconian beers in this one at €2 or €3 a bottle, but which I’d picked up the day before for €1 to €1.50 at a supermarket on the Memmelsdorf road. On the other, they have beers that I doubt you’d find anywhere else in the area – even some of the rural Franconian stuff probably doesn’t normally travel into the city. So I picked up a few cans – and once you’re into the €6/can area the additional margin is minimal anyhow – and made way for other shoppers. 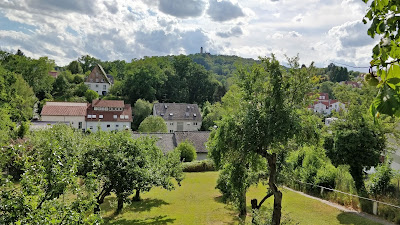 The last was a bit more of a struggle, but worth it – the long haul up Kaulberg to Brauerei Griefenklau. It’s another favourite venue, and I was just early enough to get half a table at the end of the biergarten, overlooking the gardens below and with this green and leafy view across to Die Altenburg on the hill opposite. A lovely place to sit and sip a Zwicklbier as dusk began to creep in.
at 10:00 am