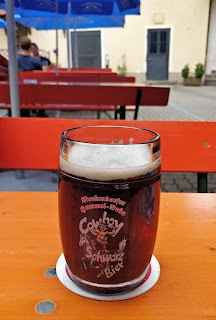 But it had a bit of greenery around, including a large shady tree, a play area which the kids loved, and the food and beer were hearty and – with one exception – excellent. I had the pork belly, roasty, salty, chewy and delicious, accompanied first by a classic hoppy-bitter and faintly toasty Kellerbier and then by Räucherla, their lovely smoky Rauch-Märzen. My one disappointment was ending with their Cowboy Schwarzbier – so sweet and gassy that I couldn’t finish it. Still, the brewery ‘shop’ was open, they’d sold out of the Rauchfestbier but we have Pils, Märzen and Festbier-Hell to try later – I’m sure they will make up for it!
at 11:11 pm