Hoppy days down on the farm

The 2022 hop harvest begins this week – or at least it does in the Weald of Kent, where Hukins Hops grows East Kent Goldings, Fuggles, Challenger, Ernest, Bullion and other varieties – and where they invited a small group of beer writers and friends to be the guinea-pigs for a trial tour ahead of their first-ever Pick Your Own Hops event. Hukins Hops is a 50-acre family farm that’s been growing hops since 1900, although it was relatively recently that current boss Ross Hukins made the decision to focus entirely on hops. As well as dried and pelleted hops for both commercial and home brewers, they also sell fresh and dried hop garlands for decorative use. And this week they will also have brewers coming by to pick up the first fresh wet or green hops, which they typically aim to get into beer within 24 hours in order to capture as much as possible of the fresh hop character. There’s several Green Hop Beer festivals coming up, the biggest being in Canterbury in September. One of the first things I noticed when we started walking through the hop fields was how quiet it was – our well-informed tour guide Dom, from UK Brewery Tours, said it’s like this for much of the year. Obviously the days of manual harvesting, when Londoners in their thousands would travel to Kent for a few weeks hop-picking, are long gone and it’s largely mechanised now, but it’s also that outside harvest and a few other activities, there is not so much to do.

Then, once harvest starts, there’s several weeks of hectic activity before it quietens down again. One reason for growing several varieties of hops is that they ripen at slightly different times – for example Fuggles is first, then Challenger, followed by Ernest and Bullion, then UK Cascade, and so on – which smooths the harvesting and processing out a bit, but it is still pretty concentrated.

The next thing I noticed was how they grow. The overhead poles and wires are still there, not so different from 100 years ago, then each of the 320,000 plants on the farm has its own metal ground anchor from which compostable strings run up to the overhead wires. Most plants have four strings for four twisting shoots or ‘bines’, and Dom said that some varieties will grow up the strings naturally while others need training – twisting the shoots around the strings to encourage them to climb.

As well as differences in smell and taste, hop varieties also look slightly different on the bine – even before you notice the one in 200 oddities on the farm that are the male hop plants. Challenger cones are longer than Fuggles, for instance, and some kinds are bushier than others – although all were a little thin this year, due to the dry weather. Indeed, this year's hop harvest looks set to be down right across Europe, with Germany predicting a 20% drop.

But climate change is impacting hop-growing in other ways too. For instance, Dom says that traditional English Goldings and Fuggles now need irrigation, whereas the newer varieties are more tolerant.

This adds yet more layers of complexity to the decision of what varieties to grow. Not only must the farmer try to anticipate the upcoming hop fashions, but they also need to think about what suits their terroir, what’ll incur extra costs and so on. Hukins is growing some experimental varieties but it takes three years for the character of a new variety to become clear, and while hops are perennial, the bines need replacing after about 30 years. If you get it wrong, as Hukins did a few years ago with Bramling Cross which didn’t sell, you have to grub out the plants and replace them.

Anyway, come harvest the whole bine is cut at top and bottom, which only needs two workers on a tractor with a high ‘cherry-picker’ platform on the front. The cut bines go onto a trailer, string and all, and are trucked to a gigantic stripping machine. This separates the vital hop cones from everything else, all of which can go for compost, including the strings.

Although it’s housed in a modern building, Hukins’ stripper is more than half a century old! Sure, a modern computer-controlled one might be faster and quieter. But not only was it significantly cheaper to buy a vintage machine second-hand, it also means most problems can be fixed by a mechanic, without the need to call in a service engineer.

Barring the small proportion that goes out green, as garlands or is sent off to be turned into hop pellets, the rest of an average year’s 50 tons of hops goes into the three huge driers – diesel-fuelled, sadly, unlike the rest of the farm which is solar-powered. Several hours at 57ºC drop the moisture content right down, leaving the dried hops ready for packing. 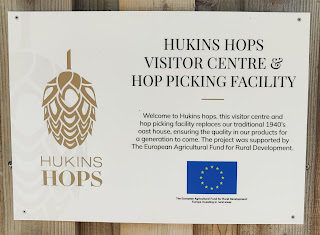 Last on the tour, but far from least, was of course to taste the results. Dom presented us with samples of three different beers, each one made with a specific hop variety from the farm. The two stand-outs were a dank and rich-bodied bitter using Challenger and a smooth, coffee-tinged and herbal-hoppy London Porter made with East Kent Goldings (this turned out to be Five Points’ excellent Railway Porter).

And with that, it was time to say thanks and goodbye. At first sight, Hukins Hops doesn’t look the easiest of places to get to (it’s an hour by train out of London Bridge, then a taxi) and the tour does involve quite a lot of walking over uneven ground, but it’s fascinating. But if you can drive you can make a day of it, as there's other places to visit in the area. Old Dairy Brewery (a Hukins customer) is not far and there's vineyards around as well, including several smaller ones alongside better-known ones such as Biddenden and Chapel Down.