The Ram Brewery, Sambrooks and the secrets of ancient brewing

It's been a busy week. It started with my first visit to the new Sambrooks Brewery, which is inside the old Young's Ram Brewery site. Much of the production brewery is out of sight in what was once a tun room full of porter tuns, and then later - if I remember rightly - Young's cask washing area. But there are also several vessels visible inside Sambrooks grand new taproom, which occupies two floors and has huge picture windows overlooking the plaza and beer garden outside.

The first reason to be here - apart from sampling Sambrooks' new and rather tasty session IPA, Sidekick, and its brand-new and excellent Oatmeal Stout - was a presentation from fellow Beer Writers Guild member Tim O'Rourke, on his research into surviving ancient brewing traditions, including meeting and in some cases brewing with traditional brewers.

It really was fascinating for anyone into brewing history. He went through brewing traditions from all over the world, including the maize beers of Central and South America, millet, sorghum and banana beers from various parts of Africa, the Sake-like rice brews of Southeast Asia, and more. He then linked them to historical, archaeological and artistic evidence of ancient brewing.

The two things that stood out for me were first, you know that story about women chewing the maize to make Chicha? It's a wind-up, a hoax, and one that generations of beer writers have eagerly swallowed - more eagerly than the Chicha, probably! Of course, if you think just how much grain is required for brewing, and how dry the special brewing maize is, you would not want to do anything other than mill or grind it - but chewing made for a more picturesque story, I guess...

And the other was when Tim reminded us that, although every human culture has had alcoholic drinks of some sort, there's a big difference between beer and the likes of wine and cider which is that, despite the wishful thinking of some archaeologists and others, beer does not happen spontaneously. Fruit will ferment, and sometimes animals get drunk on it, but a bucket of wet grain will simply rot and go mouldy.

The difference is that beer requires processing. Typically this means malting, which converts the starches to fermentable sugars, with the milled or ground malt then mashed in warm or hot water to extract those sugars. And this is almost certainly why burnt grains turn up in certain archaeological features, which were formerly assumed to be something to do with baking or cooking, but are now increasingly recognised as malting sites. Indeed, there's a growing understanding or recognition among archaeologists and historians that it was as much beer brewing as bread baking that encouraged humans to settle down and become farmers rather than hunter-gatherers.

After the talk - and quite a bit of discussion among the beer historians present - I was fortunate enough to join a group touring both the old and new breweries. Our tour was led by John Hatch who, after working for Young's, was the one who kept the site's brewing tradition alive for several years while it was awaiting redevelopment, The consequence of his stalwart efforts is that the Ram Quarter retains its crown as the country's oldest verified brewery or brewing site. (It's not the country's oldest brewer - that's Shepherd Neame.)

His nano-brewery, built around a repurposed tea-urn, is still in use as a test brewkit for Sambrooks, although of course the old laboratory building that housed it and his little bar when last I visited, several years ago, has long gone. As well as seeing parts of the new Sambrooks Brewery, which moved here from a much larger site in nearby Battersea*, we also got to see parts of the old Ram Brewery which are now a brewing museum. These included the gleaming old coppers, an ancient well, and lots of breweriana. 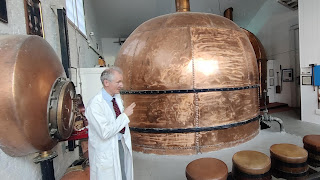 Amongst the latter were photos of both the late Queen Mother and a youthful-looking Prince Charles pulling pints of Young's. Needless to say, she looked a lot happier and 'into' the task than he did. In fact, he looked downright nervous - here's hoping he has had a bit more practice since then, especially since he has his own Duchy beer range now.

After the tour it was back to the taproom for the Beer Writers Guild party, with pizza and more beers, both from Sambrooks and from various generous corporate Guild members, including among others the aforementioned Shepherd Neame, Timothy Taylor with Landlord and its fruity pale Hopical Storm, Salcombe showing its new Atlas SIPA, Krombacher UK with the eponymous classic Pils, and Hogs Back with its gorgeous but dangerous A Over T barleywine.

My thanks to all of them - and yes, a good time was had by all!

*I understand that the old Sambrooks brewkit went to SEB (South East Bottling) in Broadstairs. Rumour has it some Sambrooks beers are now brewed there under contract.