So last week I took the train out to the Egham Real Ale and Cider Festival - this was as good as ever, with lots of wonderful beers on offer, including many many dark beers that I'd have liked to try but simply couldn't fit in. This time though it had the added attraction of a free beer sampling in the corner from a new brewery I'd not come across before: Weird Beard. 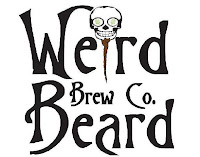 Its founders Greg Irwin and Bryan Spooner are active members of London Amateur Brewers, and they were dispensing samples of some of their prototype beers. They had brought 36 bottles along but had already been there for two hours by the time I arrived, so there wasn't a lot left! The one I did get to try - Decadence Stout - was rather good, though Greg said this batch had turned out a bit fruitier than he planned, due to a change of yeast.

They had planned to set up shop in a railway arch in Harrow, but due to TfL's Byzantine bureaucracy they have instead decamped to an industrial unit in Hanwell, not too far from Boston Manor Park. Greg said they're looking for a 10 barrel plant which will be shared with another LAB member who's going pro, Mike Ellenberg of Ellenberg's Brewery.

The plan is to produce a core range of four American-style craft ales, mostly bottled but with around 20% going in cask and a smaller proportion into keg. (Meanwile, Ellenberg's intends to produce specialist bottle conditioned beers such as Altbier, smoked wheat beer, black ale and stout.) Greg said the main target is central London, where craft beer is increasingly hip. If you want to catch up with them, that's where your next opportunity is - at the London Beer Festival on 19th-22nd April at the Strongroom Bar in Shoreditch.