One of the experiments at this weekend's European Beer Bloggers Conference was speed tasting, or speed blogging. The idea was like speed dating: we'd get ten beers brought around, each one by the brewer or someone from the brewery, and then we'd have just five minutes for them to introduce themselves and the beer, and for us to taste and write about it.

It was a bit of a blur – maybe ten was too many beers, or maybe we needed ten minutes with each – but was good fun and it's an exercise that I reckon beer clubs or even beer festivals could easily copy or adapt.

For the brewer it makes you focus on your "elevator pitch", while for the tasters it makes you think fast; the only possible downside is you might find yourself focusing too much on the aroma and the initial flavours, and not enough on the longer body and finish of the beer.

Anyway, here's the beers, plus my notes which were either live-blogged into RateBeer or Untappd, or in some cases simply scribbled into my notebook...

2. Innis & Gunn Scottish Pale Ale (7%)
Bottle. A new version of these by now well-known barrel-aged beers, this one was aged in a Bourbon cask and is currently only on sale in Sweden. It's lightly floral and a bit sweeter than the other I&G beers I've tried. 14/20

3. Leeds Hellfire (5.2%)
Bottle, pale light bitter, citrus nose, quite bitter at first, medium bodied, not complex in flavour. Designed to be drinkable from the bottle as well as a glass. (I suspect I'm not exactly in the target market for this one!) 13/20 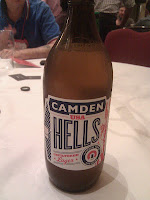 4. Camden Town Hells (4.6%)
Bottle. A German-style helles but with the German hops swapped for American ones. Banana & grapefruit nose, like a fruity IPA, cloudy gold and quite gassy – and tasty. (I went back for seconds afterwards!) 14/20

5. Otley Oxymoron (5.5%)
Cask decanted into minikeg. Lots of piney hops on the nose, smoother body than some black IPAs. Six hops used. A little liquorice and treacle in the mouth. burnt bitter and a touch of choc in the finish. Hops overpower the malt somewhat. (I've had better Oxymoron before, but it's also not the best black IPA I've had (that's Windsor & Eton Conqueror 1075, then Thornbridge Raven.) 13/20

6. Marble Brewery/Emelisse Collaboration Earl Grey IPA (6.8%)
Bottle. Steeped with 3kg of tea, plus plus Citra hops. Deep gold and slightly hazy, with a big citrus and pine IPA nose. The body is hoppy at first but then smooths out, with hints of pineapple and a faint tannic tea note coming through in the finish. 15/20

7. Roosters Baby Faced Assassin (6.1%)
Cask & decanted into a jug, deep gold, dank piney nose, nice balance of sweet malt vs hops, hints of peach and mandarin and a little melon, smooth, full bodied. Good stuff. (Apparently this was a single-hop special edition one-off just for this event – that might be cheating a bit, but it was nice!!) 15/20

8. Great Heck Stormin Norman (6.5%)
Cask & decanted into a jug, dark gold/light amber with a coarse but clingy white head, fruity nose with pine hints, but then the body is surprisingly light for the ABV. Rather one-dimensional with an astringent acrid finish. Not very well balanced. 11/20 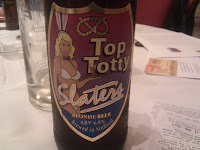 9. Slaters Top Totty (4%)
Bottle, gold with relatively high carbonation, grassy hops on the nose, crisp and wheaty (there is a portion of wheat in the grist), a little peppery hop, dry, light. Like a lager/ale cross. A nice summery beer. (This one I prefer in cask, though.) 12/20

10. Brains Dark (4.1%)
Bottle. A nice mild but it's better on cask in my experience, even though the bottled version has a higher ABV. It also may have suffered a little from coming to our table after a couple of hop-monsters... 12/20

I'm pretty sure I've got the above in the wrong order, but then I was live blogging in three different places If one of the others on my table posts the list in the right order, I will come back and correct mine. (-:
at 11:10 am