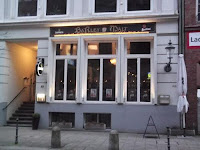 Anyway, if you're in Hamburg and looking for something beyond than the regulation North German Pils, then Barley & Malt is well worth a try. There's food on offer too – bar snacks, plus pizzas and their even tastier tomato-less German cousins, Flammkuchen.Yum yum!
at 9:31 pm