Today (Friday) was the opening day – or late afternoon at least, as it didn't start until 4pm – of the first Hannover Bier Fest. We were promised an international line-up, which is still something of a novelty in a country where many people believe foreign beer isn't worth drinking, served from stalls in the old market square – as with their beer gardens, Germans love doing stuff al fresco.

In hindsight, deciding to drive down on Friday afternoon might have been a mistake, given that it's a holiday weekend here and half the bloody country seemed to be on the road. We hoped to be in the city well before 3 but didn't actually arrive until 4, so missed the official opening, if indeed there was one. 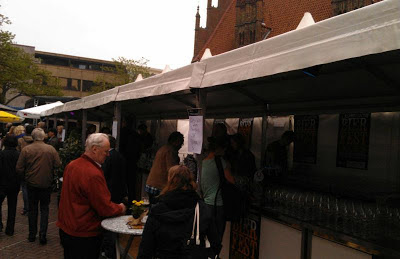 So things were well under way, with many of the tables filling up, by the time I took a tour around to see what was on offer. The answer was, as I had suspected, many of the "usual suspects" – plenty of nationally-distributed German brands, such as Lausitzer Porter, König Ludwig, Erdinger and Krombacher, plus the local Hannover breweries and the big AB-InBev names, including Franziskaner, Löwenbräu, Spaten and of course Becks. Many of these were on what was claimed as the longest bar in Northern Germany, with 40 taps in 30 metres (above). Prices varied from €2.50 to €4 for a 25cl measure - not cheap.

Where it started to get interesting was rarer names such as Zischke and Allerheim, plus some of the new wave of internationally-inspired young brewers, notably Propeller and FritzAle.

The foreign country with the widest range was Belgium. However, as well as Kwak, Delerium Tremens, Grimbergen and Tongerlo on tap, this also included AB-InBev pap such as Stella and the yucky (well, the boy liked it, but he's 2 and also likes chocolate milk) Hoegaarden Rosé.

Actually, looking at it again there were probably as many British beers present as Belgian, but the organisers broke those up into England, which was mostly Fullers (though Boddies and Newky Brown were also listed) and Scotland, represented by a certain bunch of canines... Actually, given enough time I would have visited the latter tent, badged as Brewdog & Friends, as it was also supposedly serving Harviestoun Ola Dubh, Boruvka Cerna Hora from Czechia, and Sierra Nevada. The latter's Pale Ale is remarkably popular here, by the way: I guess it is a perfect stepping stone for a Pilsner drinker who wants to expand their flavour horizons.

Sadly I didn't have time to check out the African tent properly either, to see if the South African, Tanzanian, Kenyan, Namibian and Ghanaian beers listed in the programme were anything more than generic international lagers. (I did spot a couple of groups necking Castle from the bottle, and that's pretty generic in my book.)

Where we sat was opposite the Chilean bar, though – and just up from the cheese stall, which had an excellent range of potent delicacies. All around were young Germans, again necking from the bottle, but this time it was varied non-lager from a microbrewery in Chile – and yes it was the real thing, not a licensed copy made in Europe like some of the 'African' beer.

There was also good live music, with more promised, plus of course a choice of eats, including sausages, grill-kebabs and filled crêpes. It would have been nice to stay longer, but we were already a bit frazzled from the drive down and my designated driver was not looking forward to a repeat experience on the way back. Plus the Chileans were happy to sell me a couple of takeaways for later...

I'm going to try scanning the programme and dropping it in below for anyone who's thinking of going along – the festival is open from noon on Saturday and from 11 on Sunday. The programme includes a reasonably accurate beer list, which the festival website does not.