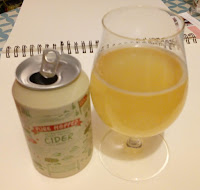 Would I try it again? Sure – it’s an intriguing mix and a nice cider, even if I normally prefer my ciders a little drier than this. It does make me wonder what a proper dry scrumpy would be like when dry-hopped, though!
at 4:32 pm

Email ThisBlogThis!Share to TwitterShare to FacebookShare to Pinterest
Labels: cider