Late last summer I discovered that the Tate Modern – the ex-power station that’s now an art gallery on London’s South Bank – not only has a new extension with a bar in it, but that bar is bidding to become a craft beer destination, with a monthly series of tap take-overs where it hosts modern British brewers. 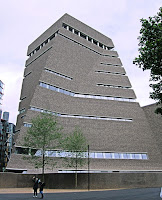 Opened last June, the new extension is called the Switch House and looks like a tapering yet twisted tower. Apparently there was a bit of controversy over the design... The bar, on the ground floor – or at least, on the entrance level, which is not the same thing – is long and sort of L-shaped. It is also not cheap (330ml bottles & cans average £6, the new price-point for up-market venues), so the £10 tickets for the tap take-overs, where you can taste five of a brewery’s beers and also hear the brewer speak, are pretty decent value – especially given that you get a third of a pint of each beer, and the line-up typically includes a rarity or two.

On the downside, I’m told we are not likely to see cask beer at the Terrace Bar any time soon, as the ‘cellar’ is too far away, plus there isn’t enough free space on the bar-back to put a cask there on gravity. There’s two clusters of keg taps though, serving half a dozen beers plus what looks to be a triad of draught house wines, plus fridges with a decent collection of bottles and cans. The latter has a London focus, eg. Fourpure (which also brews the house beer, Switch House Pale Ale), Orbit, Kernel and Partizan.

I was over there a couple of months back for a tap take-over by Wild Beer, which I'll write about once I get my notes sorted out.
at 3:42 pm