Earlier this year I went to a conference in Boulder, Colorado. Much as I like Boulder itself, this meant flying into Denver, and it’s been many years since I explored that city’s beery pleasures. So I arranged to travel out a couple of days early and have most of a weekend in Denver. Rather than stay in the centre or south, where I’d been before, I decided to explore the northern side of town, more specifically the up-and-coming arty area of RiNo, or River North.

Five or ten years ago, I don't think there wasn't much reason for most people to visit this part of northern Denver – especially not after dark! Flat, dusty and sun-baked, like much of the south-western US, it was an area of railway sidings, light industrial units and warehouses. There were local residents, but mainly poorer ones.

With time, that included artists and hippies as they were priced out of other areas, and following them came the hipsters and the semi-curse of arty areas everywhere – gentrification. I say semi-curse because while it's driving property prices up and by the look of it pushing industry out, it's pulling in infrastructure investment – I haven't seen so many building sites and roadworks in ages.

And of course what infrastructure expansion is complete these days without a craft brewery or brewpub? One RiNo brewer said from almost nothing four years ago, he now has 13 other breweries within a mile, and I can well believe it. There's even more downtown, of course, but that's more like two miles away and they've been there rather longer - since 1988 in the case of Wynkoop, Colorado's first brewpub and craft brewery.

RiNo had the advantage for me of being on the train line from the airport to the main station, so with a bit of planning (and a 3-UK SIM card for free roaming data in case I needed to re-check the map) I could get off a couple of stops early and walk to the room I’d booked through AirBnB.  On my walk I heard cheerful noises and spotted Black Shirt, one of the local brewpubs. So after dropping off my bag, I headed back there.

It’s a friendly place, with modern art for sale on the walls and a crowd that seemed more grunge and arty-local than hipster. The beer was the usual ‘craft’ mixture of styles – a very nice Saison alongside assorted IPAs, a Porter, a Stout and of course something barrel-aged, in this case a sour ale aged in bourbon barrels. Most were rather good, even the inevitable Kölsch, a style that’s everywhere now and has emerged as a gateway beer, not just for lager drinkers exploring ale but for ale brewers looking for an easy way to produce something lagery.

Waking the following morning, I made coffee and started planning my afternoon. Epic Brewing's tap-room was in the right direction and opened earlier than some of the others, so that was my first target. Walking in, it was clear that a lot of money had been spent here – a theme that was to flow through the afternoon. After a couple of excellent beers chosen from the dozen-plus taps serving the clean and airy bar area, it was time for their first guided brewery tour of the day.

It turns out this isn’t the original Epic – it’s an offshoot of a Utah brewery, which opened a Denver branch in 2013 to get around Utah’s strict alcohol laws. For example, in Colorado you can sell packaged beer direct from the brewery.

When it opened in an old high-roofed auto workshop, Epic was one of the first in the area; it’s now 50% bigger than its parent and while its brewlength is still a ‘micro’ 20 barrels, they’re brewing 24 hours a day, five days a week, and its array of fermenting vessels (FVs) includes ones holding 120 and 180 barrels. These are for the biggest sellers, needless to say. Having as many as nine brews go into one FV also helps with consistency, as it smooths out batch variation.

Like most micros Epic also does barrel-ageing, but unlike most they have foeders too – tall wooden vessels that tower over the bar area. They do some kegging and bottling, but most of the beer that goes offsite is canned on an automated microcanning line. Sadly, while they do export to a few countries, none of them’s this side of the Atlantic.

By now it was starting to get a whole lot busier, and the food truck had opened for lunch – Colorado might be relatively relaxed about brewing and selling beer, but apparently it’s a pain getting the permits to sell hot food as well. So most brewery taps and brewpubs skirt around it by inviting mobile canteens to park up outside and then allowing patrons to bring their food inside.

It was the same at my next stop, Ratio Beerworks, a brewpub where the Texas BBQ truck served up a paper plate of excellent pulled pork for just a few dollars. Ratio was an odd one otherwise – all the beers were well made and tasty, yet somehow it felt like there wasn’t any great inspiration and it was trying just a bit too hard to be fashionable. Then again, while its ‘industrial chic’ concrete and sheet-steel styling would be pretty drab in another climate, in the Colorado sunshine it worked pretty well. The terrace in particular was cheerful and bustling with groups of friends, most with lunch in mind and several with dogs in tow.

Our Mutual Friend was a bit of a shock at first. After the airiness of Epic and the sunny terrace at Ratio, it seemed, well, gloomy! Before long though I came to welcome the cool shade inside what felt almost like someone’s front parlour, albeit a very large one. Beyond the bar, I could see into the space behind where the 7-barrel brewkit lives, and above the bar was an eclectic list of beers – a few of the craft-standards you see almost everywhere now, such as IPA and Saison, but also a Mild, a Winter Warmer (in the Colorado summer?!?) and a Smoked Pumpkin Ale – I assume it was the malt that was smoked, not the pumpkin, but you never know. 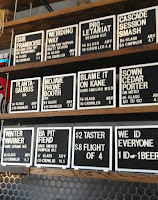 The OMF beers were more variable – the Smoked Pumpkin and the Raspberry Sour were excellent, for example, but the Mild was a bit odd – notes of toasted fruit and rye bread don’t say Mild to me. I liked the place though, and would have stayed longer, if not for the jetlag catching up. It was time for a siesta, before the evening part of the crawl….
at 2:22 pm