Where's Waldo? Down the pub 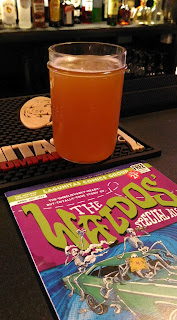 It's 4.20pm on April 20th – 4/20 in American parlance – and Lagunitas Brewery market manager Finny is in London for the 2018 launch of Waldo's Special Ale, one of the brewery's annual one-offs. "Happy 4:20!" he announces merrily, before taking a mouthful of the beer and launching into its origin story.


Finny – real name Andrew Finsness, but known to all by his nickname – clearly loves telling a story. This one is the 1971 tale of five high school students, who called themselves the Waldos because their favoured hang-out was by the school wall. They had acquired a 'treasure map' which would allegedly lead them to an abandoned marijuana plantation, and they agreed to meet at 4.20pm each day after school to go and look for it.

The way the story goes, they never found it, but somehow "4:20" entered the counter-culture as a term for smoking a joint. Then 40 years later, the founders of Lagunitas – who knew the term well – made a connection. Hops and marijuana are closely related plants, so with richly herbaceous and hop-forward ('dank') beers in vogue, they got in touch with the Waldos and invited them to come and help brew a beer that would both celebrate the 420 legend and that herbal sub-culture.

The result is a triple IPA – triple in this sense means above about 10% alcohol, says Finny – that is brewed just once a year. That might not sound much, but the brew length at Lagunitas is 250 US barrels, which is a shade under 30,000 litres, and most of its fermenters take three brews, so a single batch is almost 90,000 litres or a quarter of a million bottles.

The beer varies a little from year to year in terms of alcohol strength (it's 11.3% this year) and the exact mix of hops, but regardless of that, it is the hoppiest and dankest beer that the brewery produces. And what a brew it is – rich and flavoursome, very bitter, yet well balanced because of its smooth and dank texture.

It's also the first time that it had officially crossed the Atlantic, with April 20th launch events in several European cities. This, as Finny and his colleagues acknowledge, is one of the welcome results of Heineken's 2017 takeover of Lagunitas – it's now the craft flagship of the Heineken empire family, and has the Dutch giant's marketing and distribution muscle behind it.

Indeed, apart from a growing confidence and ambition, it is hard to tell that much has changed at Lagunitas since the acquisition – the playful, charitable and iconoclastic family feel is still in evidence. One has to hope that this will last.
at 10:24 pm