Can Tottenham become the new Bermondsey?

There's now at least seven breweries around the Tottenham area of north London, which if I remember rightly is more than there were on the original Bermondsey Beer Mile. So when I heard that the local CAMRA branch there was organising its "4th Annual Tottenham Real Ale Revival Crawl" last Saturday, I was intrigued – was Tottenham becoming the new Bermondsey? And for real ale?! 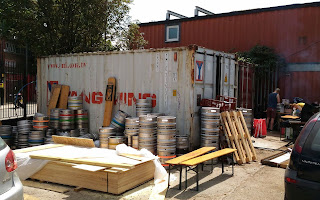 Well, not quite. For a start, Redemption doesn't have a brewery bar open on Saturdays, and One Mile End doesn't even have room for a brewery taproom, or so I'm told. Still, a five-brewery crawl is not to be sniffed at!

Our designated starting point was Five Miles, which is also the home of Hale Brewing. The brewery is housed in two shipping containers in the yard (left) and uses the former Affinity brewkit, Affinity having upgraded and moved to, yes, Bermondsey. As well as being the brewery tap with four Hale beers on tap, Five Miles is a beer bar in its own right – among the others on tap (below) during on our visit were beers from Magic Rock, Mikkeller (Denmark), Oedipus (Netherlands) and Schremser (Germany). 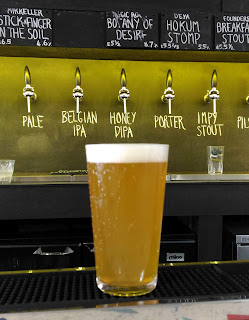 What there wasn't was any cask ale – or at least, nothing on handpump. This was to be a feature of the whole crawl, although of course some of the draught beers we encountered may very well have been keg-conditioned real ale. You might think this a bit odd for a CAMRA event, but I assure you it's not – not for London CAMRA, anyway. I think we're a pretty open bunch on average – good beer is good beer, although being cask or keg-conditioned generally makes it better still!

Anyhow, the Hale beers I tried – a fruited Berliner Weisse called Tropipisch and a fruity-hoppy pale ale – were pretty decent, and the bar is nice too. It's a little out of the way, mixed in among industrial units some 15 minutes walk from Seven Sisters tube, but that too as we'll see was to be a feature of the afternoon…

Because it was another 15-20 minutes walk to our next destination, Beavertown, which is also mixed in amongst industrial units. This of course is the keystone brewery for the area, and was correspondingly crowded. It's cards-only at the bar and the queue can be pretty long, but once you get there, then as well as Beavertown's own excellent products there's usually at least a couple of collaboration brews. On our visit they had on tap both the De la Senne collab Brattish, and the stonking 14.5% Heavy Lord quadruple stout brewed with Three Floyds. 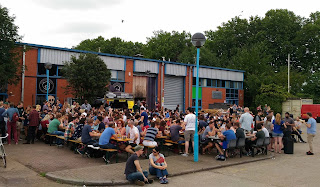 It's a nice place with a friendly crowd and great beer, helped by the early afternoon sunshine. I was happy enough though to move away from the throng (left), especially as we were only going around the corner on the same industrial estate – our next destination was Pressure Drop which recently moved in from Hackney (as an aside, it's just agreed to reopen its old brewery site there as a joint taproom with Verdant).

Pressure Drop's unit is less crowded – for now! – and feels more relaxed. Its beer range is well crafted but isn't as envelope-pushing or as broad as Beavertown's. Somewhat stereotypically for craft beer, there were several IPAs available, for instance, including multiple examples of New England IPA. To be fair though, the two NEIPAs I tried were notably different from each other. 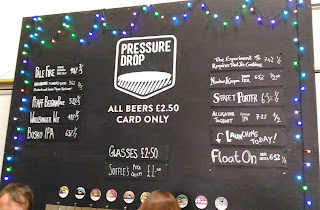 A neat move on Pressure Drop's part is that the bottle bar is also where you get your glass deposit refunded, and you get the option of swapping it instead for a bottle – there's several beers here that aren't on the main draught bar.

From here it was on again, with the realisation of just how amazingly many small industrial estates there are in this part of London. That's because I and another chap, having been left behind by the main party, headed in the right direction up what looked like a road, only to discover it was actually the entrance to a small estate – and it was the only entrance. So we ended up having to walk more or less in a complete circle to get out again, and then backtrack to find a parallel proper route. Sigh. 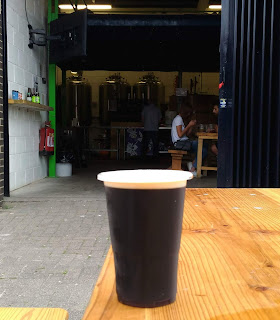 Still, and few twists and turns, and a walk through a rather nice semi-wild green space, and we found ourselves entering yet another nondescript small industrial estate. Luckily I recognised the logo on one of the buildings as that of Brewheadz, our next destination, and yes, there were a couple of long tables outside. Apart from our group, it was pretty quiet – one member of staff and a handful of customers. It's a bit off the beaten track, I fear!

Brewheadz is operated by Italians, and its beers are eclectic – some classics such as their IPAs and Pales, and a medal-winning Porter, a series of fruited sours and a few outliers such as Attila the Nun, a Tiramisu white stout. I tried tart-sweet Drowning Mango, a slightly thin fruited sour that also has yogurt in(!), although I couldn't detect it, and Pineapple Wannabe, a pina colada porter which worked surprisingly well (left).

What do you mean, you lost the Czech?

Then it was off to the fifth and final destination: the Czech-inspired and operated Bohem Brewery which was having the opening party for its brewery taproom. I was lagging a bit again, and while the others sought a bus I decided to walk there with the aid of Mr Google and his map. The mistake, of course, was in letting the map guide me to where it thought the brewery was, instead of telling it the street address. Once again, I found myself walking a loop around a small, dead-end, industrial estate where everything was closed for the weekend. The brewery probably really was down at the end of it like the map claimed – just on the other side of that three metre high fence.

Still, I got there eventually. I subsequently learnt that although it looks to be in the middle of nowhere, on a dusty estate decorated with rotting old cars, this will change. It is very close both to the Redemption and One Mile End breweries, and to the site of the new Tottenham Hotspur soccer stadium. Indeed, I hear that there is a proposal for the three to open a joint brewery tap on match days, using the Bohem building as the others are more limited on space. 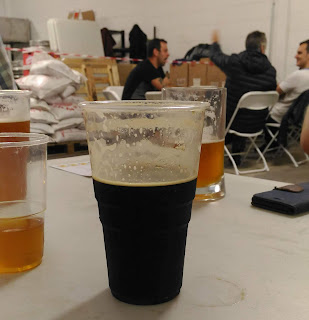 As promised, the Bohem beers are all Czech-inspired, with the possible exception of Druid (right), which began as a dry Stout before being converted to bottom-fermentation and becoming a sort of Baltic Stout-cum-Schwarzbier. I liked it a lot, but others weren't so sure, it being too burnt and ashy for them.

This being the final stop, and with the opening party being very much in full 'flow', we managed to get through every beer on the menu at least twice. Other than the Druid, my favourite was Vasco,  the 7.4% Double IPL – smooth, caramel-fruity and dry-bitter – followed by honey lager Henry, hopped-up Thor and amber lager Sparta. The 'only' two that didn't impress me were Victoria the session Pils, which lacked depth, and the Raleigh rauchbier which lacked, well, rauch!

All in all, a very pleasant way to spend an afternoon, and many thanks to Ian MacLaren of North London CAMRA for planning it. And it certainly wasn't his fault that getting home afterwards was a whole other adventure in itself, involving night buses and the night-tube – that was more to do with the magic never-emptying beer glass which meant I'd stayed slightly longer at Bohem than I'd expected to. Oops.
🤣
at 9:12 am