Watching the beer industry adjust to the reality of 2020 has been a mixture of fascination and horror. Seeing the production of cask beer crash has been terrifying – if there’s one thing I’ve really missed, it’s been good real ales, in a pub – yet on the other hand it feels as if the huge pivot to bottling and even more so to canning (“small pack” as it’s called) has brought increased beery diversity.

And even as breweries have struggled, and many have closed, others have opened – there’s even a new cask and can-focused micro opened this very month not far from me, which I plan to get to before long. 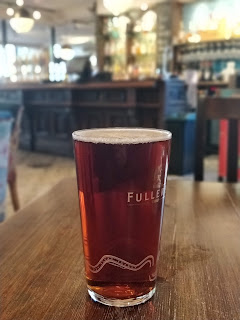 Best UK cask beer: without a doubt, it was when one of my locals got not one but three casks of Fuller’s 2020 Vintage Ale, and served them all in those few weeks of semi-freedom from October to November. Rich and malty, with notes of orange and Port, just thinking about it makes me angry again – all those Covid-safe pubs forced to close now, while no one does anything about the nose-bandits and other Covidiots inside supermarkets.

Best UK keg beer: I’m going to list Fierce’s gorgeous Big Chomp here as it was a crowler – a draught beer canned in a bar, in this case Brewdog Tower Hill. A 9% barrel-aged chocolate & caramel stout, it was one of a case I ordered when Brewdog switched to crowlers to save the 1000 kegs brewed for its Collabfest 2020. Afterwards, I wished I’d ordered the random pales case as well as the random dark – and perhaps two of each, they were that good!

Best UK bottled beer: Beer52 has been a good source for me this year, not monthly but bimonthly or so. I know some snobs don’t like it, but this year it has replaced previous errors such as licence(fake)-brewing an entire monthly case with popular and successful Cyberfest “online festival” cases, containing the likes of Harviestoun’s gorgeously boozy Old Engine Oil Engineer's Reserve, with its notes of toasted plums, chocolate and raisins. 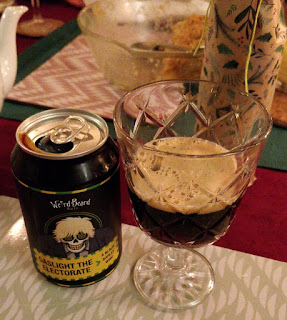 Best UK canned beer: labelled as a black Barleywine and sporting a label entirely appropriate for the times, it’s Weird Beard’s Gaslight the Electorate. Black and heavy, with notes of liquorice, tar, coffee and berries, and almost enough to help you forget living in a country governed by corrupt idiots and venal liars.

Best overseas draught: There’s not been so much this year, oddly enough. But back in January we had a rare evening out in Hamburg, ending up at top craft bar Alles Elbe, where they were hosting a “Meet the brewers” for new-wave cuckoo outfits Blech.Brut and Atelier der Braukünste. It was the former’s Vivid Dreams, a hazy 7.3% IPA, that topped the evening – lightly creamy and warming, and as vividly hoppy as its name might suggest.

Best overseas bottled: Another one from a Beer52 Cyberfest case, WRCLW Tonka, Vanilla and Chocolate Baltic Porter Nitro from Poland’s Browar Stu Mostów was rich and heavy, and stunningly good.

Best overseas canned: Bottles still dominated in many of the places I get my beer from, notably in Germany, so this was a tougher one to work out. In the end it’s a tie between two hazy Double IPAs, both from central Europe, more or less. One was another Beer52 offering, East Coast DIPA (8%) from Croatia’s The Garden, the other was Test Trace Isolate (9.5%) from Atelier der Braukünste, which I picked up on a brief but welcome visit to Bamberg.

Best collaboration: Who now remembers the other disasters occupying the headlines a year ago? Back in January, Pressure Drop hosted a fundraiser at its Tottenham brewery for Australian bushfire relief and we went along with the kids. It got pretty rammed as the afternoon went on, but the queues moved along, there was an Aussie barbie and Aussie cakes, and there were donated delicacies such as Pressure Drop / Left Handed Giant Escape Pod, a 10% Imperial milk stout, redolent of toasted coconut, dark chocolate and a fruity bitterness.

And on that wistful note of remembering “the before times”, I’m going to end. It’s almost midnight and timer to get this posted… Happy New Year, Frohes neues Jahr, godt nytår to you all, and here’s to a better 2021. Cheers!