The return of Allsopp's and the legend of IPA

If you’re at all interested in the history of beer, you will have seen the name Samuel Allsopp. the pioneering brewer and exporter of India Pale Ale. He and his sons built their Burton-on-Trent brewery into one of the largest in the world, before some unfortunate business decisions by Samuel’s grandson combined with a market slump to push it into receivership in 1911. 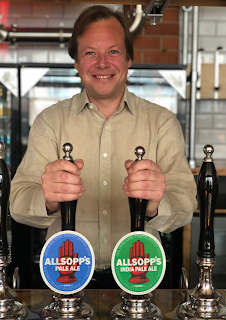 But now it’s back: one of Samuel’s descendants, Jamie Allsopp (left), has re-established the name and worked with Jim Appelbee, the former head brewer at Molson Coors’ William Worthington’s brewery in Burton-upon-Trent, to turn recipes from the only surviving Allsopp’s brewing ledger into beers for more modern ingredients and tastes. They’re starting with two, a Pale Ale and of course – how could they not! – a classic British IPA.

Jamie Allsopp has also reacquired some of the Allsopp’s trademarks, including the famous upright red hand, which had subsequently been taken over and used by first Ind Coope (which was 'Ind Coope & Allsopp' as late as 1953) and then Carlsberg. Most recently the mark had been bought by BrewDog, for a historical IPA project which as far as I can tell never bore fruit.

The family legacy was all around when he was growing up, Jamie says. “We had mirrors, and jugs, and ashtrays – there was Allsopp’s memorabilia on every table.” He adds that while for his father it was just family history, his grandfather had remembered the brewery business.

The old Allsopp’s brewery is long gone, of course, with a Carlsberg factory now on the site, so having located recipes he needed a brewery for them. He found one in Sheffield, some 50 miles from Burton, where Mark Simmonite had a 16-barrel plant originally built for another project. 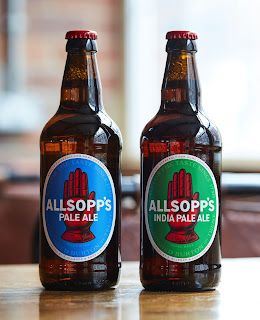 “The old records were specific enough that they could be interpreted,” Jamie says. “The IPA has not really changed, just a drop of ABV – it would have been more like 7% back then. Our Pale Ale is nothing like the 1700s, but it’s similar to later Pale Ales.” He notes that while the recipes have been modernised, both beers use a proportion of malted Chevallier barley, a heritage variety that dates back to the 1800s.

The result is two classic British-style beers – the Pale Ale (4.4% bottled, 4.0% in cask) is refreshing, malty and drying, with a slight earthy note, while the IPA (5.6% in bottle, 5.0% casked) is smooth and lightly sweet under a drying hoppy-woody topnote.

So what’s next for the revived Samuel Allsopp & Sons? The new website shows a Lager Beer, although it’s not on sale yet. Its 1897 purchase of an expensive lager brewing plant was one of the ill-timed decisions that helped crash the original Allsopp’s. The market wasn’t ready for Allsopp’s Lager back then,* although the redundant plant was later moved to Alloa and used to brew the predecessors of Skol lager.

Jamie also notes that before Napoleon closed off the European market to British brewers, and before the IPA trade opened up, the company was one of several shipping Porter to Russia. Then from the 1850s there was Allsopp’s Arctic Ale, originally 11% and brewed to accompany expeditions heading to, yes, the Arctic. Indeed, Jamie bought a bottle of a later Arctic Ale brew, the 9% 1875 version, at auction last year. Could a Porter, an Arctic Ale, or even a Russian Imperial Stout be next on the Allsopp’s menu? “Watch this space,” is all he’ll say.

The one question that remained for me was, given that Jamie is a wealthy Old Etonian ex-financier, is this more than just a rich man’s vanity project? Being able to self-fund certainly makes something like this far easier to do, yet at the same time Jamie’s deep affection for the Allsopp’s history is almost palpable, and it's clear that he genuinely wants to revive it.

In fact, it feels as if it’s something he has long wanted to do, but only now has the time and resources for. “I worked in finance for 20 years, but this was my lifetime ambition,” he smiles. “Selling pints – now I wake up every morning happy!”

*Curiously, there is already an Allsopps Lager in Kenya, named for where it's brewed, in the Nairobi suburb of Allsops.