Dryanuary is nearly over for another year, thank goodness*, but the low-alcohol and alcohol-free (AF) beer business continues to grow both in volume and quality. It’s also shifted focus, as I recently learnt from meeting several AF brewery reps at a tasting session organised by the Beer Writers Guild earlier this month.

The biggest change, according to Laura Willoughby, who runs the Club Soda pop-up AF shop where the tasting was hosted, is simply the range available. AF used to mean just lager or Weizen, but now there's ales, stouts, porters, even sours. More broadly there's also wines and drinks that mimic some of the character of gins and even whiskies. As she pointed out, "There's enough variety now for a whole off-licence, and if we'd had room we probably could have got another ten brands in!"

From a technical perspective, the biggest AF innovation is quite simply the dispense method – it used to be you’d only ever see AF beers in bottles or cans, but it’s increasingly common now to find them on tap. For example Heineken has a special tap for its 0.0% lager, Brewdog has been making a big feature of its AF products and last year ran what it claimed was the world’s first alcohol-free beer bar, and new brand Lucky Saint now has its 0.5% unfiltered lager on draught in hundreds of venues UK-wide.

Freshness is a challenge 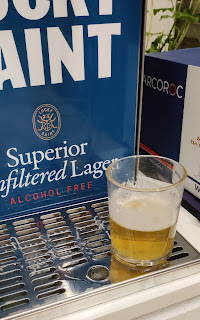 Why has it taken so long to get AF beers on tap? Well, there are challenges, said Lucky Saint’s Jimmy Adams: “The first thing is the line has to be cleaner – we have our own technician now to help with that. The second is the length of time it sits on the bar – we really need a keg sold in a week for freshness and quality.”

He added that the latter is a particular problem when a bar first offers AF beer on draught, as it can take four to six weeks before customers realise it’s there and start to order it regularly. Get past that though, and things can pick up.

“We find we’re doing 10% of the house lager [volume] in some bars,” he said. “The operator needs to understand they’re not going to sell six kegs of it a week, but at the same time, 55 pints of alcohol-free is going to be more profitable for them than 55 pints of house lager.”

“People who normally drink alcohol are more fussy over their AF choice,” added Laura. “Drivers for example often like to have one regular beer, then switch to AF. Sometimes it’s the AF drinker in the group who dictates where the group goes, because of the good AF choices.”

Think what you want of Brewdog’s top management and its company culture, but the brewery has invested a lot in its AF ranges since the debut of Nanny State. That was originally launched at 1.1% ABV as a retort to the frankly idiotic attempt by the nannies of the Portman Group in 2009 to ban its 18.2% Tokyo* Imperial Stout.

However, Nanny State quickly acquired fans before being relaunched at 0.5%, the legal max for being labelled non-alcoholic. Fast forward a few years, and Brewdog has an entire stable of AF beers available both canned and on draught. It recently added one more, in the shape of Elvis AF, and Ben had samples for us. Sadly, while it was pleasant enough drinking, it’s almost completely unlike Elvis Juice – sure, there’s fruit and beery notes in there, but they’re way too indistinct.

Back on the innovations front, I was surprised to discover that, despite all the work on low-alcohol yeasts and the like, there’s still brewers dealcoholising. Although in the case of Lucky Saint, its Bavarian brewers clearly know what they are doing. They use vacuum distillation then blend regular beer back in to add a little body and return the beer to 0.5%.

This also seems to be the kind of technique that’s allowed the big brewers to offer 0.0% beers – check on Ratebeer or Untappd and there’s a whole raft of these now. It’s not a cheap technology to get into, by all accounts, but if you want to sell in some parts of the world it’s your best bet.

*I’m not a fan of the whole Dryanuary schtick, as – in normal years, at least – it hits pubs and bars when they can least afford it, in the post-Xmas lull. Maybe with more and better AF options it could be less of an issue, but that’s a big ‘maybe’.