Drinking up a memory of Bass Cape Hill 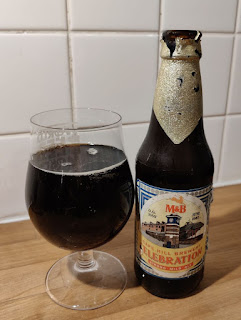 Acquired at some memorabilia sale a few years back, this bottle’s been at the back of my fridge pretty much ever since. Until today I pulled it out – and suddenly realised that I was quite possibly involved, albeit peripherally, in what was brewed to celebrate.

Some 35 years ago, I was invited to visit Cape Hill Brewery in Birmingham. Originally the HQ of Mitchells & Butler, or M&B as it was known in its brewing days, by the time I visited it was part of the Bass empire, and had just undergone a substantial refit.

That refit included a new computer control system running on a pair of DEC VAX minicomputers, which was the reason for my visit as I was deputy editor of DEC User Magazine at the time. This system allowed them pretty much to program the brewery to brew what they wanted, batch by batch, whether that be Brew XI, Stones Bitter, M&B Mild or whatever. These days you can buy a home-brew machine that does the same and fits on your kitchen work-top, but this was sophisticated stuff back then. 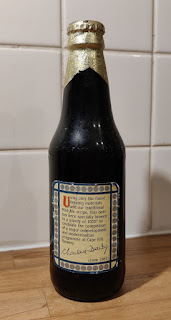 When Bass bailed out of brewing in 2000 the Cape Hill Brewery was sold, first to Interbrew and then to Coors, who closed it in 2002, just months after they’d bought it. It was demolished in 2005/2006 and housing built on the site.

Fast forward to today though, and here’s a bottle of Cape Hill Brewery Celebration Strong Mild Ale from June 1987, and yes, it’s still drinkable and fairly pleasant! The cap was still tight, perhaps thanks to the foil cover, and while the beer has only a slight fizz, it’s also only slightly oxidised for its age.

It’s dark and malty with a touch of gravy – that’s the oxidation – and a little sweet. There’s a slight hop character and not much bitterness, but then this is a Midlands mild, and it’s a little thin. No information on the ABV – the label just says it was brewed to O.G. 1055° – but given the sweetness I’d guess at maybe 5%.

Anyhow, that's my glass of history for today.