Willemoes: when is a Stout Porter not a Stout? 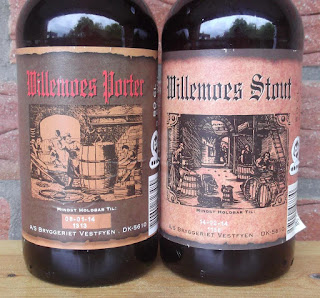 I'd not come across Vestfyen Brewery's Willemoes brand before our recent trip to Denmark, although it turns out I had tried a beer from Vestfyen before, but it was a naff and forgettable Eurolager, Vestfyen Classic.

All were good, the Porter especially so: it poured a deep red-brown, with a rich treacley nose with touches of chocolate, coffee and tobacco leaf. The body was full and drying and slightly sour, yet balanced with sweet notes. Flavours I picked up included black treacle, burnt prunes, liquorice, and something pleasantly reminiscent of old leather and aged port.

The deep black-red Stout was notably lighter bodied, some might even call it a bit thin. It still had a good flavour though, with faint aromas of toasted bread and malt followed by dry fruit and wine notes in the body.

It's tempting to look at these two beers though and think that someone on West Funen (Vestfyn) has missed the point. After all, historically "stout" meant "strong" and in beer terms was a contraction of Stout Porter, so shouldn't a brewery's Stout be stronger than its regular Porter?

Some would say not. This pair do match the BJCP Style Guidelines for Baltic Porter and Dry Stout pretty well, and according to that guide, and to many modern brewers, historical differentiation by strength is gone now, leaving distinctively different beer styles with their own characteristics. That's even before we add Imperial and Double (and Double Imperial!) versions into the mix... 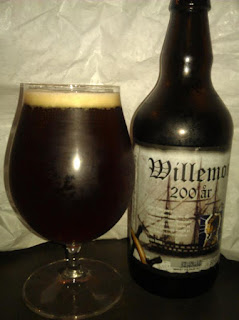 I'm not so sure though. These are historically-inspired beers, after all, complete with old wood-cut style labels and a historical name. Vestfyen's "speciality series", it's named after local hero Peter Willemoes, who distinguished himself as commander of a floating gun-battery in the 1801 Battle of Copenhagen, in which Nelson's ships destroyed a Danish-Norwegian fleet - that's the battle where Nelson was supposedly ordered to withdraw, but put the telescope to his blind eye, saying "I see no signal!" (It wasn't quite like that, but that's another story.)

Indeed, the 200 år bock was first brewed in 2008 to commemorate the 200th anniversary of Peter Willemoes' death in another naval battle, at the age of just 24. (Yes, as a 2nd Lieutenant a month short of his 18th birthday, he had been put in command of 129 men and 20 cannon. Different times...)

So it would be nice in a way if the beers followed 19th century norms, rather than 21st century. But whatever, Willemoes is a name I will be looking out for in the future.
at 9:00 am